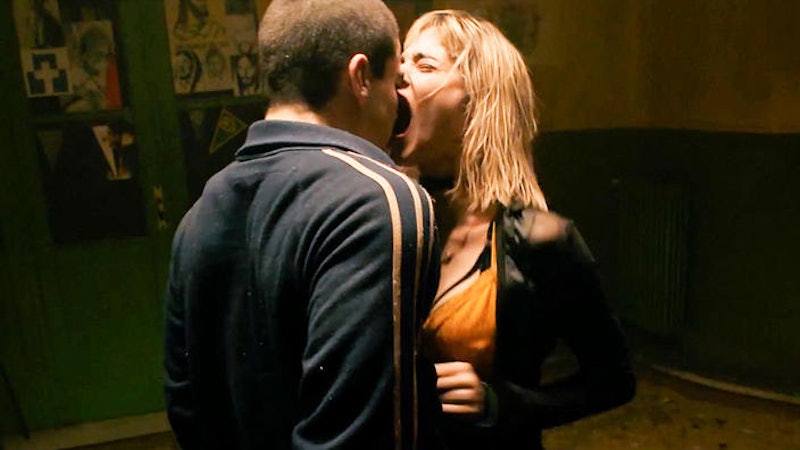 Garspar Noé’s films often explore the theme of people losing control under the influence of drugs, but his latest flick is unlike anything you’ve seen before. Climax, out Mar. 1, is a psychological horror film about dancers who lose their minds at a party after their sangria is spiked with copious amounts of LSD. What unfolds is pure chaos and violence, with grim consequences. The director's work can be very disturbing and meant to make the viewer feel uncomfortable, but how scary is Climax?

This one is more on the disturbing than scary, but either way, it's definitely not for the faint of heart. In an interview with The Guardian, Noé jokingly expressed his disappointment in audiences not finding it shocking enough compared to his other movies, after reporter Xan Brooks told him that six or seven people left the theater midway through the film. “Aw man, no, no, no! I usually have 25 percent of the audience walking out,” said the filmmaker, who also made Enter the Void and Irreversible. But given how it’s not too common to see people walk out of a horror movie if they came to be scared, it sounds like Climax is still too intense for some horror fans.

Major spoilers for the film ahead. But the scariest part of Climax is that the event begins so innocuously. The dance troupe is celebrating being done with rehearsals and just wants to have some fun at a party. They’re standing around, gossiping and bonding over drinks and dancing. But once the sangria is spiked, everyone changes, and plenty of horrifying things occur, including someone’s hair being set on fire, a woman mutilating herself with a knife, people mercilessly beating each other up, suicide, and someone freezing to death.

And, to make matters even more terrifying, Noé said in an interview with Candid Magazine that the film is based on a real event, though he didn't go into much detail about it. “It was based on a true story; but that story has a much smaller scale, than the one I presented in the film. Yes, there was a party, things turned sour when they had their drinks spiked, but nothing really bad happened,” explained Noé. Though luckily, the real party it was based on didn’t end on a grim note, Noé still assures that it’s still closely tied to it, just far more extreme.

“It’s an overall true story, but some things are exaggerated. Like I didn’t respect the original amount of people. We invented a lot of the personal storylines. It’s based on a real story, but I altered it a lot. Like in real-life all the majority of dancers were white,” explained the director in the same interview. “Every day, you read in the papers stories that would make great movies. But then if you want to stick to the real story, you have to use the real names and then be respectful of everything and that becomes tricky territory. Especially in unsolved cases, you bring your own mental perception of the situation, so it’s good to change things so as you are not restricted with the outcome.”

To make the movie feel even more realistic, Noé didn’t cast any professional actors, with the exception of its star, Sofia Boutella (who is also a professional dancer). Instead, he cast dancers. In an interview with VICE, he discussed how he ended up choosing the cast. “It turns out that black and mixed-race people make up more than half of the cast, because I picked them according to their talent as dancers, and their sympathy. Some of them were so nice that I was like, ‘Let’s see what we can improvise together.’ I just wanted to film them!”

In the aforementioned interview with Candid, the filmmaker also noted that there was no script. Instead, he gave the cast suggestions on where he wanted them to take the story. “I knew the start point and the end point, but I didn’t know the in-between,” explained Noé. “For example, initially I thought Sofia Boutella’s character, Selma, would end up with a boy, then I thought maybe I could be a girl. When I met the Russian girl dancer and I asked Sofia if she minds ending up with her, she didn’t… so the whole thing was quite organic. Then I didn’t know how the story of the DJ would end… oh maybe he ends with the young dancer… But everything was shot in chronological order, which keeps the door open for any kind of re-writing.”

Climax is a horror film that’ll feel simultaneously realistic and implausible, but that paradox is what makes it so fascinating and worth checking out — if you can handle it.