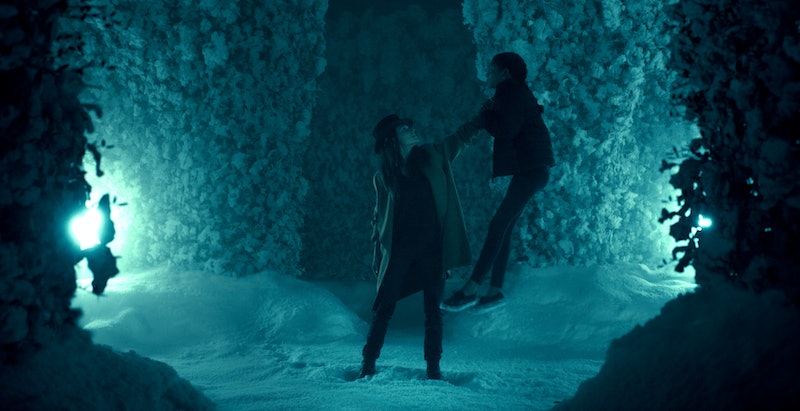 Following up what's widely considered the most frightening novel and greatest horror film of all time is no easy act, but writer/director Mike Flanagan (The Haunting Of Hill House) not only welcomed the challenge, it's the reason he took on Doctor Sleep (out Nov. 8). Depending on your stomach for torture both cold-blooded and emotional, and whether you like your horror slow or speedy, how scary you find Doctor Sleep will vary. But you're likely to get some goosebumps, no matter what.

The film follows The Shining's Dan (once Danny) Torrance (Ewan McGregor), now grown and struggling with demons both hereditary and more literal. Taking a job as a hospice nurse while sobering up, he's able to use his shine to help the dying pass more peacefully. Simultaneously, a young girl Abra (Kyliegh Curran) with clairvoyant powers even stronger than his has "found" him, and the two communicate psychically as she grows up.

Unfortunately her powers draw the attention of Rose the Hat (Rebecca Ferguson), leader of the True Knot. This group of psychic vampires feed on "steam," which is the psychic essence they torture out of those with shining powers in order to live indefinitely. The True Knot, and especially Rose, are brutal and cold, and now they're gunning for Abra.

While in the book, the True Knot are intentionally campy, or as Flanagan described them to Cinema Blend, "silver-haired, plaid, geriatric vampires" who went for a "kitschy, polyester, RV culture," the film features a "new, very weird, and darker" version — think American Gothic meets southern charm. Doctor Sleep also (literally) shows more of what they're capable of, with an extended scene of one young victim's death (Room star Jacob Tremblay in a harrowing cameo) that traumatized the adult actors just filming it. Speaking to Digital Spy Flanagan said, "Rebecca couldn't even get her lines out, because she was so horrified. You see Rose the Hat just stammering." He added, "There's a huge amount that you guys will never see, because it's too much to handle."

If you want a taste of what Flanagan can do with Stephen King material, look no further than his 2017 adaptation of Gerald's Game, on Netflix. One of King's most insular, limited works (the majority of the story is a single character, Jessie, handcuffed to a bed and unable to escape), Flanagan turned it into a psychological slow burn with occasional monster appearances. While other directors might have used the Moonlight Man (a terrifying pale, giant apparition holding a bag of bones) as a straight slasher scare, Flanagan treats it as another facet of Jessie's excruciating psychic struggle against herself.

As far as Doctor Sleep, there's also the looming matter of Room 237. Those familiar with Stephen King's 1977 novel and/or the 1980 Stanley Kubrick film will likely wonder which this film follows more closely. Flanagan said in a Q&A, per Slash Film, that the movie is "an adaptation of the novel Doctor Sleep, which is Stephen King’s sequel to his novel, The Shining. But this also exists very much in the same cinematic universe that Kubrick established in his adaptation of The Shining, and reconciling those three at times very different sources has been the most challenging and thrilling part of this, creatively, for us." The film has the approval of both King and the Kubrick estate, and in a bold move, features the same twins, elevator full of blood, and woman in the bathroom that terrify in The Shining. Flanagan uses them towards his own ends, with Danny having to face his past to move forward with his future.

So whether you're a fan of the original sources or just appreciate Flanagan's quieter psychological horror, Doctor Sleep delivers disturbing moments without overt scares, while revisiting some of horror's most iconic moments.

More like this
'Girls Trip 2' Will See Our Fab Four Enjoy An International Adventure
By Maxine Harrison
What Is Mary J. Blige’s Net Worth? The 9-Time Grammy Winner Is Doing “Just Fine”
By Hugh McIntyre
Taylor Lautner Copped To Finding Jacob "A Little Annoying" In Twilight
By Stephanie Topacio Long
James Cameron May Come To Regret His 'Titanic' Door Experiment
By Stephanie Topacio Long
Get Even More From Bustle — Sign Up For The Newsletter
From hair trends to relationship advice, our daily newsletter has everything you need to sound like a person who’s on TikTok, even if you aren’t.