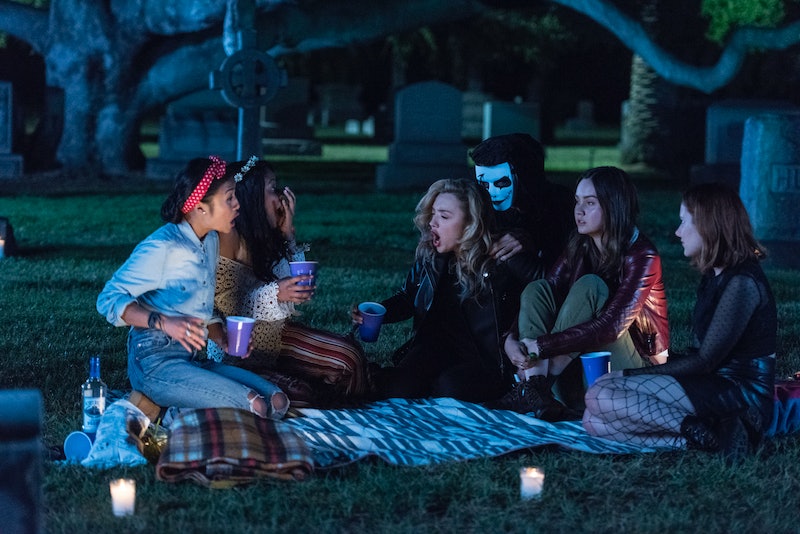 The Hulu series Light As A Feather arrives on October 12, leaving audiences just enough time to watch the full season before the Halloween season is over. The teen-centric series is appropriately spooky fare for the season, but just how scary is Light As A Feather? The show centers around a Final Destination-style setup where five girls who play a suspiciously intense game of "Light As A Feather, Stiff as a Board" end up meeting disturbing fates. While there's no telling just how gory and creepy things will get, viewers should expect Light As A Feather to be a lot more Halloween and a lot less Halloweentown. (ICYMI: The latter is not scary at all.)

The show's premise is undeniably creepy — the idea of being haunted by some kind of unstoppable evil that has been summoned through a seemingly innocent child's game is so enduring and frightening that it inspired the entire Ouija board market. Beyond that, however, Light As A Feather seems to be bringing some scares in the form of body horror. The series' trailer showcases some especially grotesque imagery that may be a marvel for make-up aficionados, but will gross out just about everybody else. The sight of skin melting off of someone's face or an hard-to-describe image of a spine growing out of someone's back succumbing to a state of a decay may be pretty intense for a teen-aimed television show — but then again, this isn't television. This is Hulu, meaning Light As A Feather is free to get as scary and grotesque as the creators would like.

While the show will surely be too gross for some, it'll scratch the itch for anyone looking for some supernatural scares this Halloween season. The supernatural force behind the Light As A Feather curse will appeal to everyone who loves stories about ghosts or forces from beyond. Unfortunately, for many viewers, the only way to tell just how scary Light As A Feather is will be to watch it for oneself. If you're not a fan of the horror genre and don't like being made to feel tense when watching television, then you may want to skip Light As A Feather, or at least watch it through your fingers.

That being said, Light As A Feather isn't the scariest thing on TV this Halloween season — which isn't necessarily a bad thing. The show does still have a plot and a mystery to unfold, so it can't spend all of its ten episode trying to find new ways to horrify its audience. It's likely going to have a few truly chilling moments, but it hardly compares to a show like American Horror Story which throws increasingly violent and disturbing new creations and events at its viewers every episode. When it comes to scary shows, Light As A Feather is on the lower-middle end of the spectrum, which makes it perfect for anyone who is looking for a Halloween show to get them in the mood for a season of screams and scares.