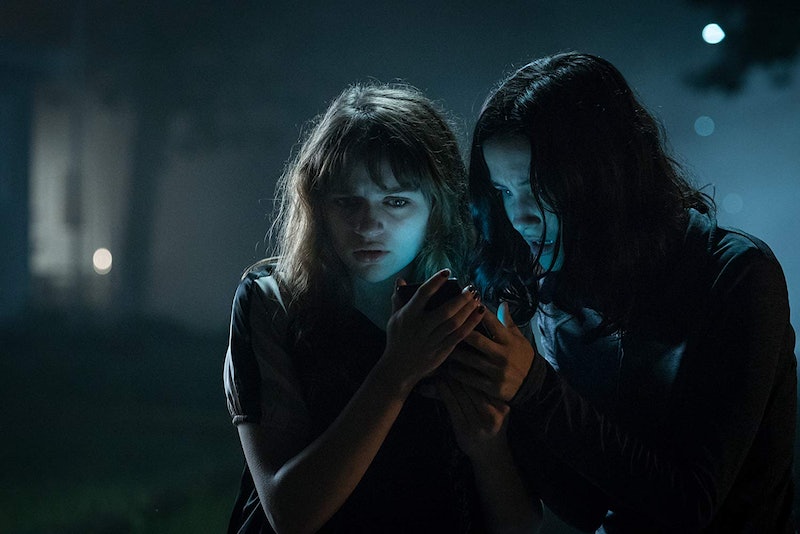 The internet can be a terrifying place all on its own, but Hollywood is now mining specific memes for their own horror movie premises. The latest comes in the form of Slender Man, out Aug. 10, which tells the story of a very tall, slim, blank-faced man who may have something to do with the demonizing and kidnapping of children in Massachusetts. Slender Man began as a concept on the web forum Something Awful before being commandeered by fans who crafted everything from videos to stories of their own containing the foreboding character. As the release of the film looms: both those who have familiarity with the lore and those uninitiated need to know just how scary the Slender Man movie is. Well, the answer may lie in the question itself.

The new movie stars Joey King and a group of other young actors as teens who become determined to predict that Slender Man is a hoax; the narrative in the town they occupy changes when someone in their circle goes missing. The trope of protagonists not believing in an ominous creature until it's too late has been done to death, but considering the debate about whether a real-life Slender Man exists rages on, the plot could prove a worthy anchor for the flick.

The trailer itself ticks all of the boxes for a summertime scary movie. From the demonic haunting of children to the slimy tentacles of Slender Man, threatening at every turn. Plus, the titular character is only seen in quick cuts, leaving an aura of wondering in every frame. And while this film is only rated PG-13, often an indication that the movie might skimp on the scares, audiences can look again to the real-world ties in order to assess if Slender Man is worth a watch.

After the myth behind Slender Man gained cultural awareness, it was revealed as the rationale behind a stabbing committed by two 12-year-old girls in 2014. The victim, also 12, luckily survived, and the perpetrator was declared mentally ill, but the character's disturbing impact on a sliver of society was made clear.

And while the real-life tragedy behind it has the potential to make the film even scarier, it's also been the cause for some debate about whether a fictionalization of the Slender Man character should even exist. Some people have argued that a movie could sensationalize a fictional idea that has motivated actual violence, while others have stated that the film will avoid this sticky territory by depicting a completely original take.

Having an understanding of the foundation for a villain like Slender Man may influence the ability with which you're able to feel truly terrified. Whether you're an expert in the lore of the tall, slender creature, or are being exposed to it for the first time upon entering the theater, there's a level of creepiness to be found. Any character with such easily definable characteristics, and yet such mysterious origins, makes for a scary good premise. Slender Man has proven an ability to take hold of the cultural conversation, but only time will tell if it'll be able to capture true cinematic shock.