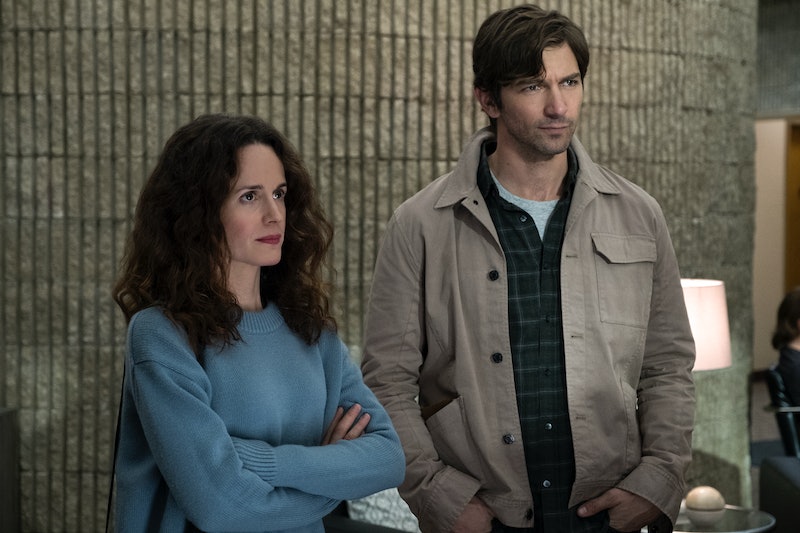 Spoilers for The Haunting of Hill House Season 1 ahead. Netflix's new horror show, The Haunting of Hill House, has no shortage of ghouls and ghosts. There's the mangled Bent-Neck Lady who's followed Nell for decades, the symbolic Mr. Smiley terrifying one of Theo's patients; and the vicious, zombie-like creature young Luke finds lurking in the basement, to name just a few. But while these figures are all deeply disturbing, the scariest part of The Haunting of Hill House isn't the monsters — it's the emotional terror that latches onto one family and never lets them go. Warning: This article contains information about suicide, which some may find triggering.

The chilling, ten-episode series follows the Crain family, switching between present-day and the kids' childhood, when they lived in a maybe, definitely haunted mansion called Hill House. Shirley, Steven, Theo, Luke, and Nell moved into the house with their parents, Olivia and Hugh, to fix it up and sell it off, but soon realized there was something deeply wrong with the property. Just in the first three episodes, a young, horrified Nell wakes up to find the Bent-Neck Lady hovering mere feet above her bed; Luke uncovers a secret basement and encounters a rotting corpse come back to life; and Theo stumbles across what looks to be her mother, but with half of her face missing. It's also revealed that, before they fled the mansion for good, Mrs. Crain committed suicide there.

That would be enough to scar anyone for life — and it has. Throughout the time jumps, it becomes clear that all five children have been profoundly traumatized by their short stay in the house. Steven grows up to be a successful but hardened author who refuses to acknowledge what happened in their childhood, but eagerly exploits it as fodder for his novels. Shirley, who owns a funeral home with her husband, is cripplingly preoccupied with death, and has spent her life trying to be a stand-in mother to her siblings in place of the one they lost. Luke is a drug addict, and Nell, still tormented by the Bent-Neck Woman, is eventually driven back to Hill House to hang herself.

And then, finally, there's Theo, a child psychologist who has closed herself off from everyone else around her. She wears gloves because she can sense things, psychically, through touch, but also because she feels too much, and that weight is too exhausting for her to bear. "When I was scared, I would imagine myself building a big wall all around me made of the strongest bricks in the whole world," she explains to a young patient in Episode 3. "And when I got scared, I would imagine myself putting another one on, one after the other, until that wall was so thick and so strong, I knew I'd be safe in there forever."

The terrors of the mansion, then, are a mere backdrop for the Crains' real pain. The grief of losing their mother — and later, Nell — are more harrowing than anything they may have seen in Hill House. It's those memories that haunt them the most, not the manifestations of them.

As Steven says in the first episode, "When I say I've never seen a ghost, it's not exactly true. I've seen a lot of ghosts — just not the way you think. A ghost can be a lot of things — a memory, a daydream, a secret, grief, anger, guilt."

So yes, The Haunting of Hill House is filled with genuine horror and plenty of jump scares, but it's the personal demons, not the paranormal ones, that will keep you up at night.

More like this
‘Squid Game’ Creator Hwang Dong-Hyuk Just Dropped A Major Season 2 Tease
By Brian Anthony Hernandez and Bustle Editors
Nicola Coughlan Shared A Lady Whistledown Excerpt From ‘Bridgerton’ Season 3
By Grace Wehniainen, Alyssa Lapid and Sam Ramsden
'Heartstopper' S2 Just Welcomed Four Brand New Cast Members
By Nola Ojomu and Sam Ramsden
Viserys’ Fate On 'House Of The Dragon' Could Differ From The Book In This Surprising Way
By Grace Wehniainen
Get Even More From Bustle — Sign Up For The Newsletter