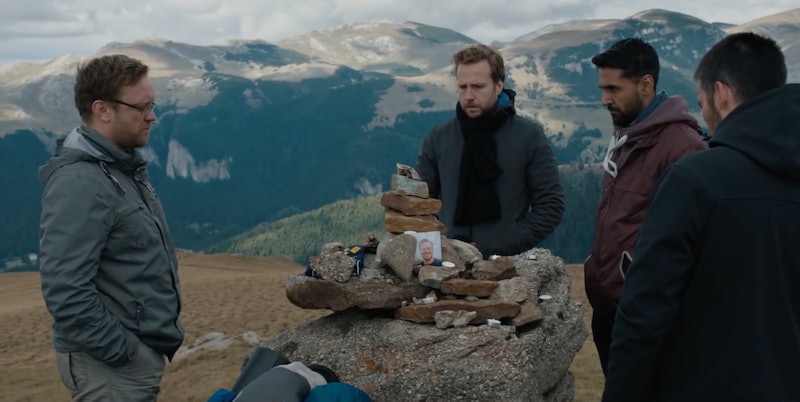 The Ritual (costume designer: Ana Ioneci) comes out on Netflix on Feb. 9, and it might be one of the scariest movies you've seen in a long time. It's set on the rolling hills of Sweden, as four friends embark on a backpacking trip to commemorate their adventurous friend whose gruesome murder takes place right at the beginning of the movie. If that sounds like the perfect recipe for a freaky-deaky film, it's because it is. But just how scary is The Ritual on Netflix? Well, the movie starts with a gruesome murder, and it only gets scarier from there.

The four men who set out on Sweden's "King's Trail" are prime characters for a movie about a haunted outdoors expedition because they're not necessarily outdoorsy people in the first place. Luke (Rafe Spall), Hutch (Robert James-Collier), Dom (Sam Troughton) and Phil (Arsher Ali) only agree to hike the mountainous trail as a way of remembering their late friend, Rob, who'd suggested hiking the trail on the day of his death.

After reaching the peak where they erect a shrine for Rob, Dom twists his ankle. Rather than stay on the well-traveled trail, the group decides to cut through the woods to shorten their hike home. As with any movie about people leaving the safety of a clearly marked trail, the four friends find themselves in a haunted forest filled with terrifying twists.

Even just from the trailer, you can tell that the darkly shrouded forest immediately reveals a bad omen of an eviscerated moose hanging from a tree. Throughout the film, you wonder what creature could have put the moose up there — which in some ways makes it similar to Harry Potter and the Chamber of Secrets, but unlike in the 2002 children's movie, the characters of The Ritual have no access to magic nor do they have any clue about what's happening. In other words, if you thought that the basilisk in Chamber of Secrets was scary, then you will find The Ritual's monster paralyzingly scary. That doesn't even cover all of the other terrifying happenings that take place in the forest, like satanic religious ceremonies and mysterious disappearances.

The Ritual is based on a 2011 novel by Adam Nevill, according to the AV Club, and even though it sounds a lot like The Blair Witch Project, the style is completely different. However, it's not like nothing you've ever seen before, and that's partly because the movie's director, David Bruckner, is well-known in the horror genre. Despite having directed parts of well-known horror movies, like 2007's The Signal and 2012's V/H/S, The Ritual marks the director's first feature film.

Because of Bruckner history with the genre, critics have expressed their disappointment over the lack of imagination used in The Ritual, but that shouldn't stop you from seeing the new Netflix movie. With so many mysterious and shadowy shots of strange findings in the forest, you will get exactly what you're looking for from The Ritual: a full on freak-fest.

Because the movie that everyone called the "scariest movie at Sundance," Hereditary, isn't set to hit theaters until June 8, you need to get your horror fix from somewhere. The Ritual will deliver the suspense and intrigue. It may not have Toni Colette screaming her head off like Hereditary does, but it does have a group of overly confident grown men finding themselves lost and afraid in the woods, so it is still a fun — and scary — watch. And hey, it's almost Galentine's Day; snuggle up under the covers with your BFFs to watch the movie, and squeeze hands every time you feel scared. That will make it all OK.