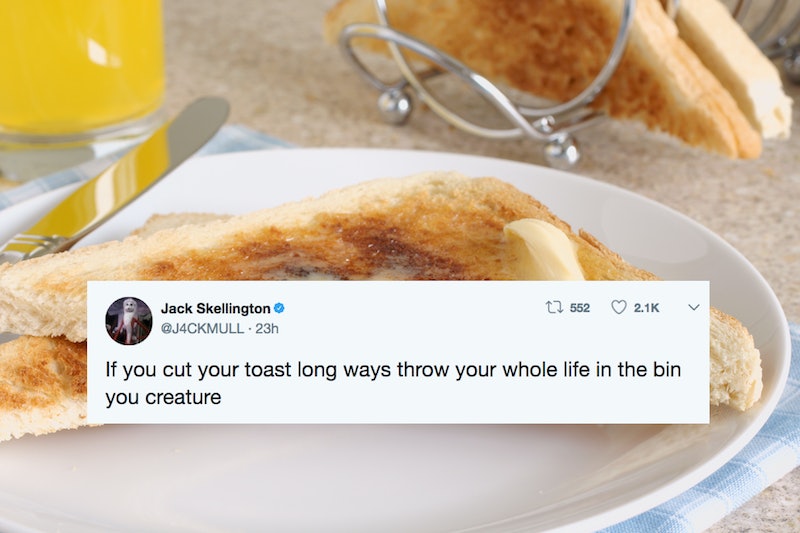 Every now and then, if it was a special occasion or she wanted to be extra fancy, my mom would make me buttered toast sprinkled with cinnamon and sugar, and she'd cut it diagonally. Diagonal meant something special. As an adult, I don't dare to cut my toast diagonally any old day of the week. What's the best way to cut toast, then? The not-so-innocent question was proposed on Twitter by Sheffield Hallam University, who presented tweeters with three options: my mom's fancy diagonal cut, cutting it across horizontally, and cutting it vertically. "How bad could this get?" you're saying. "It's just toast, after all," you're saying. "It all goes in your mouth and into your belly, and it's delicious either way. So really, who cares? What kind of jam are we using?" you're saying. Besides, everyone probably cuts their toast lengthwise, like I always have, right?

Wrong. I was so wrong. People had opinions, strong ones, and not just about the way you cut the toast. There were also complaints about the level of toastiness and the lack of butter on the crusts. Crust matters too.

But that's a debate for another time. Right now, let's focus on what really matters. Here's the tweet that started it all. So harmless! Or was it?

Initially, this only made me crave toast and that was about it. Then I looked more closely at the second option and wondered what kind of insane human would do such a horrible thing. It turns out... there are plenty of insane humans who would do such a thing. In fact, for some people, this is the norm. (Who are you?!) This will officially go down in history as the day that ruined toast for me.

Thankfully, I had a few people in my corner who obviously understand the delicate intricacies of toast cutting.

While I can see this being a viable option if you're making half a sandwich, all other situations warrant a different cutting method. If you're not going to fill it with delicious meats and cheeses, why cut it horizontally? Sadly, many would disagree with me.

That wasn't even the most surprising of it, though. Many others — many, many others — were personally offended by the third option, my go-to.

It's the toast that sent the internet into a tailspin. Apparently, if you know someone who cuts it lengthwise, remove their toxicity from your life, because it's bad for your emotional health.

The conversation doesn't end there, though. There were plenty of other people who insist that my mom's fancy schmancy diagonal approach is the only appropriate way to cut toast. Not just for Christmas. Not just for birthdays. Oh no. Diagonal is the only way, all day, every day.

Some tweeters had another approach entirely — since cutting your toast any of these three ways is apparently for weenies, losers, and degenerates. I'd like to point out that the following method can work but strictly for when you're making birdie in the nest (you know — cooking an egg inside the toast in a pan?).

This guy doesn't have time for your shenanigans. Give him whole toast, or give him death.

And then there were the people so deeply offended, so disgusted, so baffled by the lack of care in properly toasting and buttering the bread in the first place that they couldn't even begin to think about how to cut the darn thing. Because really — if it isn't toasted and buttered to perfection, everything else is a moot point.

In my heart of hearts, I know the truth. On any average day, number three is the way to be. Number two is a sin. Number one must mean someone got promoted or pregnant. But all toast deserves love; and if you prefer number two, I guess we can still be friends anyway. You're welcome.