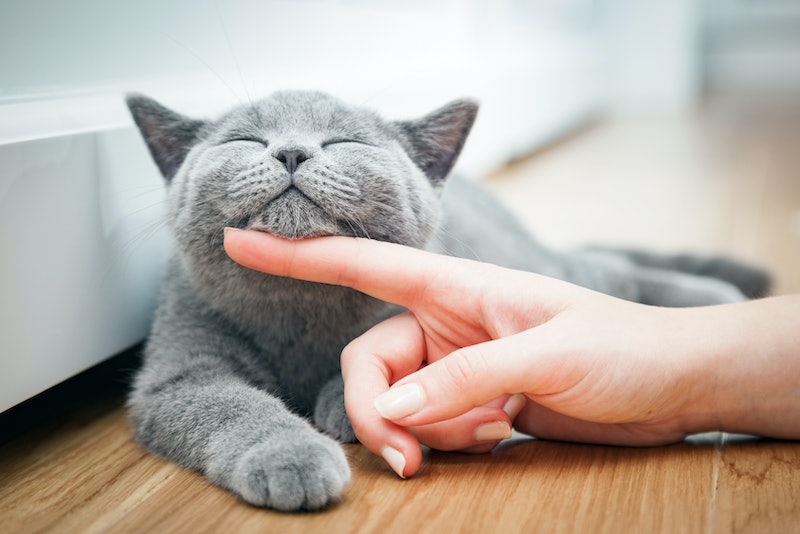 Even tried and true cat people will admit that cats aren't exactly known for their unconditional love. Unlike their canine counterparts, kitties are often slow to show affection, quick to remind their humans that they're just fine without them, and discerning about who they choose to spend their time with. As a result, if you truly want to cozy up to a cat, you need to be sure that you have the right approach. Not all petting methods, for example, are created equal. So how should you pet a cat to maximize your chances for human/feline bonding? Friends of cats — and aspiring friends of cats — pay attention, because you need all the help you can get to cozy up to these adorable, independent creatures.

Cat behavior specialist Pam Johnson-Bennett noted on her site that the cat community's reputation for being aloof (the one I so shamelessly repeated above) may not be entirely fair, especially since they can be quite affectionate when approached correctly. "Most cats also enjoy being petted and touched, but there are right and wrong ways to do it," she wrote. So, touching a cat the wrong way can antagonize kitties, prompting them to scratch or bite out of protection or discomfort. Naturally, we want to avoid that by setting everyone involved up for a successful, loving interaction.

Let's take things step by step, because — in case you haven't figured it out yet — cat-petting etiquette is actually a lot more specific than you might think.

Apparently, we're not the only species that puts a high premium on personal space. According to Johnson-Bennett, there will be times when a cat just wants to be left alone. When you fail to pick up on cues that might indicate this — the cat sitting alone at the window, or hanging out under the bed (or in other clearly "people-free" areas) — you risk an unfriendly interaction with your feline friend.

Johnson-Bennett noted that a cat's behavior and body language can also give you a hint as to how open it is to affection at any given time. If it rubs up against your leg, kneads at you,or jumps up to sit with you on the couch, it's probably a safe time for some petting.

Let The Cat Sniff You

This step is particularly important if you're dealing with an unfamiliar animal, but it doesn't hurt to make it a habit even with your own pets. WIkiHow recommends that you extend a hand or finger and wait for the cat to touch his nose to it. If it looks at you suspiciously or walks away, now might not be the best time for some pettin'. If it meows or continues to interact with you, you're good to move on to the next step!

Focus On The Right Spots

Per Vetstreet, cats most enjoy being petted in the areas where their scent glands are concentrated. Scratching these spots makes their environments smell familiar and gives them a chance to mark you with their own personal aroma. Focus on petting the base of the cat's chin and ears, the cheeks behind their whiskers, and the base of their tail.

Know When To Back Off

If and when a cat has had enough of your TLC, you can rest assured that it will make its feelings perfectly clear. Watch for behavioral red flags — according to WikiHow, the cat might flatten its ears against its head, twitch its tail, fidget, growl, or hiss — and then quit the love fest before things take a negative turn.

If you follow these steps, I have a good feeling that you'll be on your way to making countless feline BFFs.