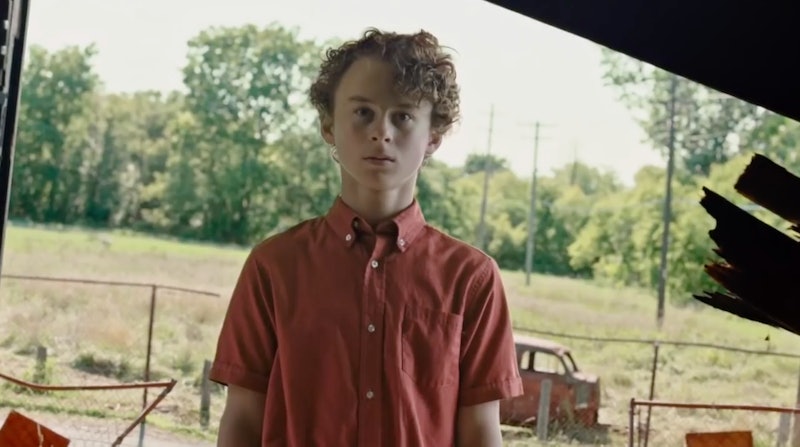 Content warning: This article contains information about suicide, which some might find triggering. This arcle also contains spoilers for It Chapter Two. Returning home to Derry, Maine was never going to be easy for the members of the Losers Club, blood pact or not. But for one member of the group, there would be no reunion, no gratifying emotional character arc to experience, no closure to decades of repressed trauma in It Chapter Two. Stan (Andy Bean) opts to take his own life rather than confront the revivified horrors of It (Bill Skarsgård). Though his death is pulled directly from Stephen King's 1986 novel, unique to the film is a letter Stan wrote before his death by suicide, and its inclusion not only fails Stan as a character but also dangerously glorifies his decision to take his own life.

Over the first act of It Chapter Two, Bill (James McAvoy), Beverly (Jessica Chastain), Richie (Bill Hader), Ben (Jay Ryan), and Eddie (James Ransone) each find their own reasons for reuniting with their old friend Mike (Isaiah Mustafa), the only one who stayed in Derry, to conquer the specter that haunts their shared past. Stan, however, dies early in the film. Following Mike's call to return, he deems himself unfit to confront the traumas and horrors in his past and decides to take his own life.

At this point, each of the Losers is very much grown up, but their ties to their past traumas and horrors are readily evident. For Beverly, her past echoes in her abusive husband, who physically abuses her in the same way her father abused her many years ago. For Bill, it's in his wife, who bears a striking resemblance to a younger Beverly, to whom he vents his inability to control or imagine an ending for his story. For Ben, it's in his unprofessed love for Beverly; Eddie, in his wife who treats him much like how his overbearing mother did; Richie, in his use of self-deprecating humor to hide himself; Mike, in his inability to escape from the past, literally confining himself to Derry to act as lookout. But Stan is presented as being somewhat "stable" and happy, at least at first. In the moments before Mike calls, Stan's wife books an international trip for the two of them as he quietly finishes a puzzle. He's made to seem comfortable. He's made to seem safe. But only minutes after that, he's shown getting into a warm bathtub, contemplating the immediate aftermath of the Losers' battle with It, and eventually taking his own life.

Stan's absence is noted in passing at a few points in the film, but for the most part his suicide is accepted as a sign of "weakness," as noted by Richie. That is, until the film's end, when, following their slaying of It, Mike reaches back out to Bill one more time to ask if he had "gotten that letter." Mike checks his mail to find that Stan's wife has sent them all copies of a letter her husband wrote to the Losers before his death.

Stan writes about his reasoning for taking his own life, saying that he knew that they would all have to be united in their confrontation of It, and since he was still plagued with doubts and fears, his presence would compromise their mission, so he "made the only logical move" and "took [himself] off the board." It's a cold calculus, to be sure, one that's presented in such a way that it comes off as some sort of noble sacrifice, one that's supposed to flip his ignoble death to a heroic one. But none of that quite adds up.

It feels as if the takeaway here is supposed to be that success comes only by cutting out weakness, that it's somehow a good thing to "take yourself off the board" when you're not sure you're strong enough to survive something. But that conclusion flies in the face of the lessons the Losers learn throughout the movie.

All throughout Chapter Two, It works desperately to isolate its victims, as it's in isolation that fear can breed and run rampant. Each of the children Pennywise eats in the film are only eaten after it manages to lure them away from adults, and the Losers are all separated after they perform the Ritual of Chüd, forced to confront their worst fears and anxieties or perish.

The only way the Losers survive is by relying on each other. And it's only together that they learn they can collectively force It into a form they could easily defeat. So why treat Stan's letter as some sort of heroic denouement? He wasn't shown as having learned the lessons they learned, and the language of the letter even suggests that he expected them to read it only after they had defeated It. So why pack it with hopeful messages when his character arc made so few references to even having said hope?

Suicide is an incredibly tragic, violent act, and to frame it here as a calculated, heroic move is not only irresponsible, but dangerous. Consider Netflix's 13 Reasons Why, which is a show about Hannah (Katherine Langford), a young girl who dies by suicide, but not before sending recordings to the people who drove her to take her own life. Following the show's premiere came a study published in the Journal of the American Academy of Child & Psychiatry, which showed that "the overall suicide rate among 10- to 17-year-olds increased significantly in the month immediately following the release of 13 Reasons Why."

In a statement to CNN, the study's first author, Jeff Bridge, said, "Youth may be particularly susceptible to suicide contagion," and that contagion can be "fostered by stories that sensationalize or promote simplistic explanations of suicidal behavior, glorify or romanticize the decedent, present suicide as a means of accomplishing a goal, or offer potential prescriptions of how-to die by suicide." Though the study found "no significant change in level or trend of suicide" in adults after watching the show, there is still substantial evidence to suggest that suicide contagion is still a legitimate concern among all age groups.

The CDC has published a guideline for media outlets reporting on suicide, urging writers to avoid glorifying or sensationalizing the person's death. To wit: "News coverage is less likely to contribute to suicide contagion when reports of community expressions of grief (e.g., public eulogies, flying flags at half-mast, and erecting permanent public memorials) are minimized. Such actions may contribute to suicide contagion by suggesting to susceptible persons that society is honoring the suicidal behavior of the deceased person, rather than mourning the person’s death."

It's in that recommendation that the problem with It Chapter Two's ending is revealed: there is no critique or mourning for Stan in the ending. While yes, he's mourned for the barest of moments after the Losers find out in the first act, and yes, the audience is presented with the effects of his death, these moments are shown shown only in passing with nothing but some tears and a few distraught cries before it's all tossed to the side to move the plot forward. The only revisitation of his death comes at the end, in this letter that, again, is made out to paint him as a hero for doing what he did. It glorifies and romanticizes his suicide, when really, it should be shown as anything but.

In an interview with Slash Film, director Andy Muschietti commented on the ending, saying, "I’m proud of the emotional conclusion to this story, probably because it’s the thing that still gets me when I see the movie after watching it like 200 times." However, with the movie-only addition of this final letter, even the most optimistic of readings — one where we imagine that this ending won't result in any increase in suicidal ideation — leaves this emotional conclusion feeling a bit limp. It's a conclusion that feels unearned and too much like a massive reach for a neat and tidy ending. But that's not how suicide works, in this world or any other.