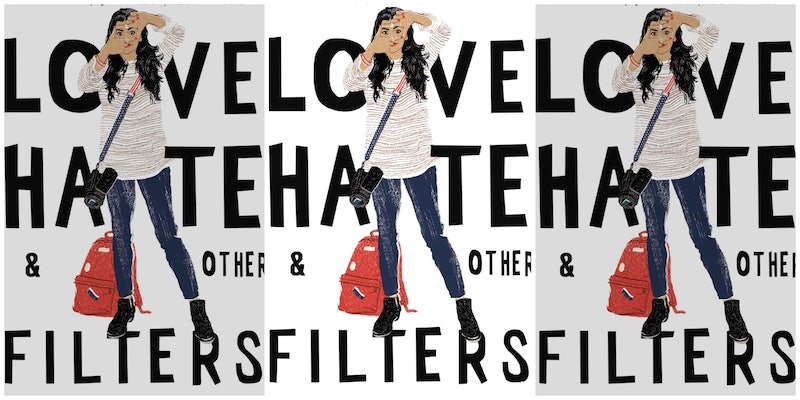 Young adult author Samira Ahmed remembers her first experience with racism vividly. “I was about seven or eight years old, in the midst of the Iran Hostage Crisis,” she tells Bustle. There was quite a bit of anti-Muslim sentiment in America at the time, and the Ahmeds were trying to blend in as much as possible.

“One day that summer, inching forward in a traffic jam, my parents chatting in the front seat, I rolled down my window as a car came even with ours — two adult men sat in the front seat. They turned my way. The man in the passenger seat made eye contact with me, rolled down his window and pointed his finger at me — a child, too puzzled to look away — and yelled with a guttural ferocity, “Go home, you goddamned f*cking Iranian.”

Many memories from Ahmed’s childhood have faded over the years, but not this one. “That scene is perfectly etched in my memory,” she says. And she’s not even close to the only child to experience such horror. That memory is where the seed of her debut novel Love, Hate, and Other Filters originated.

The book centers on 17-year-old Maya Aziz, who has the most normal of aspirations: She wants to have a regular American childhood, and she wants to fall in love and pursue her art. It shouldn’t be too much to ask, and yet Maya is constantly pulled between her all-American upbringing in an Illinois small town and her Indian Muslim heritage and culture.

Maya’s parents want what’s best for her, but their definition of "best" doesn’t coincide with her desires for her own future. "A natural tension exists between parents and children," Ahmed says. "I mean, the ultimate job of a parent is to raise a child who can exist independently, successfully without you. And it must be such a strange thing to love and raise someone just to let them go, hoping they’ll never really leave."

"I mean, the ultimate job of a parent is to raise a child who can exist independently, successfully without you."

This dynamic is especially important when it comes to the children of immigrant parents, something Ahmed wanted to explore in her first novel. "I used to say that my parents used up all their sense of adventure just to get [to America] and then the greatest thing they could do for us was to give us stability and comfort because they willingly gave up their own to come here," she says. "It’s natural that they want to be overprotective; it’s natural for them to have fears for their children, especially when their childhoods were so different."

But where does that leave the children who have grown up in American culture? Often times, they are forced to fight for the ability to make their own choices, and that’s exactly struggle Maya faces in Love, Hate, and Other Filters. She embarks on her own hero’s journey in this novel, inspired by one of pop culture’s most iconic heroes.

"One of the first movies I ever saw in the theater was Star Wars,” Ahmed says. "I was a kid. I remember standing in line at the Geneva Theater, waiting to buy tickets. It was a tiny little theater in a small town next to the one I grew up in. Star Wars mania was at a fever pitch and I don’t think I will ever feel again the exact degree of joy and anticipation I had as I did waiting in that long line. It was so pure."

Luck Skywalker's uncle, Owen, particularly resonated with Ahmed, who saw his strict nature as a reflection of the world she knew well. "Luke’s aunt and uncle could totally be Maya’s Desi parents," she says. "They’re hard working, earnest. They love Luke, but are overprotective because they fear what could happen to him in the world beyond the farm. They have expectations of what he should do even though they know it’s not truly what he wants and that he is destined for more."

But the wider universe — the struggle between the Rebellion and the Galactic Empire — was so much bigger than the rules that held Luke back as a teenager. And so is the racism that exists in Maya’s world.

Luke’s journey in Star Wars might be magical, but Maya’s is all too real. Not only must she contend with the growing pains of being a brown teenager in a white world, but after a terrorist attack, Maya must face the increased hate and violence against Muslims and the Islamophobia that seems to be rampant in America today.

The anti-Muslim sentiment is nothing new, as Ahmed points out. “Racism, bigotry, and Islamophobia have been a part of the United States as long as there has been a United States," she says. "We’re paying more attention to it now, perhaps, because political leaders have given permission for prejudice to come out into the light, have lauded it, have participated in it." Her goal with Love, Hate, and Other Filters was to capture that moment in time in which Maya’s youth — which should be about exploration and introspection, of learning who she is and what she stands for— is shattered by hate.

This kind of representation is important to Ahmed. “Growing up I never saw South Asians or Muslims represented, really anywhere, unless it was brown face — Peter Sellers, Amy Irving — or later on, mocking stereotypes — Apu.” The true landscape of America features an incredible racial diversity. It’s important that teenagers of all skin colors can see themselves in the books they read and the media they consume. Experiences like this should be universal.

And that’s the key for Ahmed. Love, Hate, and Other Filters is not just a book for Muslim teenagers or for South Asian teenagers. These audiences will surely see themselves in the main character — Ahmed put a little of herself in Maya, after all. She grew up in Batavia, Illinois, as the child of immigrants, and many of Maya’s specific experiences are based on similar events in Ahmed’s. But the resonance of this story isn’t limited to just people who look like Maya.

“I had to juggle the expectations of my parents and my own dreams — I actually think that is something that is quite universal,” Ahmed says. “I believe Maya’s journey is her own, but she’s also a girl like all the girls, one who is trying to figure things out. A girl who wants to forge her own path and who has to decide if she is going to stand back up when she gets knocked down. In that way, I think Maya’s story is mine too; it’s all of ours.”

"I believe Maya’s journey is her own, but she’s also a girl like all the girls, one who is trying to figure things out."

In the end, the universality of Love, Hate, and Other Filters is what makes it so appealing. It’s novels like this that give people of color a place in America. They validate our own experiences, and confirm that our experiences are as American as they come. They are not “other” stories, they are human stories, as Ahmed makes clear. "The breadth of stories of Muslims in America are American stories," she says. "The incredibly diverse stories of Asians in America are American stories. Just like our histories in this country are part of the American grain, so to our stories and our bookshelves should reflect that. It is to our detriment as a nation to ignore those experiences."