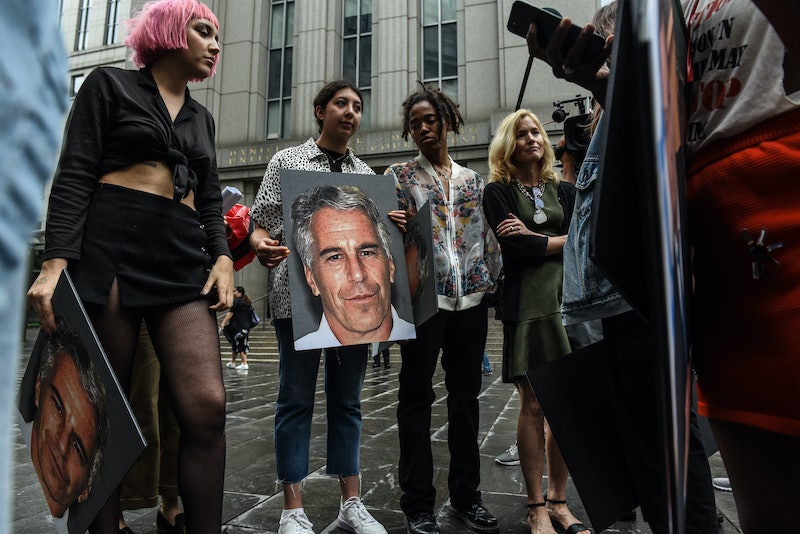 Multimillionaire financier Jeffrey Epstein died of an apparent suicide Saturday in a New York City jail, where he was awaiting trial for allegedly sex trafficking dozens of underage girls. The Justice Department is now investigating his death, but advocates are also urging people to consider what's next for the survivors of Epstein's alleged abuse. An attorney who advocates for survivor's rights tells Bustle they have a few options, even though some of the victims have already said they feel they've been "denied justice" completely.

Federal prosecutors in New York unsealed an indictment against Epstein in July for allegedly sex trafficking girls, some as young as 14, at his homes in multiple states between 2002 and 2005. U.S. Attorney Geoffrey Berman said in a statement Saturday that his office will continue its investigation.

"To those brave young women who have already come forward and to the many others who have yet to do so, let me reiterate that we remain committed to standing for you, and our investigation of the conduct charged in the Indictment — which included a conspiracy count — remains ongoing," Berman's statement read.

Some of the women told Miami Herald reporter Julie Brown, who identified 80 of Epstein's alleged victims during more than two years of reporting, that they were in shock when they learned about his death. Jena-Lisa Jones, who says she was 14 when Epstein molested her, told Brown, “I just can’t believe it. We were finally feeling that we might have some justice after all these years."

“I just wanted him to be held accountable for his actions," victim Michelle Licata told Brown. "I would never wish that somebody would die, but he took the easy way out."

California attorney Shari Karney, president and founder of ROAR as ONE, a nonprofit dedicated to creating "civil rights for survivors who have too long been denied justice and accountability," tells Bustle that there are a few avenues for survivors of Epstein's alleged abuse to seek justice, although she ultimately believes "justice died with Epstein."

She notes that while criminal charges against the financier will go away because there's no longer a defendant, civil cases against his estate announced by lawyers for some of the women will be able to proceed. Epstein's lawyers filed a document last month that listed his total assets at about $559 million, Reuters reported. Those civil suits will seek monetary damages, but the sense of closure they can give survivors will be different, according to Karney.

"These victims are not going to be able to face their accuser in court in a criminal proceeding," she says.

Karney outlines two other legal avenues that could allow victims to get the justice they seek. They could file civil suits against Epstein's alleged co-conspirators, or else federal prosecutors could indict some of those co-conspirators. The problem, she says, is that Epstein "was the center of the spokes" on the wheel or web that connected the alleged co-conspirators to his crimes.

"And when you shut him down, you shut down a lot of the whole wheel," she says, meaning it might be difficult to connect Epstein's co-conspirators to him without information that he could've provided.

Hours before Epstein's death, roughly 2,000 documents from a lawsuit that one of Epstein's alleged victims filed against his then-girlfriend Ghislaine Maxwell were unsealed by a federal judge. Attorney Jack Scarola, who represented some of the survivors, told CBS News that Maxwell was mentioned by a number of them.

"There are multiple victims who claim that Ghislaine Maxwell was a personal participant in recruiting them for Jeffrey Epstein, that she assisted in the scheduling of appointments, multiple victims being delivered to Epstein on a daily basis over an extended period of time," he told CBS News.

Maxwell has denied any wrongdoing, and her whereabouts are reportedly unknown. Even if she could be located, Karney says moving forward with criminal indictments against any alleged co-conspirators could prove difficult or impossible.

In 2008, Epstein pleaded guilty to state charges of procuring a person under 18 for prostitution and felony solicitation of prostitution. The plea was part of a deal included a non-prosecution agreement that granted Epstein amnesty in the Southern District of Florida as long as he met a set of requirements, such as serving a 13-month prison sentence. Scarola told CBS News that deal also allowed Epstein to protect alleged co-conspirators, like Maxwell, from prosecution.

"One of the issues that's going to arise is whether the plea deal that Epstein took — and he got immunity for everyone that was involved — whether that immunity deal is going to hold up and whether the co-conspirators can be criminally charged," Karney says.

Karney says she believes that, ultimately, "justice for these survivors died with Epstein." While she says civil suits for monetary damages are important for the survivors, "being able to face your accuser" in court "provides a different accountability, different justice, and a different healing for survivors and victims."

That's an option that Epstein's alleged victims no longer have.

Additionally, Karney says many of the survivors will not be able to file a civil suit, or if they do file one, they risk dismissal should their claim exceed the statute of limitations in the state where the alleged crime was committed. As a survivor of child sexual abuse herself, Karney is currently working toward federal legislation that would extend the statute of limitations for child victims.

To Karney, the stories of Epstein's alleged victims are representative of a much larger problem with the criminal justice system. "They're the microcosm of every victim who is trying to get justice and who isn't being listened to or heard," she says.

More like this
24 History-Making Black Women You Probably Didn't Learn About In School
By Ayana Lage and JR Thorpe
25 Inspiring Quotes From Black Women To Celebrate Black History Month
By Kyli Rodriguez-Cayro and JR Thorpe
6 Anti-Police Brutality Organizations You Can Support Right Now
By Syeda Khaula Saad and JR Thorpe
Here’s Where The NHS Nurses’ Strike Currently Stands
By Sophie McEvoy
Get Even More From Bustle — Sign Up For The Newsletter
From hair trends to relationship advice, our daily newsletter has everything you need to sound like a person who’s on TikTok, even if you aren’t.