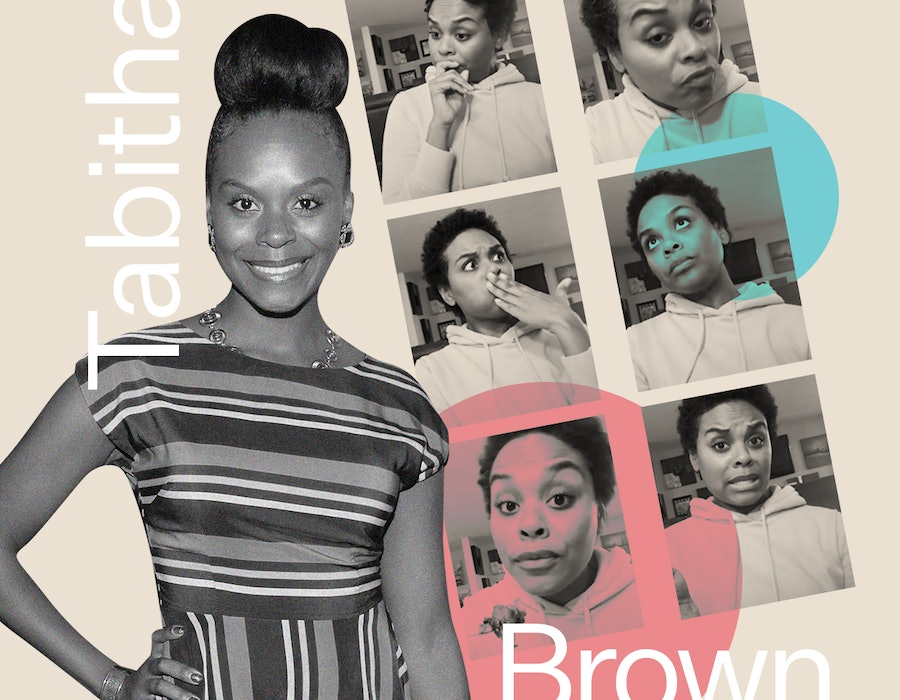 Scroll down your For You page on TikTok, and you’re guaranteed to stumble upon one of actor Tabitha Brown’s videos. The Los Angeles-based mom of two is known for her vegan cooking tutorials and syrupy-sweet missives on self-care, often posted late at night, when she knows people need it the most.

“Food always gets people first, because we need it to survive,” she says on a recent Zoom call with Bustle. “But more than food, we need love.”

Though her videos had been going viral for years on Facebook and Instagram, Brown, 41, joined TikTok in March, after her 18-year-old daughter convinced her she could be "like a mom" to the platform's younger audience. The actor — who’s guest starred on Will & Grace and Switched at Birth, among other shows — has since amassed over 2 million followers on the app. Once her account started picking up steam, Brown started getting comments on her food videos saying, “Your voice is so calming, you made my anxiety go away.” That’s how she knew what she was doing was much bigger than carrot bacon.

“So many people are dealing with anxiety and hopelessness during this time,” she says, referring to the coronavirus pandemic. “That’s why I started doing [affirmation videos], especially at night. A lot of people who are stressed, depressed, or suffer from anxiety, they cannot sleep well.”

Brown has been there. She first went vegan after a long period of illness: In January 2016, she woke up with a headache that just never went away. “It was accompanied by chronic fatigue, chronic pain, anxiety, depression, and so many other things shutting down inside my body, that doctors couldn’t figure out what it was,” she says. “That took me to a really low place. I was trying to pretend I was OK, but inside I felt I was going to die.”

She credits the documentary What the Health for inspiring her transition to veganism in 2017, which began with a 30-day challenge. “Within the first 10 days, my headache went away,” she says. “I continued to get better every day after that. So after the 30-day challenge, I was like, this is my life now.” There was a slight learning curve where she had to figure out how to cook for her newly vegan self and her non-vegan family. “Other than that, honey, it’s been so good,” she says, her signature southern accent coming out full force. “I got my life back.”

Today, she views cooking as a form of sustenance, but also as self-care. “It feels good to cook and be in the kitchen and just play,” Brown says. “That’s why I don’t really cook with recipes. I cook from the spirit.” She advocates for believing in yourself in the kitchen, and following your instincts over following instructions. Need a little bit more salt? Add a little bit more salt. Garlic powder? Same. “We have to learn to trust ourselves and make our own decisions,” she says.

To start trusting yourself as a cook, she recommends a good foundation of ingredients. If Brown has garlic powder, grapeseed oil, mushrooms, spinach, avocados, or other fresh vegetables around, she knows she can throw something delicious together, no problem. “It’s hard for me to have a favorite, because I love food so much,” she says. When pressed, she points to her vegan breakfast scramble as one dish that’s quintessential Tabitha Brown.

The platform that she’s grown on TikTok and other social media, she says, has given her the vehicle to develop her own show, something she’s wanted to do for the past 10 years of her acting career. Brown recently signed with Creative Arts Agency, and is planning to create a TV show about her life. “I always tell people I am Clair Huxtable meets Roseanne, right in the middle,” she says. “So it’ll give you that feel if you can imagine that. America’s mom.”

More like this
Why We Love Investigating Friendship Breakups
By Carolyn Steber
An Expert Weighs In On The Viral Raw Carrot Salad Trend
By Alexis Morillo
How Ovulation Affects Your Sense Of Smell, Libido, & More
By JR Thorpe and Lexi Inks
Ashamed Of Your Screen Time Stats? Here's How To Change That
By Alexis Morillo
Get Even More From Bustle — Sign Up For The Newsletter
From hair trends to relationship advice, our daily newsletter has everything you need to sound like a person who’s on TikTok, even if you aren’t.