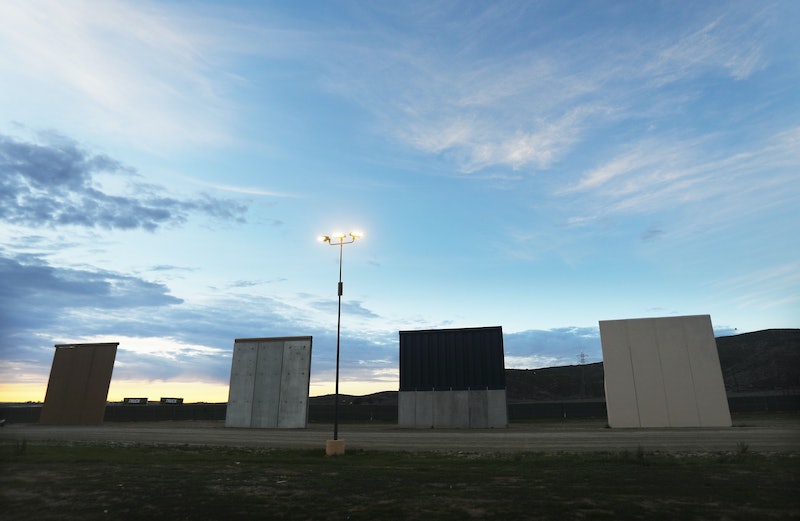 In a speech at a conference of city and county sheriffs in D.C. on Wednesday, Trump might have given a hint about how tall the border wall would be, if he gets his way. Per NBC News, the president confirmed that a border wall is "very, very on it's way," and that the wall will supposedly be harder to climb than Mt. Everest. He also repeated on more than one occasion during the speech that construction on the wall was already underway, though that still isn't the case, per NBC.

During the conference on Wednesday, Trump said,

As we review the new proposal from Congress, I can promise you this: I will never waver from my sacred duty to defend this nation and its people. It’s a wall that people aren’t going through very easy. You’d have to be in extremely good shape to get over this one. They would be able to climb Mt. Everest a lot easier, I think.

Trump also confirmed during his speech that he would find a way to build the wall no matter what amount of funding Congress gave to him, according to NBC, and that the wall is, somehow, already under construction. He said, "It’s happening as we speak. We’re building as we speak in the most desperately needed areas. And it’s a big wall. It’s a strong wall."

There are very few details about the height or width of the planned wall, as of now. However, last October, the section of wall that was completed in California was revealed to be 30 feet high, per The Hill. The wall, which is two-and-a-half miles long, was unveiled by Department of Homeland Security Secretary Kirstjen Nielsen, who said at the ceremony, via The Hill, "Looking at this, I would not attempt to climb it. ... This is the wall system we are requesting Congress to fund."

To be clear, even if the Trump administration did eventually manage to build this wall all along the border, it would be nowhere near as difficult to climb as Mt. Everest, which is approximately 29,000 feet high.

What's more, the most recent border security deal, which was agreed upon by members of both parties on Monday evening, does not agree to anything close to a 30-foot steel or concrete wall. Rather, it offers $1.375 billion for 55 miles in fencing along the border with Mexico, per The New York Times. The deal does not mention how high the fencing would be, but it's difficult to imagine a fence harder to climb than Mt. Everest.

If Trump doesn't agree to the new deal, the government could return to a partial shutdown mode on Friday. To reporters on Wednesday, POTUS recognized the looming deadline and confirmed to reporters that he didn't "want to see a shutdown," per The New York Times. Trump added that "a shutdown would be a terrible thing," and then he also alluded to other plans he appears to have for border wall funding, should he sign this deal.

Per the publication, Trump said he had "options most people don't understand," when it comes to finding funding for the wall.