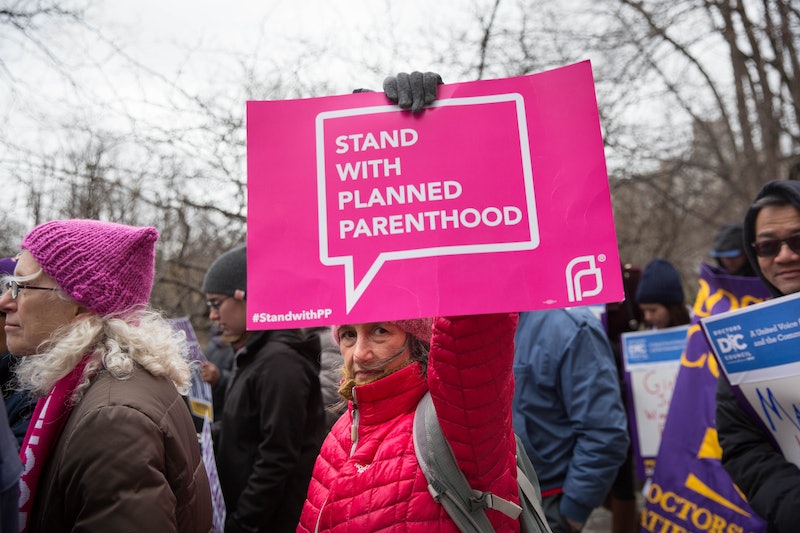 As the House of Representatives votes on the latest iteration of the Affordable Care Act (ACA) repeal and replace, known as the American Health Care Act (AHCA), it's important to understand the effect that the potential new health care bill would have on Americans. For a long time, the GOP has called for a defunding of Planned Parenthood and stood against the organization that provides essential health care to low-income women across the nation. So, how will the AHCA affect Planned Parenthood's funding? UPDATE: The AHCA has officially passed the House with a majority of votes, 217 to 213.

The Republican mission to defund the women's health organization is alive and well in the newest version of Trumpcare. Just like the original proposition, the new version would gut federal funding of the organization.

It's important to remember that because of the Hyde Amendment, Planned Parenthood cannot use its federal money toward providing abortions. So, the money that they're getting is going toward essential, life-saving health care services like STD testing, cancer screenings, and birth control.

Besides federal funding, Planned Parenthood also receives money through donations. In fact, Planned Parenthood reportedly saw a spike in donations following President Donald Trump's election victory — about 80,000 donations in three days. While donations from the public definitely help, they aren't a constant reliable stream of support for an organization that serves women daily.

If the organization were forced to rely on donations alone, its ability to operate normally would certainly be threatened. Although Planned Parenthood's federal funding makes up less than half of their annual budget, it would still put a lot of pressure on the organization should that be taken away.

While the AHCA may not totally destroy Planned Parenthood, it's certainly a blow for the organization that each year gives millions of women — and men — safe and legal health care. Republicans may be dead set on defunding it, but it's up to Americans to talk to their representatives to let them know that they do not support the defunding of Planned Parenthood and urge them to vote against the AHCA.

More like this
5 Ways To Stand In Solidarity With Women In America From The UK
By Sophie McEvoy
How To Fight For Reproductive Rights, Based On How Much Time You Have
By Courtney Young
The UK Abortion Laws In 2022, Explained
By Sophie McEvoy
Demi Lovato, Jessica Chastain & More Stars Celebrated The 4th Of July By Protesting
By Jake Viswanath
Get Even More From Bustle — Sign Up For The Newsletter