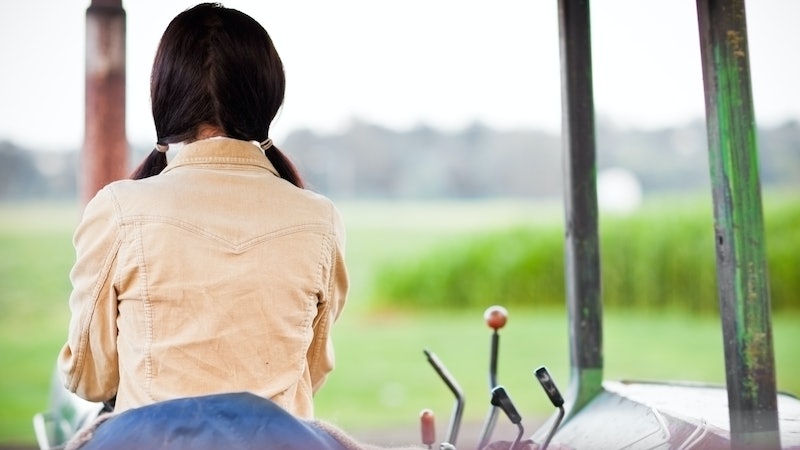 In this op-ed, science journalist Stephenie Livingston explores what's missing from the discussions about women and climate change. Bustle’s “What’s Missing” is a column that gives space to important insights being left out of the conversation around the most talked-about news of the day. This column is part of Covering Climate Now, a global collaboration of more than 250 news outlets to strengthen coverage of the climate story.

I grew up feeling silenced and misunderstood in the rural wilds of the “weird state” of Florida, better known for its strange headlines than the fields of corn and tree-covered dirt roads where I ran barefoot as a kid. Much like my home state, the realities of rural life in America are too often shrouded by stereotypes, and the biases people have against the places rural women inhabit threaten to render our climate change-induced plight invisible.

Florida is on the front lines of the climate change crisis, and the women who live here and others like them are disproportionately affected by this ever-growing threat: 80% of people displaced by climate change are women, according to the United Nations. Hurricane Michael, which ravaged a mostly rural area of the Florida Panhandle — and my own family’s homes nearby — in October 2018 is being called the “forgotten storm” because Congress delayed federal disaster relief, donations to national charities supporting storm victims were far less than for other storms, and people are still struggling to rebuild today.

In the past year alone, people who live in rural areas faced torrential flooding in the Midwest, worsening drought and forest fires in Appalachia, and stronger hurricanes in the South. Amid these disasters, women in rural areas also face gaps in higher education and substandard health care. Yet in the face of these and other major roadblocks, there are more women farmers in the United States than ever before. Women serve a vital role in combating climate change in rural places, as they have a deep connection to the land and a unique perspective on the ways the climate is changing.

So why are the voices of these women often left out of the discussions around both how to solve the climate crisis and how to support those in the middle of it?

None of the women running for the Democratic presidential nomination are from rural areas — despite campaigning on rural issues, Sen. Amy Klobuchar grew up outside of Minneapolis. And articles about climate change written by rural women are a rare sight in national news outlets. Journalists don’t often go to rural areas, even when writing about them, and when they do, they swoop in and leave with a story told from an outside perspective, one susceptible to misrepresentations and stereotypes.

We need women who understand the truth of rural life talking about the problems there.

Last year, Appalachian researcher Rachel Garringer wrote a detailed account of “offensive and destructive coverage of my home and the rural South,” noting that there are varied experiences and diversity in the area beyond the depictions of Appalachia “as the home of racist white voters, as a place of despair and conservatism, as a wasteland of drug epidemics and pollution.” Documentary filmmaker Sally Rubin also explored in her film how inaccurate depictions cause people in places like Coal Country to be viewed as not of value, contributing to a lack of concern for the environmental plights there.

Stereotypes that paint rural women as backward and ignorant lead to roadblocks that then make it even harder for them to be heard. Much of the world gets to know rural America through films, books, and television, like the Netflix prison drama, Orange Is the New Black. For a show that made many women feel seen, I didn’t see myself in the character Pennsatucky, an inmate from Appalachia with a substance use disorder and bad teeth who's portrayed as a hypocrite for being an evangelical Christian who lived an amoral lifestyle.

We need women who truly understand rural life talking about the problems climate change causes and the solutions, too. Those solutions include consuming less, using what we have more efficiently, and living closer to work, which are ways of life rural people know better than anyone.

Women journalists outside of the mainstream are working against ingrained biases to bridge the divide between rural people and the climate change discussion. They’re doing this work in publications like Southerly and The Marjorie, an award-winning Florida publication that’s reclaiming #FloridaWoman, an online joke that’s often aimed at the state’s rural poor. I myself have reported on and written about environmental topics in rural areas as well as climate research in academic settings, and I always try to highlight the voices of women.

But I still remember the college professor who described my nearby rural hometown as “third world,” and the scientist who thought I was too ignorant to report his research findings after hearing my Southern accent. The longer these misunderstandings and judgments persist, the more they diminish our voices.

Our voices can speak solutions into being. Our voices are both vulnerable and strong. Our voices can reach beyond small towns and farms. It’s time to break down the stereotypes and bring women from rural areas into the mainstream conversation, because if we don’t, we risk silencing the perspectives of more than 19 million potential warriors in the climate crisis.