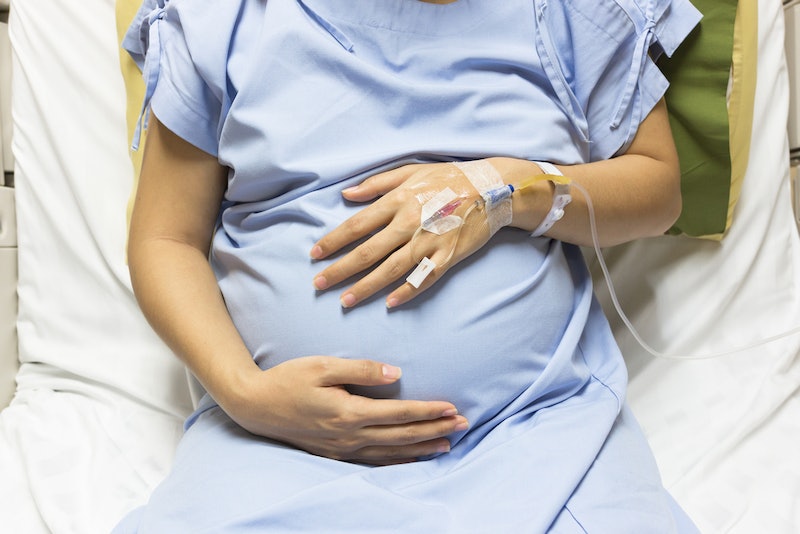 In this op-ed, Jesse Pournaras, a birth and postpartum doula, explains how her experience with her clients has informed the way she views the fetal personhood movement and the criminalization of pregnancy in America.

Fetal personhood laws, which grant fetuses and embryos full legal protections, mean that more often than not, the rights of the fetus take precedence over the rights of the pregnant person. As a doula, I see this play out in the labor and delivery room constantly. Doctors and nurses tell my clients, “Your baby is our first priority — your plans come second. We will do whatever it takes to get this baby born healthy.”

When pregnant people hire me as their doula, one of the things they often express to me is that they want an advocate in the hospital. In our prenatal meetings, clients tell me they’re afraid hospital staff will bully them into making decisions they wouldn’t have otherwise.

In one of the first births I ever attended as a doula, a frustrated nurse yelled at my client, “You are killing your baby!” when my client begged not to be taken for a cesarean section. She had planned a home birth but transferred to the hospital, and felt she had no choice. The nurse had made it clear: to refuse a cesarean section was to endanger the baby.

Recently, I had a client refuse antibiotic treatment during labor for a suspected infection because she had severe allergic reactions to many antibiotics in the past. The hospital tried to coerce her to consent to treatment, then ultimately called Child Protective Services, claiming her refusal to take antibiotics endangered the health of her baby. Despite the fact that my client was at risk for anaphylaxis, a potentially fatal allergic reaction, the hospital prioritized the baby’s health and tried to punish the mother.

Even though I practice in New York City, where there are no fetal personhood laws on the books, I have seen how the health of the fetus are prioritized to the detriment of my clients. Child endangerment and neglect laws have been used in the same way. My role as a doula is to remind my clients of what their rights are and how they can exercise them in pregnancy and labor. If pregnant people fear they will be charged with a crime for making a decision that might impact their pregnancy, they lose the ability to provide consent and maintain their bodily autonomy.

In June, Marshae Jones was charged with manslaughter for the death of her fetus. A grand jury agreed that Jones had instigated a fight that ended in with another individual shooting her in the stomach, causing her to lose her pregnancy. The charges ultimately were dropped amid national outrage. But while Jones’ case is the latest case to gain viral attention, it is certainly not the first.

Every act that could impact the development of a pregnancy can be considered criminal.

In 2008, Jennifer Jorgensen was in a car accident when she was eight months pregnant. Her baby was delivered via emergency cesarean and died a few days later. A New York jury found Jorgensen guilty of manslaughter because she had not been wearing a seat belt (the state Supreme Court overturned that conviction in 2015). In 2011, Bei Bei Shuai was charged with murder in Indiana after surviving an attempted suicide at eight months pregnant.

These cases are a direct result of initiatives by the anti-abortion movement to push the beginning of “personhood” closer and closer to conception. Clearly, prosecutors and police in Jones’ case saw it as their duty to punish a woman for acting in a way they considered “unbecoming” of a mother. To them, pregnant bodies act as hosts, and as hosts, they are required to adhere to a strict morality code and provide a hospitable environment in which a fetus can successfully gestate.

This idea is furthered through legislation as well. At least 38 states have fetal homicide laws on the books. And from seemingly benign legislation that issues birth certificates to stillborn babies, to much more complicated laws allowing prosecutors to treat fetuses as victims of crime, “personhood” laws have allowed for a meticulous chipping away at Roe v. Wade and pushed us closer and closer to giving fetuses the same rights as the people carrying them.

I see the effects of the push for fetal personhood regularly. My home birth clients are afraid of how they will be treated in the hospital should they need to transfer, knowing that many doctors consider home birth reckless. Many of my clients reluctantly agree to procedures they wanted to avoid, solely because their doctors insist those procedures are in the baby’s best interest. My clients ignore their own wishes — and their own bodies’ needs — when they’re told that to do otherwise is to be a “bad” parent.

When we treat embryos and fetuses as citizens with full rights, every miscarriage, every termination, every act that could impact the development of a pregnancy can be considered criminal. That makes pregnant people fearful. If a person is experiencing a medical emergency like a miscarriage or premature labor, they may neglect to seek medical treatment if they’re afraid they may be held liable if they lose the fetus. No pregnant person should be put in that position.

We must stop the anti-abortion movement’s efforts and insist legislators roll back fetal personhood laws throughout the country, and ensure a pregnant persons right to maintain bodily autonomy and provide informed consent. If we don't, I fear we will lose mothers and pregnant people at an alarming rate to incarceration, disability, and death.

More like this
Here’s Where The NHS Nurses’ Strike Currently Stands
By Sophie McEvoy
The 4 Best Lip Balms To Prevent Cold Sores, According To A Dermatologist
By Maria Cassano
The 9 Best Exercises For Improving Coordination
By Carolyn Steber
All The Surprising Benefits Of Having Strong Glutes
By Carolyn Steber
Get Even More From Bustle — Sign Up For The Newsletter
From hair trends to relationship advice, our daily newsletter has everything you need to sound like a person who’s on TikTok, even if you aren’t.