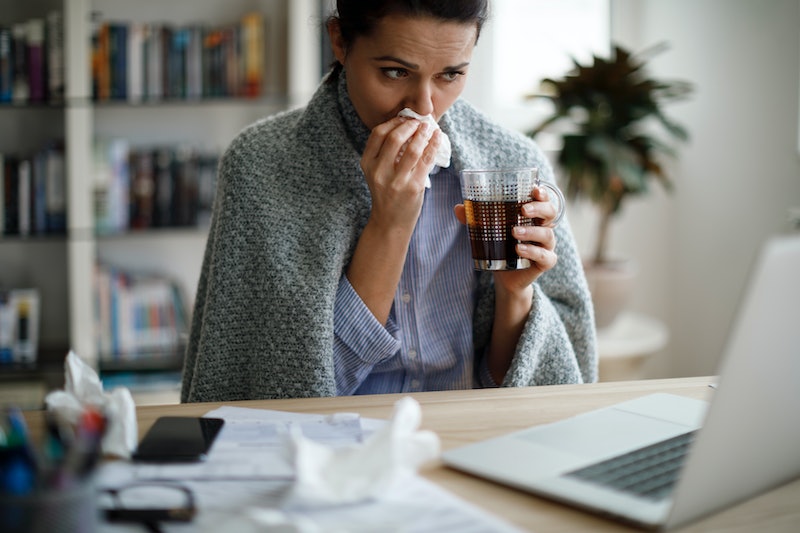 During the yearly flu season, getting sick and spending a week in bed is at the bottom of anyone's to-do list. (Fortunately, you can lower the chances of this happening by getting a flu shot.) If you do get sick, you can expect the illness to affect your sleep, your respiratory system, and your temperature, but the flu may have an unexpected effect on another aspect of your health — your menstrual cycle — as a by-product of the way the flu affects your body.

It's important to know that there isn't any direct interaction between the influenza virus and the menstrual cycle. "There’s no specific data on the impact specifically of the flu on the menstrual cycle, but in general, the menstrual cycle is sensitive to nutritional status and one’s circadian rhythm," Dr. Felice Gersh, M.D., an OB/GYN, founder and director of the Integrative Medical Group of Irvine, and author of PCOS SOS, tells Bustle.

The virus itself affects the respiratory system, which is only involved indirectly with your period. A study in American Journal of Respiratory and Critical Care Medicine in 2012 found that respiratory function in your lungs can change over the course of a menstrual cycle, and that it tends to be worse in the weeks before and during your period. This suggests that hormones are somehow involved in respiration when you're not sick. However, there hasn't been any research on how flu might affect periods or menstruation, or vice versa.

The biggest way in which the flu could affect your period, experts tell Bustle, is through its symptoms, like poor sleep. "If somebody is ill and doesn’t eat much, or eats at unusual times of the day or night, the menstrual cycle can be disturbed," Dr. Gersh tells Bustle. Flu, she says, can also make you feel less like sleeping, or make you sleep at odd times. Both these food and sleep patterns can affect your menstrual cycle.

A person with flu might send signals to their body that they're not capable of having a successful pregnancy right now, which would then delay ovulation and menstruation. "The body has sensors to detect when a woman is sleep- or nutrient-deprived and will likely reduce fertility, which will alter the menstrual cycle," Dr. Gersh says. Our bodies have an inbuilt mechanism to signal that when you're not well enough to reproduce, Dr. Mia Di Julio M.D., an OB/GYN at Providence Saint John's Health Center, tells Bustle. "When the body is under stress, such as during a severe infection, the hormone cortisol is released," she says. "High levels of cortisol suppress normal levels of reproductive hormones, potentially leading to abnormal ovulation and delayed menses.” If you're totally flattened by the flu and your period turns up later or at an unexpected time, it's a possible sign that your body has determined you're not ready for a baby right now and adjusted its rhythms accordingly.

The flu may make certain aspects of your period worse; it can make you more dehydrated, which is a risk during periods in general. So if you have your period and the flu simultaneously, drinking water is a must. Some people also experience poor sleep during their periods, and as flu-induced sleeplessness is also common, that can add up to a lot of sleep deprivation.

If you experience heavy periods and are being tested for anemia, or low levels of iron in your blood, it's a good idea to wait until you've recovered fully from the flu — and not just to avoid infecting everybody in the doctor's office. Anemia tests measure how much ferritin, a protein that transports iron, is in your blood. A small study of 66 women in 2002 in Scandinavian Journal Of Primary Healthcare found that if they'd had an illness like the flu in the past month, their levels of ferritin, were surprisingly high, and couldn't produce reliable results.

Dr. Gersh says it's important to realize that not everybody with the flu will experience a slowdown or disruption in their cycle, particularly if their experience with the virus is pretty mild. "Even if a woman gets the flu, she needs contraceptive protection," she tells Bustle. Your period, as far as science knows, also won't make your flu worse — but it definitely won't make the experience more pleasant, so it's worth remembering to get your flu shot every year. And if your period hasn't shown up on time, it's still wise to take precautions and test for pregnancy if it's a possibility.

Dr. Felice Gersh, M.D., OB/GYN, founder and director of the Integrative Medical Group of Irvine, and author of PCOS SOS

More like this
The 11 Benefits Of Aerial Yoga, According To Trainers
By Carolyn Steber
Ashamed Of Your Screen Time Stats? Here's How To Change That
By Alexis Morillo
Kourtney Kardashian’s Wellness Guru Shares Her #1 Tip For Better Health
By Taylor Jean Stephan
10 Primal Movement Exercises That'll Improve Your Mobility
By Carolyn Steber
Get Even More From Bustle — Sign Up For The Newsletter
From hair trends to relationship advice, our daily newsletter has everything you need to sound like a person who’s on TikTok, even if you aren’t.