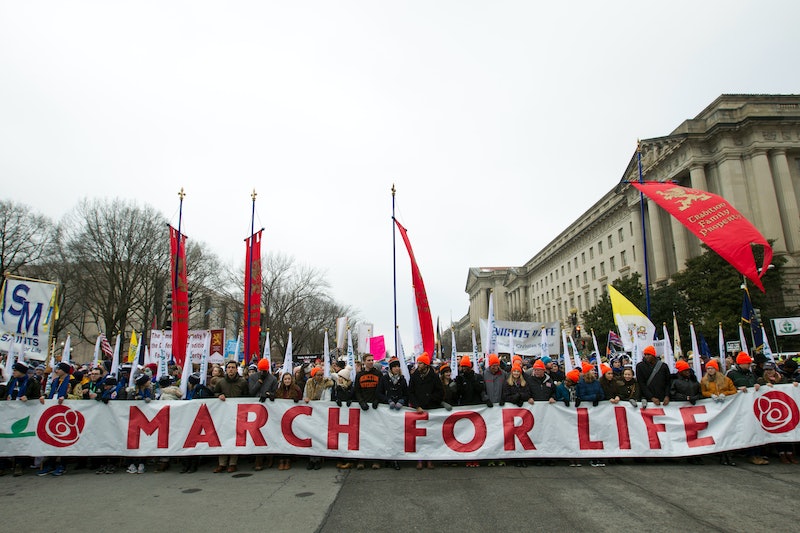 Since Donald Trump became president, elected Republicans across the country have grown emboldened in their efforts to restrict abortion. But you may not realize how the GOP became anti-abortion in the first place. In just a few years after Roe v. Wade secured abortion as a constitutional right in 1973, the party shifted dramatically toward opposing abortion, per The Washington Post, alienating many party members who had supported abortion rights.

This shift in the GOP's position on abortion policy was part of an effort to revive the party in the years after Roe was decided, according to Karissa Haugeberg, an assistant professor of history at Tulane University.

"During the 1970s, a faction within the GOP sought to re-energize the Republican Party by courting religiously conservative evangelical Christians, many of whom were deeply uncomfortable with the sexual revolution and civil rights movement," Haugeberg tells Bustle via email. "These Republican strategists developed the GOP’s anti-abortion plank (the Democratic Party later followed suit with a platform that affirmed a woman’s right to abortion)."

The majority of Republicans were supporters of abortion rights through the 1960s and 1970s, according to the Journal of Policy History. The first woman to lead the Republican National Committee, Mary Louise Smith, was known for supporting abortion rights, per The New York Times, while former first lady Betty Ford described Roe v. Wade as a "great, great decision." Even former Republican Sen. Barry Goldwater, a well-known conservative, supported abortion in certain cases.

According to The Washington Post, 1976 marked the first time that the word "abortion" appeared in a Republican Party platform, acknowledging the debate within the party over abortion rights. By 1980, the party had pledged to adopt an anti-abortion constitutional amendment, according to the Post.

Haugeberg says that as a result, abortion became something of a litmus test for Republican candidates in subsequent years, driving away many Republicans who'd supported abortion rights over the next few decades.

In her book Republican Women, Catherine E. Rymph noted that many Republican women spent years pushing back against their party's newly-adopted anti-abortion stance. Smith, the former head of the RNC, actively spoke out for civil rights for the rest of her life, and denounced the GOP's decision to align itself with the religious right, Rymph wrote.

But their efforts did not seem to make a difference, and anti-abortion sentiment in the GOP only grew more pervasive with time. Fast forward to today: In the two years that Trump has been president, his administration found several ways to roll back abortion rights.

When he first took office, Trump reinstated and expanded a global gag rule that stripped American funds from international organizations that offer or promote abortion services. Trump has also filled his administration with conservatives who've taken a hard-line stance against abortion, and supported Republicans' efforts to defund Planned Parenthood. He nominated Brett Kavanaugh to the Supreme Court, who was perceived as a threat to Roe by numerous reproductive rights advocates, and also became the first sitting president in history to address the anti-abortion March for Life last year (he did so again on Friday).

Like other prominent Republicans, Trump wasn't always publicly opposed to abortion. In 1999, he told NBC News that while he personally hated "the concept of abortion," he nonetheless identified as "pro-choice." Other previous Republican presidents, from Ronald Reagan to George H.W. Bush, reportedly supported abortion rights at one point in their political careers, too.

While though roughly 34 percent of Republicans say they're "pro-choice," according to FiveThirtyEight, their view is not shared by most of the Republicans who currently represent them in Congress. Only Sens. Susan Collins of Maine and Lisa Murkowski of Alaska are known to break with their party on the issue.

It was a sign of the times, then, when the Republican Majority for Choice, an organization founded in 1988 by Mary Dent Crisp, a former co-chairwoman of the RNC, closed its doors for good last summer. The group had fought for emergency contraception, effective family planning policies, and stem cell research.

The organization's leaders, Susan Bevan and Susan Cullman, urged the GOP's fiscal conservatives to support those policies in a New York Times op-ed, arguing that "it is fiscally disingenuous to deny birth control coverage and then bemoan unintended pregnancies and abortion." They wrote that ultimately, they could no longer support a party that restricted reproductive health care access and the economic choices of pregnant people.

"As pro-choice Republicans, we refuse to support a party that has rightly earned the labels anti-woman and anti-common sense," they wrote, adding, "The big tent has collapsed for good."