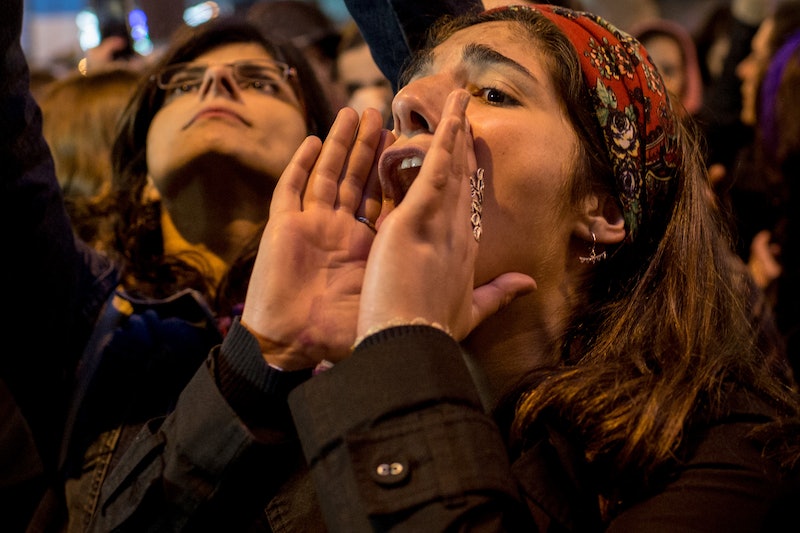 One aspect consistent in Donald Trump's health care bill, the American Health Care Act — which was passed by the House Thursday afternoon — is its blatant disregard for women. This much is obvious by seeing how the AHCA's "preexisting conditions" list hurts women much more than men. Among the 24 million people who will be undoubtedly affected by the Affordable Care Act repeal, the predominant demographic will be people from lower-income backgrounds, racial minorities and the LGBTQ, and — as it's becoming clearer — women, particularly sexual assault survivors.

It's worth remembering that before the Affordable Care Act, women who had experienced sexual assault and requested medical assistance could face the harrowing ordeal of being denied health insurance coverage. The reason for this utterly inhumane rejection was that insurers deemed sexual assault a "preexisting condition."

The need to mention this terrifying reality from 2010 is to provide historical context for health care in America, and how it often relegates women to the shadows. The supposedly "reformed" American Health Care Act is no different. Under this act, health insurers will be more emboldened to deny coverage for those with "preexisting conditions."

Thanks to an amendment to the bill from New Jersey Rep. Tom MacArthur and North Carolina Rep. Mark Meadows, people will witness a repetition of the same problem from yesteryear: turning vulnerable Americans, in desperate need of medical attention, away.

Most disturbing is how Trumpcare is expected to carry a chilling effect on women under the list of "preexisting conditions" which include conditions women tend to experience much more than men.

The American Health Care Act allows states to waive Obamacare's requirement that essential health benefits be taken care of by health insurers, like mammograms and vaccinations. This also included mental, behavioral, physical, and substance abuse health services — which are extremely critical for sexual assault survivors, who need them in order to address the range of trauma they have experienced. Without such coverage, these survivors are exposed to a market that is more concerned with a woman's financial standing than her fundamental right to heal.

2. Pregnancy Could Become A "Preexisting Condition"

If a state decides to consider maternity in the list of "preexisting conditions," women will be devastated. Higher premiums could be charged and that will disproportionately hurt women, especially from lower-income backgrounds. Again, the average woman remains in the crosshairs of the American Health Care Act.

The National Association of Anorexia Nervosa and Associated Disorders reports about the prevalence of eating disorders in the United States. Women and young girls grappling with body image issues and eating disorders will be entirely exposed to the whim of insurers who will be free to treat their medical needs and mental health as "preexisting conditions."

4. Lupus Could Become A "Preexisting Condition"

Lupus, a chronic autoimmune disease wherein one's immune system attacks itself, is more common among women than men. Under the American Health Care Act, this disease, which chips away at an individual's body and causes them to suffer lethargy and swollen joints, will become a "preexisting condition."

5. Depression Could Become A "Preexisting Condition"

Depression is twice as common in women than it is in men, according to the Mayo Clinic. Instead of providing mental health coverage for women in need, the American Health Care Act leaves women with depression on the periphery of society, potentially worsening their health.

The National Foundation for Celiac Awareness shows that the disease is more prevalent among women than men: 60 to 70 percent of those diagnosed with the negative immune reaction to gluten are women.

For years, the health care industry has been a source of alienation and misery for many women. A health care bill would ideally address those issues, giving women an equal chance at being healthy and secure to that of their male peers. But the American Health Care Act simply fails to do that.

By turning its back on women with the aforementioned health issues, it shows where its true priorities lie: profiteering off citizens' vulnerability and telling women that being a woman is a preexisting condition.