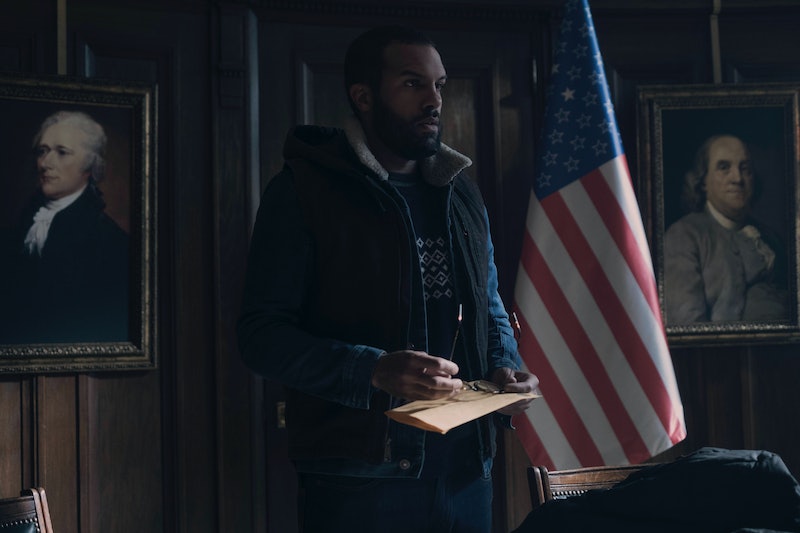 Since Donald Trump took office in January, many concerns have been raised about his petulant and unpredictable approach to governing. He regularly spouts unsubstantiated and fast-disproven “alternative” facts; frames his critics as failing, dishonest, and pathetic; and casts unfavorable but otherwise credible, corroborated reporting as "fake news." Such a platform has bred mistrust in essential democratic institutions like the courts and media, leading to headlines rife with fears of an imminent autocracy.

Some have turned to an unlikely source as a lens for the dangers of inaction against these perceived threats: The Handmaid's Tale, Hulu's prescient and masterful adaptation of Margaret Atwood's 1985 novel. There, in the oppressive, authoritarian regime of Gilead, dissent is not only taboo, it's a death sentence. The show's seventh episode, "The Other Side," is particularly resonant, recounting how protagonist Offred and her family — once legal citizens — attempted to smuggle themselves out of the country before Gilead's final coup. They hide in the trunk of a car, camp out in a desolate winter cabin, and then race frantically into the woods when they're discovered. Their daughter is abducted, and Offred and her husband, Luke, are ripped apart.

Later, in an especially gutting scene, Luke is about to head back into the throes of war to find June and their child, when one of his newfound companions escorts him to a church. Inside, hung bodies are strung up from the rafters en masse — a gruesome warning sign for those who may dare to stand their ground. "There's one of these in every town," says Luke's friend. "This is what they do to people who fight back."

Let's be clear: America is far off from such ruthless totalitarianism, though it does exist in other corners of the world. But Gilead usually keeps its brutalities behind closed doors, opting for surface-level diplomacy in lieu of outright tyranny. And in many ways, that's far more frightening.

What Trump's leadership has done is dredge up the long-brewing fear of potential illiberalism, a democracy in which governments may be elected in free and fair elections and yet routinely violate their citizens’ basic rights. But while Trump is certainly a harbinger for the fear of this concept taking hold, its roots are far deeper than his brief incumbency.

As Dr. Brian Klaas writes for Quartz, The West — with America at the helm— has for decades praised democracy in public while forging deals with abusive autocracies, falling back on the perception that they're key strategic allies. In the process, we've implicitly empowered such despotic regimes while inhibiting democracy: In the last 11 years, 109 countries have seen a net decline in their level of democracy, according to independent watchdog organization Freedom House.

What's changed, Klaas says, is that the United States has long served as a watchdog on the global stage, blowing the whistle on the most egregious violations of justice and human decency. But Trump's actions suggest he's more interested in "making America great again" than upholding democratic vigilance. Instead, that responsibility now falls on us — the American people, not the government. And if we can take anything away from Handmaid's Tale, it's to fight while we still can.