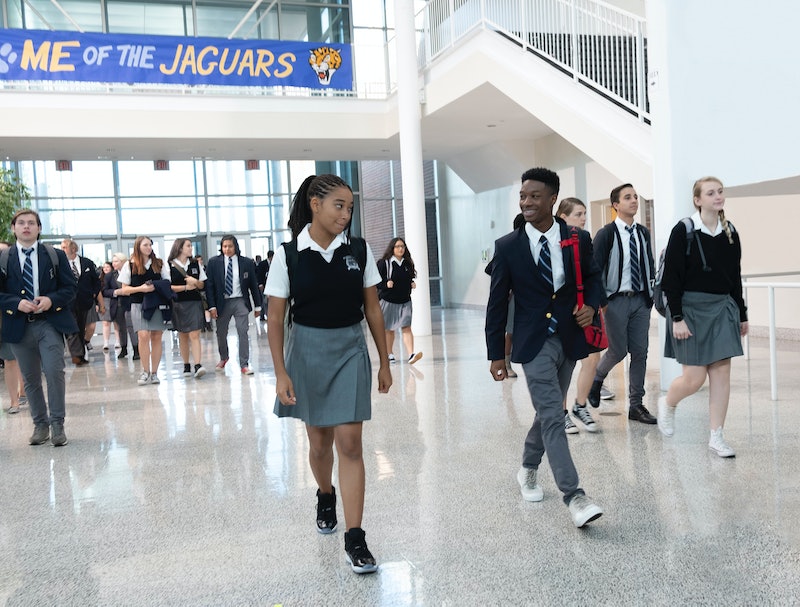 There's a moment in the opening of The Hate U Give when Starr Carter (Amandla Stenberg) walks into her expensive private school. The audience is introduced to her two friends, Hailey (Sabrina Carpenter) and Maya (Megan Lawless), and to a different Starr. In stark contrast to the way she is around her family and neighbors, she is much smaller during school. Nikes laced like security blankets around her feet, hair tied back tight, Starr is guarded, choosing her words and actions carefully. In school, she is always being judged. When Hailey begins to prod Starr about what might be bothering her, Starr closes up and shrugs it off, suppressing herself so as not to offend or bring attention to herself. Starr isn't even able to kiss her boyfriend (K.J. Apa) without first looking for a hiding space.

Starr is doing what many POC, LGBTQ+, and immigrant peoples have to do to survive. Code-switching is the practice of adjusting one's behavior, language, and style to fit in with the dominant group. As I watched Starr navigate her two worlds, I had three very distinct panic attacks. Seeing the shadows of my past reflected on a 100-inch screen shook me. And I didn't even experience the worst of what Starr went through.

I grew up in Ottawa, Illinois — a town of fewer than 20 thousand people that rests where the Illinois and Fox Rivers meet. In the fall, the entire town becomes this gold and red paradise, as hundred-year-old trees shed their leaves. Eagles come in the winter, and baseball is a requirement in the summer. To complete the Mayberry metaphor, all minorities made up less than one percent of the population. When I arrived at school, I learned I was the first Black face that students, parents, and even some teachers had ever seen in person.

After my first day, my mother picked me up from school. There was a look in her eyes that worried me. She asked me about my day. I rattled off the books we read and the friends I'd made. She paused and asked me if I ever distinguished individuals by race. I shrugged. I was told that everyone was the same, and I believed everything that I was told. So no, skin color wasn't a factor.

Except, now it was. Because something about our dark skin and all the white skin surrounding us was setting my mother on edge. Before school started, parents stood in small groups outside of the gated playground. A young boy named Gustav instantly clicked with my brother, Justin. They were running around playing tag when a shrill, anxious voice brought Gustav to a halt. His mother called him away from my brother. In loud, no uncertain tones, she instructed her five-year-old to stay away from the little Black boy.

"The Hate U Give Little Infants F*cks Everybody." Thug life isn't just a mantra, it's an acronym. Starr's baby brother's name, Sekani, means joy. Throughout The Hate U Give Sekani (T.J. Wright) bares witness to police brutality, gang violence, and prejudice. At the film's climax — my final panic attack — Sekani almost makes a fatal decision. Joy is nearly snuffed out of existence. It reminded me that a bit of my brother's joy, his youthful naivety was stolen that day.

My mother also went to a predominately white school. Having grown up in a similar situation, she gave us two pieces of advice: First, don't let anybody hurt you. Defend yourself if it comes to that. Second, pick your battles wisely. If you can walk away and keep your head up, do it.

As I rose through the school system, my Haileys were all around. Unlike Starr, I couldn't hide my home life from white friends, nor could I hide my white friends from my Black parents. Most of those friendships would dissolve within a year. If kids referred to my father as "scary," I knew instantly that there was prejudice in their hearts. If kids were bereft of manners, my mother forbade me to see them again. Disrespect to the home meant there was no true value in the individual.

Starr's father taught her the rules, not just about how to deal with the police, but how to make sure she respected herself. When Starr jumped in Hailey's face, my heart flew. I never had the courage to take down any of my Haileys. To me, their racism was ignorance, and to try and teach them any differently was too exhausting. I didn't have all the words yet to define microaggressions, or systemic poverty, or redlining.

I broke once. During AP History, I was showing the most gruesome images of slavery I could find. Scarred backs, chipped teeth, and men chained to the ceiling were projected onto the wall. My AP History class laughed. After years of me having to explain what slavery was. After years of being the only Black student in class, assuring my classmates that no one who owns a person could be kind. I was exhausted.

Just as Starr reads Hailey the riot act for fixating on the police officer's trauma instead of the dead teenager, I leaned into my classmates. "Is it funny?" I asked. I fixed my glare on each student, my anger finally palpable. They were ashamed. It was etched in their downturned eyes. But I knew they'd be saying the n-word when I was out of earshot. Perhaps their smiles reappeared as soon as I turned my back.

Racism is rarely overt. In fact, I only had one interaction that made me fear for my life. I was crossing the bridge to a friend's house. A blue sky overlooked the converging muddy rivers. An engine roared behind me. Someone was picking up speed. A novelty horn blared "Dixieland." A streak of red, a Ford F-150 draped in Confederate flags, soared past me. I was alone on the bridge. I've heard that there was a noose in the back of that truck. I didn't see it that day. But walked the rest of the way clutching my thick history book over my heart, so if he came back and shot me, the bullet wouldn't pierce my heart.

Like Starr, I failed to shield my brother from the pain of racists. But Starr decides to do something about it. She speaks up for her friend, she protests, and she makes her home a safe haven. I chose not to fight. I fled for the safety of Chicago, and Justin followed a year later. It was the best decision either of us could have made.

In Chicago, I learned that I had developed prejudice and was ignorant of many cultures. Freshman year, I wished a Jewish classmate a happy Easter. Curious about the Muslim faith, I asked all kinds of questions of a classmate, adding emotional labor that could have been done by Google. Through trial and error, I learned to listen and participate when invited.

When I look back on my childhood, I am grateful. It was a tough road. I spent most of my youth wrapped up in a fantasy. I lived in my head, I wrote stories, I watched thousands of hours of film and TV. My room was a small library. But now, I get to make a living using that same internal headspace. Being different helped define who I am and gave me a wealth of empathy for my fellow man. And if the hate I received could give me all of that, imagine what I can give to the world.

More like this
Emma Corrin Spoke Out Against “Clickbait” Headlines Surrounding Gender Conversations
By El Hunt
Jodie Turner-Smith & Joshua Jackson's Relationship Timeline Includes Her Proposing
By Jake Viswanath
J.Lo Wants To Make A Sequel To This Movie With Ben Affleck
By Jake Viswanath
Sarah Michelle Gellar & Freddie Prinze Jr’s First Date Was Unexpected
By Maxine Harrison
Get Even More From Bustle — Sign Up For The Newsletter