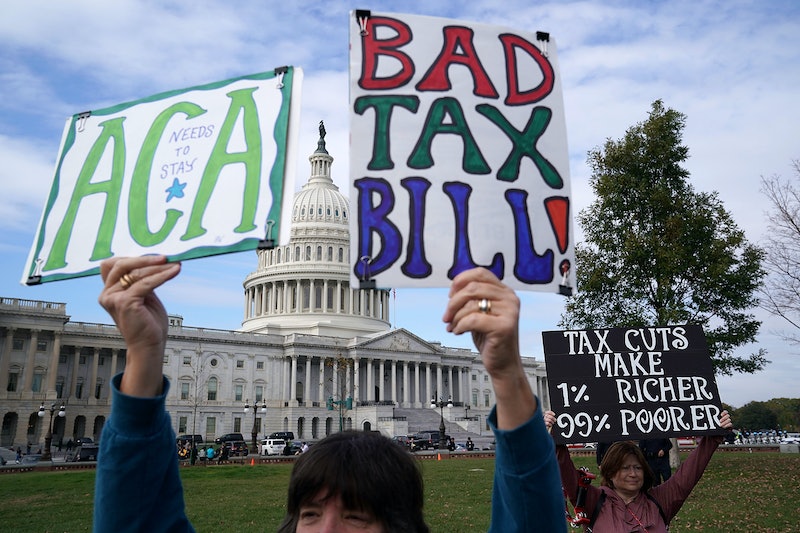 Teachers are often left in the lurch when it comes to school supplies, especially in underfunded districts. They use their own money to go buy everything from magic markers to pencils and paper. And while that can eat into their income, the current tax code acknowledges the reality with a $250 educator expense tax deduction for teachers. But the GOP's new House tax plan would cost teachers — literally.

The Republicans in both the House and Senate are trying to lower rates, but they're balancing that by getting rid of deductions — some of which are very popular. The House, in the plan that they passed earlier in the month, decided that one of the deductions they were willing to part with was the teacher classroom expenses deduction. That would save some $2 billion, which sounds like a lot, but in the big scheme of U.S. tax code, it's small potatoes (federal tax revenue is in the trillions).

This has upset teacher unions and some Democratic representatives. "Will a teacher in my district who buys pens, pencils, paper for his students be able to deduct these costs from his tax returns under this plan?” Washington Rep. Suzan DelBene, a Democrat, asked at a hearing before the House passed their plan. She pointed out that teachers who buy pencils for their students can't deduct it, but that corporations buying pencils for their workers could.

And if teachers can't afford to buy school supplies, there's not necessarily someone coming to fill the void. In recent years parents have had a hard time paying for the supplies that their students need. And some of the supplies are necessary for teachers to create an engaging classroom, so teaching suffers without them. In either case, if teachers decide they can't afford to spend, it's the kids who are missing out.

Randi Weingarten, president of the American Federation of Teachers, denounced the bill, too, in a statement. "Trump said he would shake things up, but who would have thought he would hurt virtually every one of the millions who trusted him to help them? We will do everything we can to fight this bill,” Weingarten said in the statement. “This is a ‘which-side-are-you-on?’ moment, and we are on the side of those who work hard to make a better life for themselves and their families. This bill fails that test."

But there's hope that the deduction could survive, or even be increased, with the version that the Senate is pushing. The Senate would double the deduction to $500, costing about $1.5 billion in revenue. The House and Senate will need to settle on one bill in committee, so it's unclear what the final GOP plan will be. But the potential for scrapping it is very real.

The American Federation of Teachers has been closely following the tax cut bills and releasing statements at every juncture. Given the way schools are funded, with public money, tax cuts could have a big impact on the country's education system. Weingarten is also not a fan of the Senate bill — even though the tax deductions for teacher expenses would stay:

The Senate GOP tax bill keeps the same basic strategy of the House bill—giving big tax breaks to the rich and corporations, which the middle class is left paying for. A few pieces here and there in the Senate bill are better than in the House version, but why would the Senate GOP leadership pick and choose between what help hard working families get in order to fund the same giveaways to the rich?

The biggest hit to public schools could be a different change, the ending of the deduction for local and state taxes. The Center on Budget and Policy Priorities has identified this as a way that states could see their budgets shrink as pressure to reduce these taxes grow when they're not offset by the federal deductions. Weingarten said the move will "hurt local public schools and services while likely also causing unintended consequences by breaking the coherence between state, local and property taxes."

No matter how you dice it, the GOP tax proposals have opponents in public education.