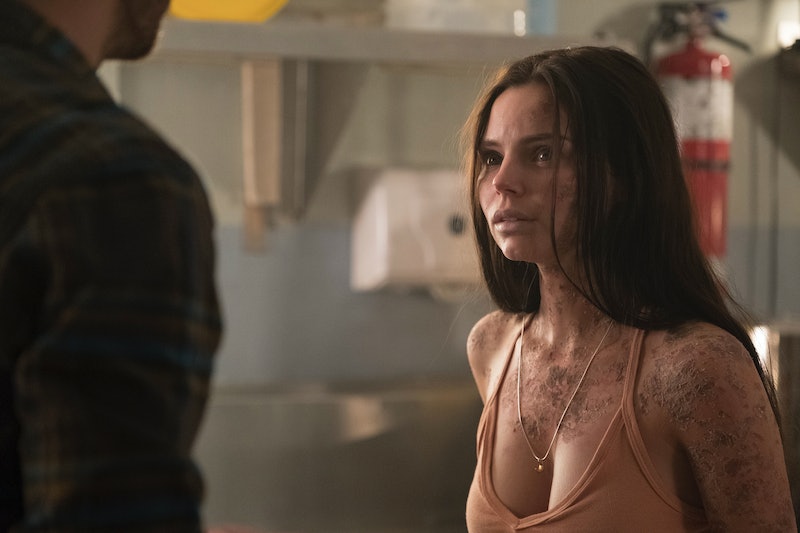 If you're looking for the family-friendly vibes of The Little Mermaid, you've got the wrong show. Freeform's new mermaid series Siren puts a deadly spin on how it depicts the mythical sea creatures. But while there is some gore, Siren is about much more than killer mermaids. According to star Alex Roe, who plays Ben Pownall, one of the human characters on Siren, the mermaids and their fictional culture in the show will make viewers question their own.

As a marine biologist who's initially skeptical about the whole mermaid thing, Roe's character in Siren is quickly confronted with what he considers to be the incomprehensible — a mermaid named Ryn (Eline Powell) who attacks him in the first episode. "He initially doesn't believe in the existence of these mermaids but he's confronted with one himself and then he kind of goes on this journey," Roe explains. "It plays with his mind, you'll see him battle what's reality and what isn't."

The reality of the mermaid world, it turns out, is fascinatingly complex. The mermaids aren't exactly benevolent — they can definitely get violent — but they're more than bloodthirsty monsters, too, and they come from a culture that's intriguingly different than our own. "The way that the mermaids in society work is a slightly more advanced society. It's a society that doesn't really see gender differences and feels as though relationships shouldn't really see sex as a problem," he explains.

Because the mermaids don't view gender roles or stereotypes the way humans do, their freer mindset may cause viewers to question current, real-life norms. "It's pushing the envelope in some way that this protagonist character is also a badass and is kind of gender neutral and not binary," Roe continues. "The relationships that come out of that are quite an interesting exploration."

While Ryn is clearly female, the mermaids also have an androgynous aspect to them. The mermaids don't really have breasts (at least not ones accentuated ones with nipples, though that's perhaps simply to get past the censors) and they go makeup-free, even on land. They seem to live in a world with less boundaries and rules, and according to Roe, there's a lot to explore when it comes to gender dynamics on the show. "There are mermaids, there are mermen. So I don't know, if you quite enjoyed The Shape of Water, that might float your boat," Roe says, perhaps hinting at some interspecies love in the future.

Ryn is no ordinary mermaid and she's certainly no ordinary lead. In the opening episode, she utterly destroys a man who attempts to make an unwanted move on her in a car. According to Roe, that's just a preview of what's to come. "That was quite a powerful scene. Our protagonist is a female and she's really badass and when she's messed with, she'll cause serious damage to whoever that person is," he says. "She's vicious, she has super strength."

But despite the badassery, Siren has a lot of heart at its center. Ryn's journey isn't a senselessly bloodthirsty one; she's in pursuit of a loved one. "What makes her really strong and [this] a feminist piece in some ways is that she's leaving her society to try to find her sister," Roe says. It's a story equal parts bizarre, violent, and heartfelt.

Overall, Roe seems excited about the complexities and uniqueness Siren has to offer. "It's exciting they're trying to be original and be at the forefront of what could potentially be a mermaid craze of some sort," he explains. "I've got a little nephew who will show up to his swimming classes with a mermaid tail, he feels more comfortable with his mermaid tail than walking on land."

If Siren helps break barriers and misconceptions of mermaids vs. mermen and women vs. men, bring on the killer mermaids.