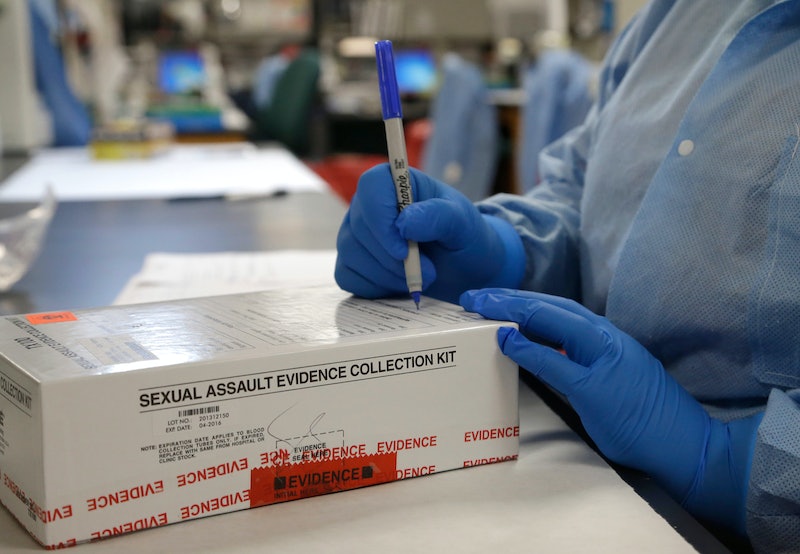 Campbell, 23, created the MeToo Kit, which aimed to be the first at-home rape kit. It’s a box containing swabs for a sexual assault survivor to collect DNA evidence off their body, rather than going to a hospital for a full forensic examination. The MeToo Kit is not yet available for sale, but Nessel said the company violated Michigan’s Consumer Protection Act by deceiving people into thinking the at-home kits were viable replacements for one performed at a hospital.

“This company is shamelessly trying to take financial advantage of the ‘Me Too’ movement by luring victims into thinking that an at-home-do-it-yourself sexual assault kit will stand up in court,” Nessel said in the release, pointing to a cease-and-desist letter she also sent to Campbell, demanding that the kits not be sold in Michigan. “There is absolutely no benefit here for victims.”

In a phone interview, Campbell tells Bustle, “We’re a small, two female company in Brooklyn, New York, and all we were trying to do is create a solution that would hopefully help survivors and this whole thing blew up.”

The story was quickly picked up by local media outlets in Michigan, and began to spread. Within a week North Carolina Attorney General Josh Stein similarly condemned the MeToo Kit as a “dangerous and misleading product.” The Manhattan District Attorney’s Office cautioned that “material collected with this product would be inadmissible in court.” And survivors' advocacy groups, from Oregon to Minnesota to Rhode Island, put out statements warning that no one should use the MeToo Kit.

Campbell still plans to move forward and says most of this has been a big misunderstanding. She tells Bustle that after she was sexually assaulted during her junior year in college on a study abroad trip, she, like the vast majority of survivors, didn’t report her attack to any authorities. She believed having the option of preserving evidence of a sexual assault at home, without having to tell anyone what happened, could help if a survivor decided later on to report it. She’s confident that her company can make an efficacious product.

“23andMe managed to make DNA collection foolproof for DNA testings,” Campbell says. “For women, we’ve been putting in tampons for ages, so sticking something inside our vaginas is pretty routine for us.”

MeToo Kits will include swabs to collect DNA evidence if there has been ejaculation anywhere, and packaging to collect pubic and head hair samples, according to Campbell. She says the company is still working out whether the kits will collect fingernail scrapings. Campbell says she consulted with attorneys, academics, and forensic biologists on creating the product before making it public, but she declined to share their names with Bustle, saying she didn’t have permission from those individuals.

The kit Campbell described isn’t as extensive as forensic exams done at a hospital, which are supposed to be free of charge to survivors under federal law. A typical sexual assault forensic examination at a hospital will also test for STIs and pregnancy, provide treatment options if needed, call in an advocate from a local crisis center, and document any bruising on the survivor.

“That could be internal bruising or internal damage, and I don’t know how an individual would do that for themselves,” Keri Moran-Kuhn, associate director of the Oregon Coalition Against Domestic and Sexual Violence, tells Bustle.

News of the MeToo Kit quickly spread through a national listserv for advocacy groups after Nessel called attention to it. The National Alliance to End Sexual Violence, an umbrella group for survivors' rights nonprofits, released a statement calling it an “obvious attempt to monetize the #MeToo movement, particularly in an irresponsible way that could have a disastrous impact on survivors of sexual assault.”

The biggest point of contention for advocates and experts is the chain of custody. If someone tried to submit a MeToo Kit as evidence, there’s no way of telling whether the kit had been tampered with, so it’s unlikely that it would be admissible in court. Campbell says the company is working on fixes for that issue, such as potentially having a witness sign an affidavit. She also says she’s interested in sitting down with Nessel to discuss how to alleviate those concerns.

The Founder Is Targeting The Kit At College Students

So far, the MeToo Kit has been geared toward college students. In a video that was posted to YouTube and Twitter and was reviewed by Bustle, but has since been taken down, Campbell gave a brief pitch about the MeToo Kit to members of the Alchemist Accelerator, a venture-backed startup incubator. She said the company envisions having MeToo Kits included in welcome bags given out on college campuses.

After being told the universities denied involvement with the MeToo Kit, Campbell claims her company was conducting a validation study with “a member of the forensics team” at the University of Toronto, and says she “received donations for Syracuse from a female veteran with associations to Syracuse.” NYU Tandon Digital Future Lab, another incubator for New York-based startups, later confirmed the MeToo Kit is part of its program but reiterated the university has no stake in the company and no agreement to purchase the kits.

Campbell says she’d been in the process of contacting various universities to see if they’d consider receiving donated MeToo Kits. It was a Michigan-based Title IX coordinator, who is also a former sex crimes prosecutor, that contacted Nessel after receiving one of those pitches, according to the attorney general’s office. Campbell insists the MeToo Kit is not “profit-driven,” and hopes that universities and businesses will buy the kits and then give them away so that survivors don’t have to pay for kits themselves.

“We are trying to do this in a way to help survivors such as myself, such as friends that I have, such as people that are all over the world,” Campbell says.

But the MeToo Kit isn’t the only at-home sexual assault forensic examination out there. A product called the PreserveKit appears to have launched on Amazon on Aug. 29, the same day Nessel told Campbell not to sell the MeToo Kit in Michigan, selling for $29.95. The PreserveKit was created by Jane Mason, a 28-year veteran FBI agent who worked on white collar and environmental crimes and became a private investigator in 2014, according to her LinkedIn profile. Her website boasts endorsements from another former FBI agent and a sexual assault nurse examiner.

Nessel’s office said they learned about the PreserveKit after telling the MeToo Kit to stay out of their state, and aren’t as concerned with that product. The PreserveKit’s site includes language noting that its product doesn’t do everything that examination by forensic professionals would, and that there’s no guarantee that evidence collected with their product will be admissible in court.

That language makes a difference, according to Nessel's office. Spokeswoman Kelly Rossman-McKinney says that unlike the PreserveKit, the MeToo Kit's website suggests the product could reliably identify perpetrators and portrays it as a replacement for a full forensic exam at a medical center. She says this discourages survivors from seeking medical attention or contacting law enforcement and deceives them into thinking the MeToo Kit could be used in court.

“The MeToo Kit company also made blatantly misleading representations about the admissibility of any evidence collected through its use,” Rossman-McKinney tells Bustle. “Though the company says it has not sold any of its kits yet, it has been building a ‘wait list’ based on unlawful marketing.”

Mason, who wasn’t available for an interview, posted a statement Thursday on the PreserveKit’s website noting that courts don't rule out evidence “for the sole reason that it has been provided by the victim,” and so she doesn’t believe it’s accurate to say at-home rape kits would never be accepted in court. However, Mason said she makes no promises her kits will pass muster, and acknowledges her product won’t address a sexual assault survivor's other needs, like tending to injuries and mental health issues.

“My concern is if [a survivor] did this kit at home and tried to submit to their local officer, they could be further re-traumatized when law enforcement says no and rejects it,” Moran-Kuhn, of the Oregon Coalition, tells Bustle.

For her part, Campbell says she plans to continue moving forward trying to develop and launch the MeToo Kit. She hopes that the increased attention to the kit will bring people to the table to resolve concerns with her product.

“I have no idea why this is happening,” she says. “All I want to do is work with attorneys general, with survivors’ groups, with allies to get this right.”