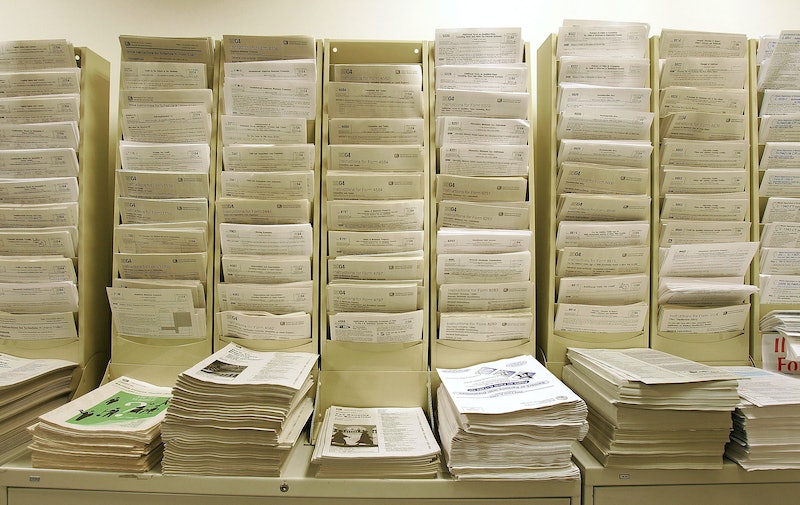 Tax season can be a stressful time for people all over the financial spectrum. And this year, with reports about tax code changes impacting refunds, there appears to be a bit more confusion than before. To help clarify what's going on, Bustle spoke to an expert about how the new tax law might affect people in 2019.

The first part of the confusion has to do with why the average American taxpayer has had slightly heftier paychecks since the overhaul went into effect. The answer is that, under the law, taxes were pretty much lowered across the board. Julie Roin, a University of Chicago Law School professor who specializes in taxation law, tells Bustle that because most taxpayers have had fewer taxes withheld on their regular paychecks, they've experienced a boost in their actual pay.

"The thought," she says, "was that this would make them happier, and like the tax bill and the Republicans."

However, those changes may have been so nominal that they have largely gone unnoticed — until now. 2019 marks the first time that most people are filing annual taxes since the new tax law went into effect, and some are seeing their tax bills and refunds suffer as a consequence of those slightly heftier paychecks. The reason why has to do with tax withholdings.

If you work for someone else and are on a regular payroll, there's a good chance that you have a certain amount of taxes taken out of your paycheck every pay period. The exact figure should be available to review on your pay stubs.

How much is taken out is based on how many allowances you entered on your most recent W-4 form, which people typically fill out at the beginning of a new job. Using a table provided by the IRS, most employers withhold a certain percentage of money from their employees' paychecks based on that figure. Because taxes have been lowered, the Treasury Department and IRS distributed an updated version of that table.

But the tax withholding table is not an exact science, given that every person's financial situation is slightly different. As a result, there have been unexpected consequences for some taxpayers. Because most employees don't alter their W-4 allowances from year to year, their paperwork is potentially out-of-date, especially if it was filled out before the tax overhaul went into effect. Instead of having more than enough money withheld from every check, some aren't having their employers set aside enough. And as a result, some people's refunds are smaller than in previous years. Some people have even found that they unexpectedly owe taxes.

"The new withholding tables probably over-corrected for the 2017 tax act, leaving many people underwithheld, so that they owe money in April," Roin explains. "That is, their paychecks were a bit higher than they should have been over the course of the year, and they now have to 'true up' their accounts by paying more money to the government."

While the average person may not have seen these issues coming, some tax preparers did. So much so that the New York Post reports that H&R Block employees had to undergo "empathy training" to help them respond to clients who may be upset about their smaller refunds or larger tax bills.

"In past years, these tables tended to err a bit on the government’s side, so that most people were 'overwithheld' and entitled to refunds at the end of the year," Roin explains. "But these automatically withheld amounts always represent just a guess as to what an employee’s actual tax liability will be at the end of the year, and could be either high or low."

Congress passed the tax overhaul — officially called the Tax Cuts and Jobs Act — in December 2017, and changes have been rolling out since January 2018. President Trump has long championed the law, and most Republicans have followed suit.

“It’s going to a tremendous thing for the American people,” Trump told reporters when he signed the bill into law, according to the Washington Post. “It’s going to be fantastic for the economy.”

But while Republicans praised the changes, critics took issue with provisions that some said prioritized giving tax breaks to corporations over helping out the average person. Although tax cuts were instituted across most of the board, the more significant reductions were for corporations and the wealthy, according to analyses from the time. On top of that, the tax breaks for corporations are permanent, whereas individual tax breaks are set to expire in 2025, leading some to question who the law was actually intended to benefit.

As these changes unfold, one thing to keep in mind is that it's still pretty early in tax season. That being said, many have definitely felt the changes, and if you're at all concerned, you may want to speak with your employer about your current tax paperwork, because for the time being, the new tax law is here to stay.

More like this
The 10 Best Shoes For Beach Walking, According To An Expert
By Alexa Vazquez
What Is Megan Thee Stallion’s Net Worth? The Traumazine Hitmaker Isn’t Worried About A Budget
By Hugh McIntyre
Gemma Collins' Net Worth Is Only Going Up
By Catharina Cheung
What Is Brad Pitt’s Net Worth? The Bullet Train Star Now Makes 8 Figures Per Film
By Hugh McIntyre
Get Even More From Bustle — Sign Up For The Newsletter