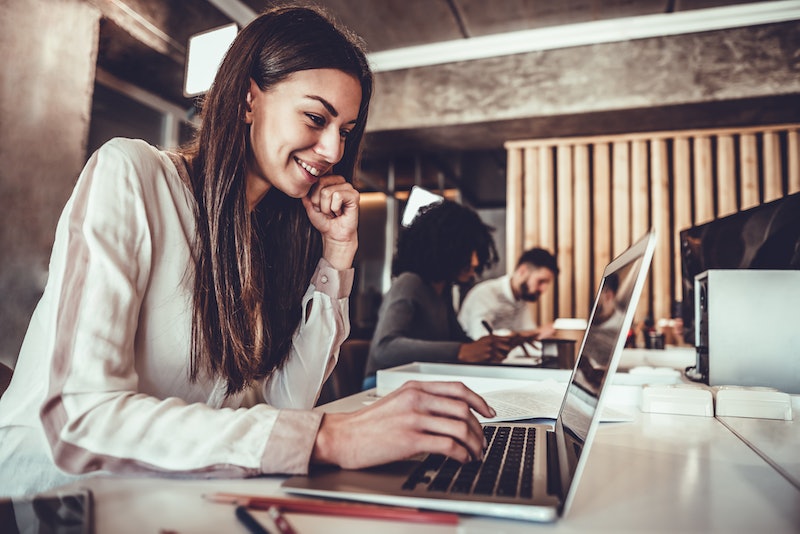 The October full moon will reach it's peak in Aries on Sunday, October 13 at 5:08 p.m. ET. Though we'll be in the swing of Libra season, our celestial an astrological influences will be mixed. As such, you'll want to know how the October 2019 full moon will affect your work, based on your zodiac sign, because our experiences will be varied, to say the least. While some signs are supremely sensitive to the Aries influence, other signs are more attached to the Libra influence. And other signs have their own unique full moon experience altogether, every month.

If your work week is going to be stifled or propelled by the October full moon, a head's up will help you prepare to either make the most of it, or put in some last minute efforts to avoid complications. Bustle talked to astrologer Lisa Stardust about how the hunter moon will affect us individually. According to Stardust, generally, it can boost your professional status, but that will depend on how you use your energy during this time.

Tasks that had before seemed hard to complete are now easily within your power, so don't sell your abilities short. If there's something that you've been failing at or missing the mark, trust that you have the extra bit of energy right now to make a breakthrough. Now, onto how the October full moon will affect each zodiac sign, because let's be real: all signs and full moon experiences are not created equally.

According to Stardust, you’re emotionally drained, which may be why you’re feeling unloved and under appreciated at work. "Don’t stress! You’re the number one person on the team and your colleagues know it too," Stardust cheers. So, be proud of yourself and accept the compliments. You deserve them.

"Drama may come from coworkers," Stardust warns, so be sure to kindly address issues to avoid massive arguments. It can be tempting to get involved, but if you do, your productivity will be shattered, so stay busy.

"Stay true to your professional convictions. Even if it ruffles some feathers at the office, at least you will be true to yourself," Stardust tells Bustle. If there's something you want to pitch or bring attention do, trust that it will be received well in the end, and speak up.

You've been working really hard, and according to Stardust, a promotion is coming your way. Don’t be shy about celebrating, you deserve it and you're ready for the next level.

Stardust warns Leos away from gossiping with colleagues. "You may be the one who gets the blame, even if you didn’t start the rumor," so if you don't want a bunch of office drama to get in the way of your productivity, stay way from the chat circles under the October full moon.

Stardust gives Virgos permission to ask for a raise under this luminary. "Trust, you’ll be the recipient of major financial gifts as a token of their appreciation for you," so if you've been tip-toeing around asking for that raise, now is the time.

According to Stardust, you’re extra exhausted now, "which may cause you to lag on impending projects." To make sure your performance doesn't slip and that you don't let projects go past their deadline, ask for help. It will look better that you made an effort before falling behind, even if it doesn't feel that way.

"Use your words to structure a new professional vision. Email the higher ups to show them your dreams, which can boost their company too," Stardust suggests. It can feel scary to be bold with your boss, but if you don't let your them know how many good ideas you have, they might never know to ask for them.

You've been working really hard and deserve to be fairly compensated. Sometimes we can feel shy about taking overtime, but Stardust reminds that your time and work are deeply valuable and letting the universe know you believe you deserve proper pay will do more for you spiritually than just get you a fair paycheck.

Cap is going to have to do some thinking about their professional life under the October full moon. "A promotion is in place — but, is it worth the personal sacrifices you’ve had to recently make?" Stardust asks. It’s time to reassess your plans and make sure you're on the path you mean to be.

"Discuss your future plans with your boss now. They may help elevate your future by lending unforeseen support," Stardust instructs. Don't put off the scary conversations any longer, the sooner you confront your needs, the sooner they can be met.

You want more, but you've been nervous about asking for it. Whether it's a raise, a promotion, or a project that wasn't assigned to you. According to Stardust, the October full moon is shining in your favor, making you look pretty good at what you do, so whatever you ask for you're more likely to receive.