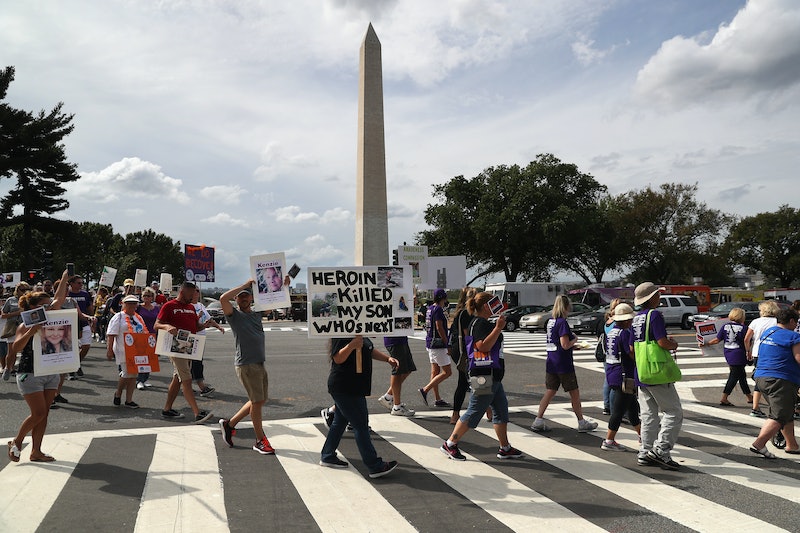 As anyone between the ages of 18 and 35 knows, sociologists love to talk about Millennials. We're often criticized in thinkpieces and 'hot takes' for our apparent self-absorption, or entitlement among other things. But few trend pieces have focused on one of the most significant shared experiences amongst American Millennials. We are coming of age during what may be the worst public health crisis in American history: the opioid epidemic.

Generations are sometimes characterized by a public health crisis, like the "AIDS Generation" that came of age in the 1980s when little was known about what caused the lethal disorder and how to combat it. The shared fear and trauma of watching their peers suffer defined the generation in many ways.

Millennials may also be defined by a public health crisis.

The carnage of disease epidemics is a difficult thing to quantify, but in terms of annual American deaths, the opioid epidemic is actually worse than AIDS. AIDS took the lives of 51,000 people in 1995, the worst year in American history for AIDS deaths; 52,000 people died of opioid overdoses in 2015 alone. Things may even be getting worse: according to the Department of Health and Human Services, 3,900 Americans start non-medical opioid use every day.

With such a high rate of new users, some experts are deeply concerned that the crisis is only intensifying. "I believe we are at the beginning of the epidemic," David Patterson Silver Wolf, a Washington University expert on drug addiction and treatment, tells Bustle.

One of the biggest problems in stopping the opioid crisis is that many opioids, including OxyContin and Vicodin, are prescribed legally for pain sufferers. They are so widely available that in 2012, in 12 states, there were more opioid prescriptions written than there were residents, according to the Centers for Disease Control and Prevention. That availability means that opioids may be among the easiest drugs for millennials to get their hands on.

Sharon Levy, who directs the Adolescent Substance Abuse Program at Boston Children's Hospital, suggests that many millennials who struggle with opioid addiction first acquire the drugs from someone else's legal prescription. "I would say the biggest problem with opioids is the reservoir of prescription medications that can be found in medicine cabinets in homes around the country," she tells Bustle. "Many of those pills were prescribed to someone else in the family and are just sitting around in places where kids can get into them."

Fortunately, despite the fact that Washington D.C. is defined by political polarization, one rare thing many Democrats and Republicans seem to agree on is that something must be done to address this crisis. In an attempt to limit the number of opioids in circulation on the street, Ohio Governor John Kasich recently limited opioid prescriptions to seven days at once, and New Jersey Governor Chris Christie recently created a five-day limit, the shortest in the country. "Shutting down this avenue to addiction [is] an essential prevention strategy," Governor Kasich's office said in a press release accompanying the new limit.

"Unfortunately, death rates in the population are still rising so there is much more work to do."

Last month, Missouri Sen. Claire McCaskill announced an investigation into the pharmaceutical companies that produce opioids, aimed at determining what those companies knew about the potential for opioid abuse, as well as how opioids were marketed to consumers and physicians.

Drew Pusateri, communications director and senior advisor to the Senate Homeland Security and Governmental Affairs Committee (of which McCaskill is the ranking member), tells Bustle that the investigation is aimed at "shedding light on what these companies were engaged in, from a sales and marketing perspective ... so that history won't repeat itself and so some of these companies could potentially course-correct."

Pusateri also stresses the gravity of the existing crisis, calling it "the first great drug epidemic of the millennial era."

Death rates, in particular, seem to be hitting Millennials the hardest, particularly as opioid addicts switch from other people's prescriptions to street opioids like heroin. The American Council on Science and Health recently reported that Millennials between the ages of 25 and 34 were the likeliest to die of a heroin overdose — and that one out of every 12 deaths amongst people in that age group could be attributed to heroin.

The first great drug epidemic of the Millennial era."

Limits on prescription availability and investigations into pharmaceutical companies may be positive steps towards ending the opioid crisis, but it's still clear that this fight is far from over. Proposed healthcare overhauls like the American Health Care Act aimed to remove requirements that insurance providers cover drug addiction treatment. While the first attempt at passing the AHCA failed, it's not inconceivable that new healthcare plans also wouldn't include treatment. And that's assuming that addiction sufferers even have access to insurance — many Millennials still report that they cannot afford insurance, according to CNBC.

There are some glimmers of hope. Two recent long-term studies found that opioid use among American youth was declining, according to NPR.

"I would actually say that the epidemic is slowing down a bit in youth. We have seen changing prescribing patterns which I believe are starting to make a difference," Levy tells Bustle.

However, neither millennials or the country at large is out of the woods with this epidemic just yet, Levy adds. "Unfortunately, death rates in the population are still rising so there is much more work to do."