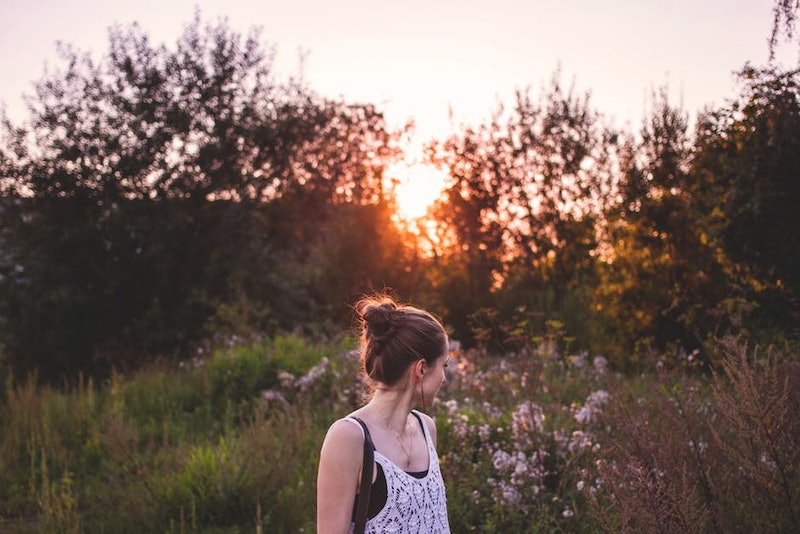 As the Great American Eclipse slides its way across the U.S. continent, some of you may be feeling a little... off. Maybe it's because you forgot to buy eclipse glasses in time and you're going to have to use a colander like some noob, or maybe you're just tired of endless eclipse coverage. Or, to quote that guy in your office with the creepy mustache: "Maybe it's your period."

How does the solar eclipse affect your menstrual cycle? For much of history, menstrual and lunar cycles were seen as connected ‚ they both last approximately 28 days, they both involve "tides," and at some point during both cycles, a few people transform into vicious wolves... If these two cycles were in fact connected, it would stand to reason that an event as momentous as a total solar eclipse would have a pretty significant impact on our periods.

But there is no concrete evidence to support this hypothesis. As women's health acupuncturist and infertility specialist Kristen Burris, L.Ac. told Romper earlier this month, “Although many believe the eclipse foretells doom or danger upon us all, it is wrapped only in mystic beliefs and has no scientific validity on negatively affecting one’s health.”

“In the 18th century, before chemicals, pollution, toxins, processed and genetically modified foods, women menstruated together as one during the new moon,” Burris said (coincidentally, period-ing with a bunch of other people and without any processed foods to comfort me is also my recurring nightmare). “However, today, we are suspect of the moon’s influence due to the complexity of this historical relationship paired with the drastic environmental, pharmaceutical, and emotional changes in our society today.”

Still, some people feel certain that the unique celestial energy present during an eclipse has an effect on women's bodies.

"Think about the power of the moon's gravitational pull on the tides. Now imagine what that may do to our body as well," Allison Walton, a women's health and integrative nutrition specialist told Marie Claire.

The magazine also interviewed Astrologer Colin Bedell, the founder of Queer Cosmos, who said: "According to the metaphysical tradition, the new moon cycle, which is what the solar eclipse is, is the perfect time for the woman to begin menstruation. Women are going to feel the urge to clean house — that's what the hormones are doing. It's a total release."

So, there might not be any link between the eclipse and one's menstrual cycle. But personally, I was inspired to do a rather thorough cleaning of my kitchen today, so make of that what you will.