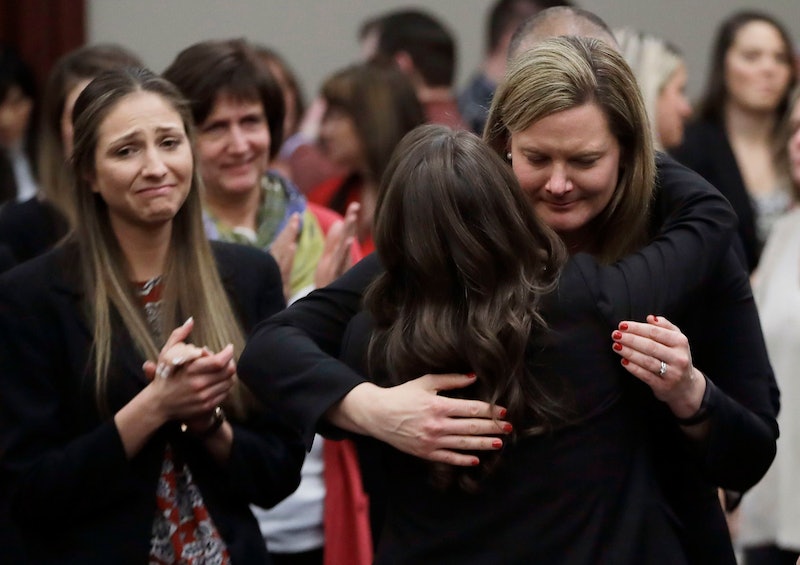 The 233-page report, prepared by law firm Ropes & Gray, detailed the "inaction" from Scott Blackmun, former chief executive of U.S.O.C., and Alan Ashley, former U.S.O.C chief of sport performance, who learned of abuse allegations by Nassar from Steve Penny (at the time CEO of USA Gymnastics) but didn't share the information with more people within U.S.O.C. "The U.S. Olympic community failed the victims, survivors and their families, and we apologize again to everyone who has been harmed," Susanne Lyons, an U.S.O.C. independent board member and an incoming board chair, said in a statement.

More than 330 women and girls came forward with allegations of abuse against Nassar dating back to the 1990s, according to The Washington Post. His victims ranged from a family friend to Olympians Aly Raisman, Gabby Douglas, and Simone Biles. In January 2018, Nassar was sentenced to 40 to 175 years for 10 counts of sexual assault.

"The USOC board commissioned this independent investigation because we knew we had an obligation to find out how this happened and to take important steps to prevent and detect abuse. We now have a much more comprehensive view of individual and institutional failures," Lyons said in a statement. "Everyone in the Olympic and Paralympic community, including the USOC, must learn from the report and take appropriate actions to strengthen protections for athletes. We recognize that we must do more, and we will do more."

The report concluded that "Nassar thrived in this loose governance model" between U.S.O.C. and the national governing bodies like USA Gymnastics. "The U.S.O.C. had minimal interactions with him and deferred to USAG, which in turn permitted Nassar to create a personal fiefdom where he wrote the rules and set the tone for the medical treatment of the women's gymnastics program for close to 20 years — overseeing medical care at USAG events, serving as the point person for approval of any outside medical providers, and participating in drafting rules governing sexual misconduct by the medical staff," the report concluded.

USA Gymnastics wasn't the only national governing body susceptible to this problem. "The effects of the USOC’s self-limiting governance structure extended beyond USAG, and likewise permitted other NGBs to implement policies and practices that failed adequately to address the risk of athlete abuse, resulting in patterns of deficiencies in complaint processes across Olympic sports," the report concluded.

There was no management, the report found. "USAG engaged in essentially no oversight of Nassar throughout the lengthy period of his serial sexual assault of gymnasts," the report concluded.