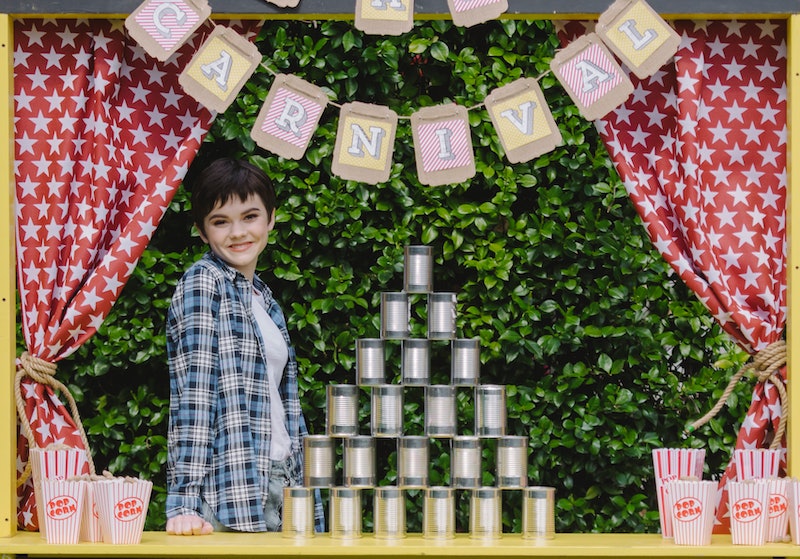 For kids growing up in Los Angeles, lemonade stands are just something you do. When you’ve got a lemon tree in your yard, like Lulu Cerone did, it’s a natural way to spend a free afternoon with your friends. So, when Cerone found herself overwhelmed by the 2010 earthquake that ravaged Haiti, she was sure she had to do something — and, at just 10-years-old, she found a way to turn that ubiquitous backyard hobby into a philanthropic empire.

It was that first lemonade stand — a competition between the boys and girls of her fifth grade class to see who could raise the most money — that gave birth to LemonAID Warriors, her philanthropic organization that has raised over $100,000 and reached more than 4.2 million people.

I was a small 10-year-old and at first I felt powerless, like there really wasn’t anything I could do to help this.

"It was the first time I guess I was exposed to a global tragedy on that scale," Cerone tells Bustle. "I remember looking at images and just feeling this urge like I wanted to help in any way I could. But obviously this was a huge tragedy and I was a small 10-year-old and at first I felt powerless, like there really wasn’t anything I could do to help this."

That one effort, raising $4,000 in two weeks, led Cerone to team up with brands like Mattel and Forever 21 and have her work highlighted by the United Nations’ Sustainable Development Summit. She even wrote a book called PhilanthroParties!: A Party-Planning Guide for Kids Who Want to Give Back all about integrating philanthropy into young people's social lives. The book dropped in in May 2017.

And — oh, yeah — did we mention this all happened before she graduated high school?

“[After the first stand] I wanted to keep going and make it official and inspire other kids to do this thing, show other young people that even though we’re young we’re not powerless,” Cerone says. “We actually have an incredible amount of power, we just have to really focus and put our passion into action."

Cerone’s focus on harnessing that power inside of young people inspired her to outline her philanthropic strategy— what she calls “philanthroparties” — early on, so that others can become involved. She said that, like the lemonade stands, the goal was to find ways for philanthropic causes to come naturally and fit into the busy lives of young people. A "Philanthroparty," she says, is a way to introduce fundraising, philanthropy, and "doing good" into something kids are already doing — just hanging out and having fun together.

“I feel like young people, teenagers, younger kids, get bad reps for being self-centered and apathetic and I really find that not to be the case,” she explains. “I feel like young people are the most compassionate and a lot of the times really in tune with their surroundings and a lot of the times are filled with desire to help out and to really turn these ideas into something real and tangible. But they might lack the tools.”

For Cerone, LemonAid warriors worked to give young people those tools to take their hang-outs and “actually do something tangible with their passion and desire to help.”

She says that while her initial philanthropy was more removed — dealing with complicated international issues like the global water crisis or disaster relief efforts in Haiti — her growing activism is a bit more personal.

I want to be able to address social justice in tangible ways and I find that there’s a need to bridge the gap between philanthropy and activism.

“I want to be able to address social justice in tangible ways and I find that there’s a need to bridge the gap between philanthropy and activism,” Cerone says. “They’re both such important things: Philanthropy is focused on donations and raising money while activism is more advocating for causes and really putting yourself out there in a positive way that spreads the message.”

Citing her own experiences of coming out as queer and familiarizing herself with LGBT activism, Cerone says she's looking forward to diving into that daunting advocacy work and putting herself out there.

For a philanthropic whiz kid, lauded for her impressive work and know-how at such a young age, there are always, always questions about what’s coming next. And, of course, they can be difficult to answer, Cerone says, when everyone expects her to have all the answers already.

She has some idea of what’s coming next: college in New York City next year, handing off LemonAID warriors to her vice president, and taking those timid first steps into a more personal kind of activism among other strides forward.

I feel like people expect me to have it kind of figured out more, like to know exactly what I’m going to do and everything.

Still, Cerone said that she’s also making peace with not having a set plan just yet.

But, Cerone also understands that she’s staring down a situation of forging her identity and creating space for herself to grow into her activism — and that that challenge is pretty normal for someone her age.

As long as you’re doing what you love and what you’re passionate about, things will work out.