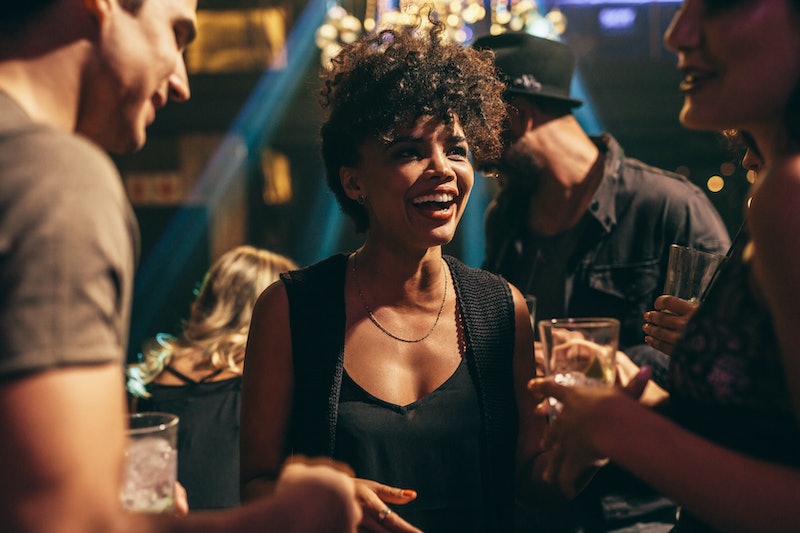 Whether dating apps are causing a "dating apocalypse" or are merely the easiest way to get a date, there's no denying these tools have been total gamechangers in the dating scene within the last few years. And even though dating apps are most popular among Millennials, according to a recent Bustle survey with dating app Happn of over 1,000 dating app users, 78 percent of women and 85 percent of men still want to meet people IRL. That's why for the second year in a row, Bustle is deeming April, "App-less April" and encouraging our staff and readers to delete their dating apps for 30 days and meet people the old-fashioned way: offline. With participants tracking their progress and tricks and tips from dating experts, we'll be helping you feel empowered to meet people IRL all month long. Today's topic: how to actually meet someone at the bar.

True story: I met my husband at a bar. It turns out that we both had a friend in the band that was playing that night, but neither of us were really supposed to be there. He stopped in unexpectedly after a bad date, and I had a good friend drag me out after another friend canceled on our plans. The music was great, but all I can remember about that night was chatting up this guy over drinks... and, ahem, sharing a steamy cab ride home. But, as someone recently pointed out to me, that was back in the "olden days". Back — in 2009 — when I wasn't *quite* as glued to my phone as I am today, and before dating apps became the new normal. Hell, there's even such a thing as dating app burnout now. That's why, as a part of Bustle's App-less April, a challenge to delete your dating apps for one month and focus on offline dating, Bustle spoke with founder of The Professional Wingman, Thomas Edwards, as part of a recent App takeover to find out the best way to actually meet someone while out at the bar in 2017. Here's what he had to say:

"The path to connection is through rejection," Edwards says. "It’s unavoidable. In fact, if you’re not experiencing rejection, you’re likely not putting yourself out there enough."

To get over your fear of approaching strangers and get more comfortable with the whole idea of meeting someone IRL, Thomas suggests practicing before your night out at the bar. "Chat with the barista at your favorite coffee shop. Talk with the cashier at the grocery store. Smile and say 'hi' when you walk by people on your way to the office. Those small moments will build enough momentum to make it easier for when you see someone you really want to talk to."

No, you don't have to throw on lipstick and heels to make an impression. But Edwards says that color and confidence are important to keep in mind when picking out what you're going to wear. "Color of any kind will make you stand out, especially when most around you will be wearing black," Edwards says. "You also want to wear clothes that make you feel confident, as that will also help your perspective when going out. I encourage you to experiment and see not only the reactions you get from the people around you, but how it makes you feel."

Inviting a friend out with you is a great idea, but they've got to have four key characteristics. According to Edwards, a great wingwoman will be social, selfless, savvy, and stealthy. This friend should help to make sure that you're "the most desirable person in the room, having the most fun." But it goes beyond that, Edwards says. "When you're in unpredictable environments like bars, you never know what will happen, so it’s important to be resourceful and make sure you and your friend’s experience runs without a hitch, whether it’s slipping the bouncer a $20 so you don’t have to wait in line, or tipping the bartender heavy at the beginning so you get speedy service, there’s always something you can do make life easier."

Oh, and Edwards says that no one should know what you or your wingwoman are doing. That's the key!

Edwards does suggest "for women to be more proactive than reactive" to give yourself "more options to vet through" when out and about, but if you're shy and a bit uneasy about making the first move there are some things you can do to appear more approachable (you know, so people come to you). Edward's strategy — an acronym called S.O.L.D. — is made up of four basic components:

According to Edwards, basic nonverbal cues like smiling, uncrossing your arms, and leaning your body toward what you're attracted to are all great ways to appear friendly and more approachable.

So you made *actually* made a connection with someone at the bar — now what?! Edwards says it's best to "exchange numbers, have them saved in each other’s phones, and have an intention for what will happen next." This will increase both of your odds of getting a follow up call or text and, you know, making plans for the first date.

Not so lucky the first time around? Meeting someone IRL might take some time, but "it’s important to decide what you want and what you need to do to get it, even if it’s difficult," says Edwards. If you're really interested in dating and maybe even a relationship, then you're going to have to step outside of your comfort zone. "Want to know what else is outside your comfort zone? Your next date," Edwards says. "Netflix is awesome. If you want that 'chill' to come with it, you’ve got to get off the couch."

Now get out there and meet some people IRL!