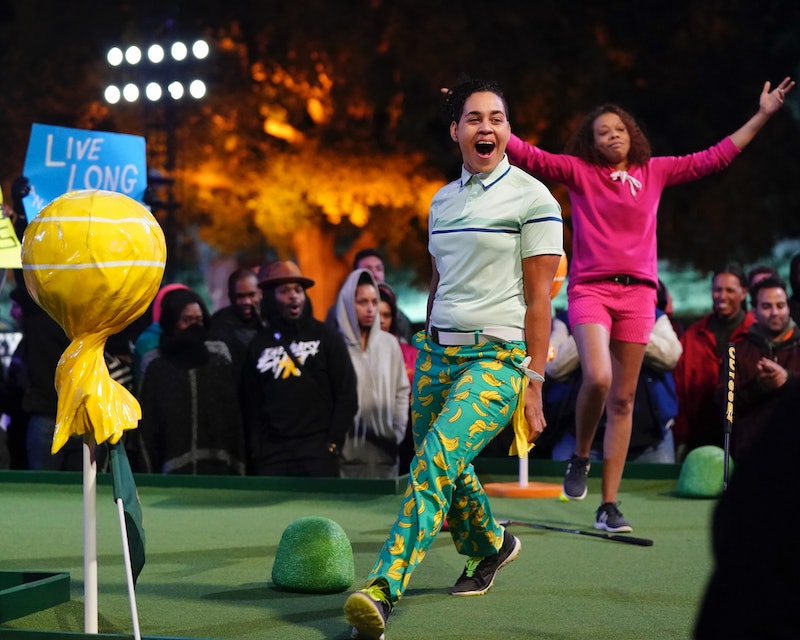 So you've always wanted to achieve reality television success but you can't sing or dance, or imagine living in a house where people stop being polite and start getting real? Can't stomach bugs or physical challenges? Not a problem. You don't need any of that to apply for Holey Moley, the new competitive golf show premiering on ABC on June 20, where the only thing that one must have is a love of all things putt-putt. And who doesn't love mini golf?

The rules of Holey Moley are simple, but the obstacles concocted by executive producer Stephen Curry in the series make the run-of-the-mill miniature windmill all but obsolete. Contestants are brought to a mini golf course and must square up against a menagerie of mini golf obstacles that will determine who amongst them is worthy of attempting to scale Mt. Holey Moley, the ultimate challenge. Whoever dares to take on Mt. Holey Moley and succeed wins a Golden Putter trophy, a Holey Moley plaid jacket, and a $25,000 cash prize. Not bad for a round of really hard mini gold.

The application site for Holey Moley suggests that filming for the show's debut season ended in March of 2019, so if you're watching this summer and want to try your luck, you may have missed your chance. But if it all goes well and it gets renewed for another season, you're going to want to hop on the application process.

If that is the case, there's no better time than today to start preparing for your Holey Moley audition tape.

To prove that you know your way around putt putt, the application website calls for sending in a video showcasing your mini golf skills. The site asks for a video in which you introduce yourself and explain not only why you love mini-golf, but how $25,000 could significantly impact your life. Then, applicants are asked to showcase their own golfing "look" by giving the casting team a look at when their golfing profile may look like on television by providing video of a "golf swing down the line, from behind," and a "golf swing face-on."

The applicants are also asked to provide video footage of them completing "5 putts at 5 ft" and a clip of them "using an obstacle to putt a ball towards a hole or goal."

That last video may be the single most important clip that gets sent, so putting together a complicated or impressive mini-golf shot is totally worth it. While the idea of "American Ninja Warrior but make it mini-golf" may have just been wild enough to ensure the show made it to air, there's no guarantee that the show will return and accept new applications. One can only hope.

If Holey Moley does get renewed, you better get your best golf look together, practice your swing face, and get the camera rolling. Because you definitely want that jacket and Golden Putter trophy. Or at least a chance to say you took on Mt. Holey Moley.