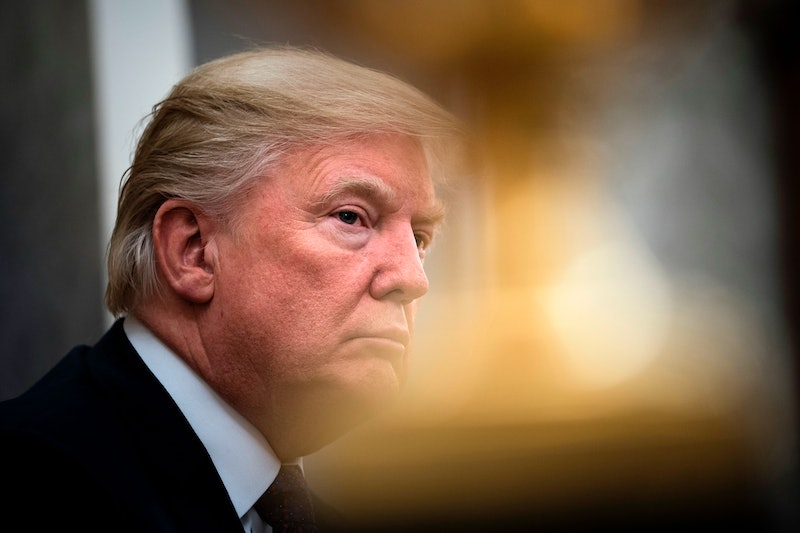 I'm not going to lie, I like to argue. And you know what? I'm good at it. I take on Donald Trump and his terrible policies for a living, and I'm not afraid to go head-to-head with Tucker Carlson — or any other conservative in a bow-tie. And do you know why I'm not scared? I worked in the Obama White House. I spent years of my life crafting policies that protected the most vulnerable Americans. Every man, woman, and child in this country should have a shot at the American dream and I'll be damned if I let anyone convince me otherwise.

But enough about me. Let's talk about you. Do you like affordable health care? Do you think the ACA has its problems, but it's better than nothing? And way, way better than the Republican option? You're not alone. The ACA is more popular than ever before — despite the GOP's numerous failed attempts to repeal and replace it.

But President Trump hasn't gotten the message. This month he began to dismantle key parts of the law, piece by piece. First, he announced he was immediately ending the ACA's cost-sharing reductions, the subsidies that help the poorest Americans afford care. He also signed an executive order that would make it easier for people to purchase "association plans" that were originally not included in the ACA. Though these plans are lower cost, they actually offer fewer benefits and customer protections.

But health care is complicated. Even if you support the ACA, it's difficult to understand — and argue against — Trump's latest attacks. But these changes are, to use Trump's favorite word, yuuuuuuuge — and they'll affect millions of people. So just like Trump is ripping apart the ACA from the inside out, here's how you can argue against each of his decisions, blow by blow.

Trump made the following argument when he signed his executive order that allowed insurance companies to offer "association plans":

This is promoting health care choice and competition all across the United States. ... This is going to be something that millions and millions of people will be signing up for, and they're going to be very happy.

Trump's normal bombastic promises aside, he is clearly appealing to Americans' affinity for individual freedoms and personal choice. But in reality, his latest health care decisions will take away individual freedom, not add to it.

Association plans' entrance into the health care marketplace will destabilize the market, throwing costs and plans into even more disarray. They will also not be subject to some of the ACA's most important requirements, like ensuring health plans cover maternity care, prescription drugs, and necessary hospital care. The ACA was created to make sure insurance companies couldn't skimp out on benefits — this executive order ensures they can.

"Like so many things Trump does, there's zero logic to support his actions: You can't give people more freedom by taking it away."

He also announced this month that he was immediately ending the ACA's cost-sharing reductions, the subsidies that help the poorest Americans afford care. By eliminating the subsidies that allow insurance companies to offer affordable plans to low-income Americans, Trump is pushing insurance companies to leave the health care market, which in turn, will leave Americans with fewer choices.

In fact, back in August, the nonpartisan Congressional Budget Office (CBO) calculated that if cost-sharing subsidies were phased out, nearly 5 percent of people who buy health care through the ACA exchanges would be left with no options. That's millions of Americans with less freedom, not more. And even if insurance companies choose to stay in the market, they'll need to recoup that lost money somewhere — and many experts believe they'll do that by raising premiums on everyone else.

So let's just put this in plain English: Poor people will have to spend more on the same health plans and everyone else will spend more on a lesser-quality plan. Doesn't exactly sound like a choice anyone would make...

"One person, not even the president, should not be able to sabotage the hard work of the legislative branch of the American government to make changes that were already rejected."

So there's the complicated policy answer, if you really want to go to town on someone's ignorant Facebook post. But there's a simpler answer, too, which is that Trump can't increase individual freedom and personal choice by going against what the vast majority of Americans want. Like so many things Trump does, there's zero logic to support his actions: You can't give people more freedom by taking it away. About 70 percent of Americans would rather Trump make the ACA better versus force it to fail and compel Congress to create a replacement. By ensuring Obamacare will fail, Trump is defying the will of the American public.

If you think about it, Trump is saying he's giving people more choices — by going against what they've chosen for themselves. Oh, and he also slashed the advertisement budget for the ACA's open enrollment period by more than 90 percent, ensuring fewer Americans will know about all the choices available to them. So much for individual freedom and choice.

Argument #2: Trump's changes are constitutional and definitely well within his bounds as President to make

Wrong. It's one thing to issue an executive order about something Congress hasn't discussed and doesn't seem likely to take up. But it's a whole other move to issue an executive order that blatantly disregards a decision Congress has already made. After all, Congress has had the opportunity to make the same changes Trump just decreed since the day Obamacare became law. But they didn't — time and time again, the hundreds of democratically-elected representatives of American citizens decided to keep the ACA in place.

And then there's Donald Trump, who did not win the popular vote, unilaterally deciding to go against the will of the people. One person, not even the president, should not be able to sabotage the hard work of the legislative branch of the American government to make changes that were already rejected.

"It wasn't enough for Trump to viciously harass the first black president over and over again, President Trump wants to make sure President Obama's legacy is destroyed."

President Obama (who, it's worth pointing out, was a constitutional law professor) worked with Congress to hold 25 consecutive days of session before the ACA was passed, the second-longest review session ever. This ensured that Congress, and by extension the American public, ultimately decided to make the ACA law. It also made sure that the public had the time and information they needed to fully understand the law and voice their opinions to their representatives.

In other words: it was a fully functioning government process that allowed for the separation of powers, and not one poorly-informed man making unilateral decisions for the entire country.

Argument #3: Trump's making these decisions for the right reasons — he thinks they're the best move for Americans

Since he took office, Trump's statements, policies, and agenda have shown that he's not looking out for the best interests of all Americans, only a certain group — a group of Americans that look and act a lot like him: white, male, cisgender, straight, and wealthy. And while he may present these decisions as benevolent, Trump's latest moves to destabilize the health care marketplace are actually just more veiled attacks on President Barack Obama.

Back when Trump was just a racist reality star, he entered the political arena as grand wizard of the birther movement, a disgusting, baseless campaign that claimed Obama wasn't actually from the United States. He doggedly demanded Obama show his birth certificate for five years, continuously attacking the president's legitimacy and awakening the worst demons within our country.

Since entering office, Trump has continued his attacks on his predecessor by working to dismantle Obama's biggest achievement: affordable health care. It wasn't enough for Trump to viciously harass the first black president over and over again — President Trump wants to make sure President Obama's legacy is destroyed.

While other presidents may have also tried to dismantle Obamacare, no one else made it to the White House thanks to a noxious conspiracy theory built on white supremacy and hate. What kind of man would take away millions of Americans' health care just because a black man created the ACA? A petty, little tyrant named Donald Trump.