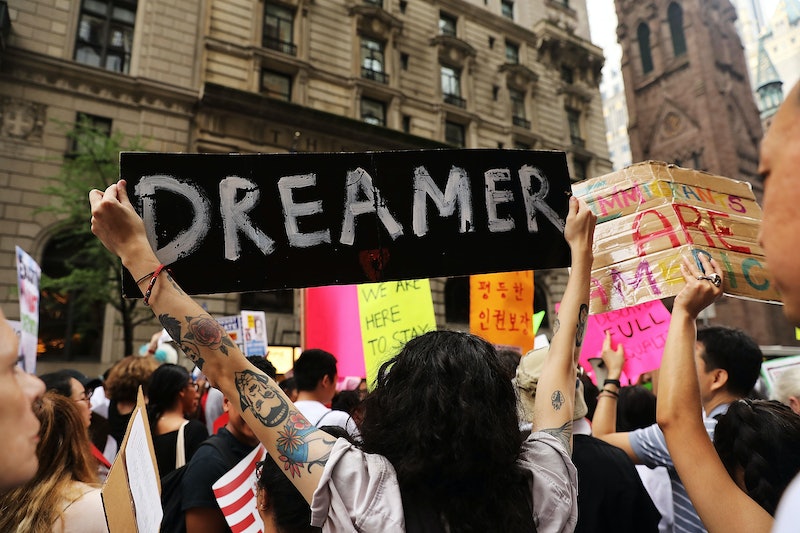 The Deferred Action for Childhood Arrivals program may be the next Obama-era program on the Trump administration's chopping block, according to a new report published by Politico on Sunday. Donald Trump has reportedly decided to end the program, which protects undocumented Americans from deportation and confers them certain legal rights if they came to the country as children. The DREAMer program will likely be one of the most consequential political topics in coming months, so it's crucial to know how to argue in support of DACA. UPDATE: On Tuesday, Jeff Sessions announced during a press conference that the White House plans to "rescind" DACA.

DACA was established by President Obama via executive order in the summer of 2012 to protect undocumented immigrants who were brought to the United States before they were 16. The program garnered nearly 800,000 participants and enjoyed popular support with the American people according to recent polls. Trump had been threatening to end the program since his campaign, but left DREAMers in limbo until this week. Industry leaders and thousands of marchers across the nation tried to convince Trump to keep the program in place, but White House sources confirmed to Politico on Sunday that Trump had decided to end the program.

No doubt you're going to run across a comment from someone who says they're glad those illegals are leaving their country, because they're not real Americans! You're going to be furious and want to ralph woke word vomit, and you should. Social media exists as the perfect opportunity to semi-anonymously critique other people's behaviors in a polite and public manner. You may be concerned about calling that person out on a digital platform, but public statements deserve public responses. Besides, if you stay calm and stick to a few rhetorical principles in your conversation, you have a chance at really connecting with someone.

The most effective way to argue in support of DACA is to flip the whole issue on its head. Remind people of the scope of the program, and discuss whether this is an issue that the nation should really be focusing on at all. There are less than one million DREAMers — that's less than one percent of the population of the United States — and 97 percent of them are gainfully employed or enrolled in school. This is a population that's contributing to society and the economy, to the tune of $460 billion in gross domestic product, and fighting to stay in the United States.

So why is the federal government, and more specifically, the Republican party, so insistent on removing them from this country? Why are we as a society wasting federal resources on this non-issue? Barring their immigration status, there's no reason that the federal government should be singling out DREAMers as a group.

Why not just give them citizenship, or at least promise not to deport them and let them live their lives? And why is the DACA repeal supporter personally invested in seeing these people suffer? Because make no mistake, there will be suffering. Families will be separated, mothers will lose their children, people will slip into poverty. And for what? Where is there justice in this?

DACA isn't dead yet, and if enough people get woken up and realize that the program just makes sense, the American public might be able to save it. It's everyone's duty to create public discourse about these issues, because DREAMers themselves need the safety of true anonymity right now. American citizens must exercise their privilege to spread the truth about DACA.