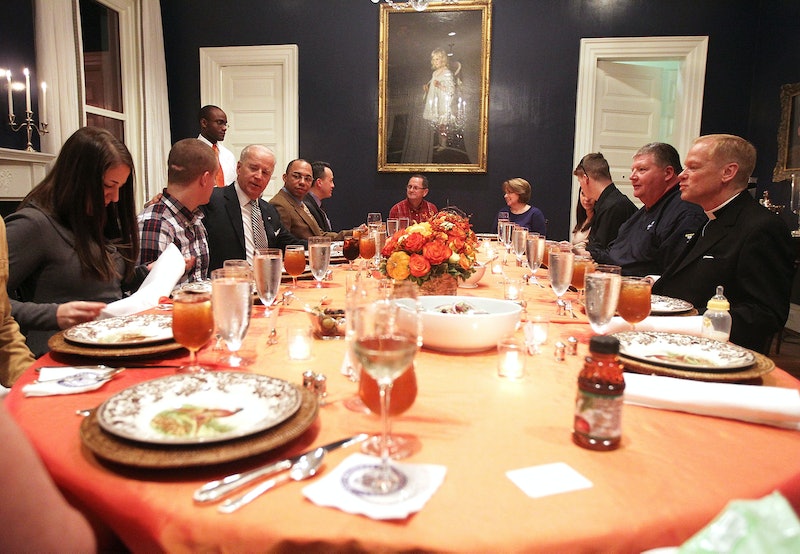 I'm not going to lie, I like to argue. And you know what? I'm good at it. I take on Donald Trump and his terrible policies for a living, and I'm not afraid to go head-to-head with any of his minions. And do you know why I'm not scared? I worked in the Obama White House. I spent years of my life crafting policies that protected the most vulnerable Americans. Every man, woman, and child in this country should have a shot at the American dream, and I'll be damned if I let anyone convince me otherwise.

This Thanksgiving, like so many Thanksgivings before it, American families will gather to remember all that they’re thankful for. Some will give thanks for the love of their family and friends, some for the support they received during a particularly difficult time, and some may be thankful for President Trump.

Even though he didn’t win the popular vote, he did win the electoral college and become the 45th president of the United States. His supporters are out there, and you might even be related to one of them. So this Thanksgiving, between discussions of mashed potato recipes and the latest cousin engagement, you might find yourself seated next to a Trump supporter.

That’s why you need to be prepared to have a conversation with your family members about politics this year. You need to be able to articulate, clearly and compassionately, why Trump is bad for our country, and how his actions after taking office are actually making America terrible again. If we’ve learned anything in 2017, it’s that if you don’t stand up for what’s right, you are complicit in what’s wrong. And because I like to argue, I’m going to tell you just how to do it — and win.

Argument One: When your relative says, “Politics don’t belong at the Thanksgiving table.”

Look, I get it. Politics isn’t the most comfortable discussion topic with family, especially if you know they disagree with you, and especially if some of your family members enjoy some sort of privilege. You might be even less eager to talk about politics with them than they are with you. But that’s also why you need to do it.

If your family is white, you really need to be prepared. Here’s why: Trump won a majority of the white vote. More so than any other racial or ethnic group, if your relatives are white, you’ll probably have a Trump voter at your Thanksgiving feast. No matter what, you need to be ready and willing to engage those family members. You also need to be willing to go head-to-head with the relatives who defend themselves by saying they didn’t vote for Trump, but may still support some of his actions or haven’t taken a strong stance against him.

We’re less likely to regularly interact with people who disagree with us than ever. That means there’s less and less room to understand where another person is coming from — and less opportunity than ever to change their minds. If you live in a liberal city, initiating a conversation about Trump at your Thanksgiving dinner table might be more valuable than anything you’ve shared on Facebook.

Let’s be clear: These aren’t normal times. Normal standards of decency don’t apply. Trump threw those standards out the window when he said he’d “grab [women] by the pussy,” when he made fun of a reporter with a disability, when he tried to ban travelers from seven majority-Muslim countries. The stakes are simply too high to sacrifice conversation for comfort.

This also comes back to privilege. If your family is white, or wealthy, or any other kind of privileged, you might not feel as compelled to interrupt your turkey and gravy to speak up. That’s exactly why you have to. The people who have the most to lose are already doing all they can to stop Trump. We must all act with the same urgency, especially if you or your family is privileged, because when one of us is unsafe because of our skin color, or sexual orientation, or gender identity, all of our values are threatened.

Argument Two: When your relative disputes your statistics and launches into “alternative facts.”

Congrats, you’ve officially started a conversation with your Trump-loving relatives about our Commander-in-Chief! I know how hard that was, and you should be proud that you got them to engage. Now, the bad news: your relative just started spewing alternative facts, ones you know to be misleading or just flat-out wrong.

If this starts happening, pause the conversation. You’re not going to change their wrongly-held beliefs, but you can share your personal experience, if you feel safe and comfortable doing so. Facts can be disputed, but your story can’t.

For example: If you’re talking about Trump’s latest move to end copay-free birth control and one of your relatives disputes your statistic about why women use birth control, bring the conversation back to you. If you use birth control to help treat a medical condition, you can bring that up, and explain how important it is to have affordable birth control to keep your condition under control. If you used it to be able to put yourself through college and start your professional footing off right, say so. Of course, make sure you’re comfortable sharing that information with your family, and don’t ever do so if you feel like sharing your story would put you in any danger.

If you can share a personal story or connection, take advantage: Not only does research show that personal stories are an important way to change people’s minds, but if you’re spending Thanksgiving with your family, they probably care about you a great deal and want the best for you. If your story touches them, it might even change their minds about an issue as divisive as birth control.

Argument Three: When your relative gets angry, or defensive, or says, “This isn’t how I want to have this discussion.”

Remember, your goal isn’t to argue for argument’s sake — it’s to provide a new perspective for your Trump-loving relatives. So don’t let the conversation turn into a screaming match, or into an argument about which one of you is a better, more noble person. You’ll never change anyone’s mind that way. Hell, you might even make them more convinced they’re right.

What that might mean is that you leave a particularly contentious topic off the table, at least for now. Or, it could mean that you start small, over something you have in common, before working up to a tougher topic. Whatever you do, don’t make Thanksgiving into a self-righteous affair, no matter how passionate you are and how personal this is. This conversation isn’t about you: It’s about putting your ego aside, and trying to make this country a little bit more inclusive and a little bit more open-hearted this Thanksgiving, relative by relative.

And because this isn’t about who has the best argument, you should be prepared not to “win.” You should know going into the conversation that it’s likely only the start. Best-case scenario: You are able to change someone’s mind, but then they say, exasperated, “I just don’t know what to do about it!” So, do your research before you go in. Look up a few local organizations that do work on that issue and mention them to your relative. Find some local or national charities, and suggest your relative commit to donating to them. If you find some common ground over, say, the role of unions, consider think about following up in a few weeks by emailing your relative a relevant article

You won’t change everyone’s minds this Thanksgiving. However, if you lead with civility and kindness, but also determination and conviction, and stick to your goal of having a discussion and not an argument, you just might find that this Thanksgiving dinner unexpectedly satisfying.

More like this
I Spent 2 Years Trying TikTok’s Dating Advice
By Kailynn Johnson
Watch Jacinda Arden’s Devastatingly Honest Resignation Speech
By Sam Ramsden
What The UK Blocking Scotland’s Gender Recognition Bill Means
By Sam Ramsden
8 Charities To Donate To During Black History Month
By Alexis Morillo
Get Even More From Bustle — Sign Up For The Newsletter
From hair trends to relationship advice, our daily newsletter has everything you need to sound like a person who’s on TikTok, even if you aren’t.