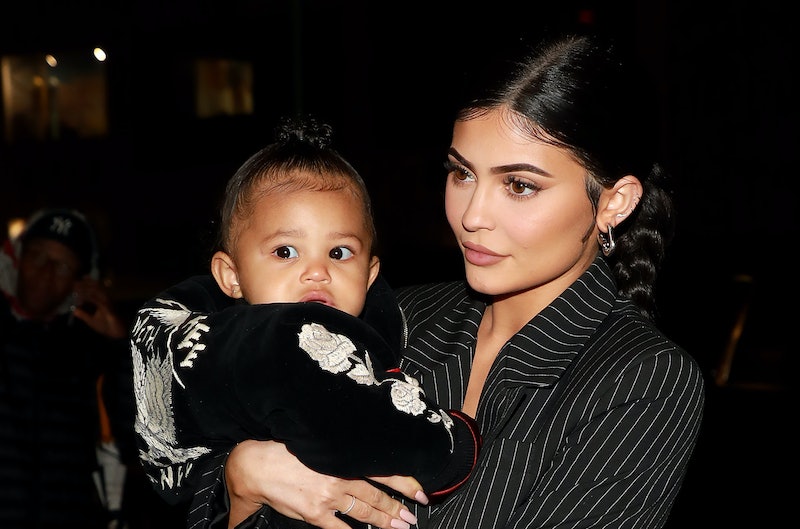 Kylie Jenner is known for her endlessly creative makeup innovations, including collaborations that have seen her working alongside pretty much every member of the Kardashian-Jenner family. But one relative she's yet to work with (for obvious reasons) is her daughter Stormi. That is, it seems, until now. In an adorable turn of events, Kylie has revealed she is set to release a V-day line and it looks like Stormi is involved in some major way. Here's everything we know so far, including how to buy the Kylie-Stormi Valentine's collection in the UK.

Kylie first revealed the exciting news via Instagram. The star posted a semi-cryptic — yet kind of obvious — hint that she's working alongside her daughter on her upcoming collection, with a picture of Stormi leaning over imagery of the new products. In front of super cute Stormi is layouts of products with the title "Kylie Cosmetics Valentine's Day Collection 2020," as well as another print-out that shows a product (presumably from this very line) that is adorned with butterflies and Stormi's name on the packaging. The caption simply read, "coming soon.. ☺️💜🦋."

Initially, there was little news in terms of what the collection would include, but the original Instagram picture featured a number of swatches, and one palette that has a red/yellow/orange colour scheme.

However now Kylie has shown off more of the collection to her Instagram followers, and the range features a stunning nine-shade palette, as well as plenty of lip products.

It was also initially unclear when this collection would drop, but many speculated it could be on Stormi's birthday, which is Feb. 1. This date was later confirmed when Kylie decided to erect a huge billboard on Santa Monica Blvd in LA with the date Feb. 1.

Next, she held a huge party to celebrate Stormi's birthday and the launch of her line. Everything was covered in butterflies and looked amazing, and the colour scheme was purple.

Kylie shared a bunch of beautiful pictures on her Instagram, as did her sisters who also attended the party.

The big question is whether it'll be available in the UK. Presumably, much like all of Kylie Cosmetics' launches in the past, it will only be available to buy over here through the brand's U.S. based website. Currently there are no official UK retailers for Jenner's beauty goods, but perhaps that could all change in 2020. Mass beauty corp COTY acquired a majority share of Kylie Cosmetics at the end of 2019, which could possibly signal changes to the brand and where and how it is sold in future.

While Stormi is not even two years old yet, it comes as no surprise she has become involved with her mother's beauty business, considering her apparent early love of makeup. Kylie has previously posted videos of Stormi playing with makeup, and having fun doing so. And it looks like pretty soon the cute tot is going to be able to play with her very own products!

This article was originally published on Jan. 3, 2020