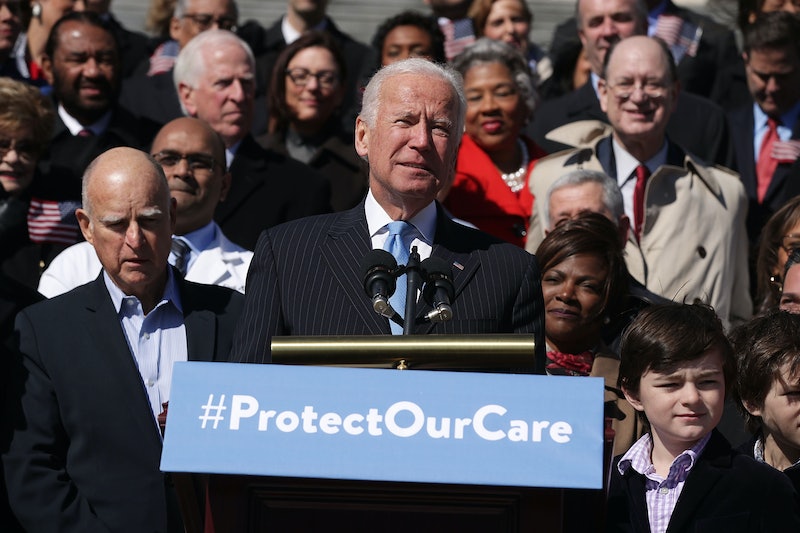 On Thursday, the House passed the bill to repeal the Affordable Care Act with a voting margin of 217 "yes" votes to 213 "no" votes. However, there is still time to make a difference. People can call their senators to protest the Affordable Health Care Act before the Senate votes on it.

The narrow win in the House means the GOP-drafted AHCA will head for the Senate next, where a win may prove even more difficult. With the assumption that no Senate Democrats will vote for the bill, if even two Republicans vote against, it will be halted — at least temporarily.

With these stakes in mind, it's important we remain vigilant in calling our representatives and placing pressure on them to defend the health care of the millions who would lose coverage if the AHCA is made into public policy.

And it's also not too difficult to figure out the best way to contact your senators. The first and most important step is finding your representatives, and there's an online Senate directory you can click on here. You can choose your state in the drop-down menu, and the contact information — including the phone number and website — for your two senators appear.

You're almost certainly not going to be talking to your actual senator. In fact, if the phones are overloaded, you may be on the line for a while before you can even talk to one of their aides. However, the upshot is that it means you will have time to prepare what you want to say.

Some sites have actually created scripts, so you know exactly what to say when you get someone from your senator's office on the line. For example, believe it or not, the Harry Potter Alliance, an activist group, has been tweeting out scripts for calling representatives and senators about the health care votes. You may or may not want to leave out the Voldermort references:

Here is another example of a script that would work:

Hello, my name is _______. I am a constituent of Sen. _________, and I am calling to ask them to vote against repealing and replacing the Affordable Care Act with the American Health Care Act. I want to relay a clear message to them that it's critical that the provisions and benefits of the Affordable Care Act remain in place. Since its passage, 20 million Americans have gained health care coverage, and our country is enjoying a record low uninsured rate.

If you feel comfortable adding your own experiences, you can add something like:

I have personally benefitted from the Affordable Care Act by [having access to free contraception, getting coverage even with my pre-existing condition]...

And if this matches how you feel — and to hit the point home extra hard — feel free to let your senator know that the Affordable Care Act is an issue you will vote on in the next election:

I will be following how my senator responds to the American Health Care Act, and it will factor into my vote come their time for reelection.

Calling senators may not seem like that a big deal, but flooding the phone lines with your concerns is critical to how a democracy works. More importantly, showing the politicians who represent you that you significantly care about an issue — so much so that you'll be willing to back their opponent in an upcoming election — can have a lasting impact. If keeping the Affordable Care Act is something you care about, now is the time to let your senator know that you're watching them closely and that you won't forget how they voted come election time.

More like this
Scotland's First Period Dignity Officer Has Sparked Backlash
By Darshita Goyal
11 Upper Back Exercises That'll Help You Stand Upright
By Carolyn Steber
How Did Pilates Become So Popular?
By Elizabeth Narins
How This Founder Inspired A New Wave Of Drinking
By Jordan Murray
Get Even More From Bustle — Sign Up For The Newsletter