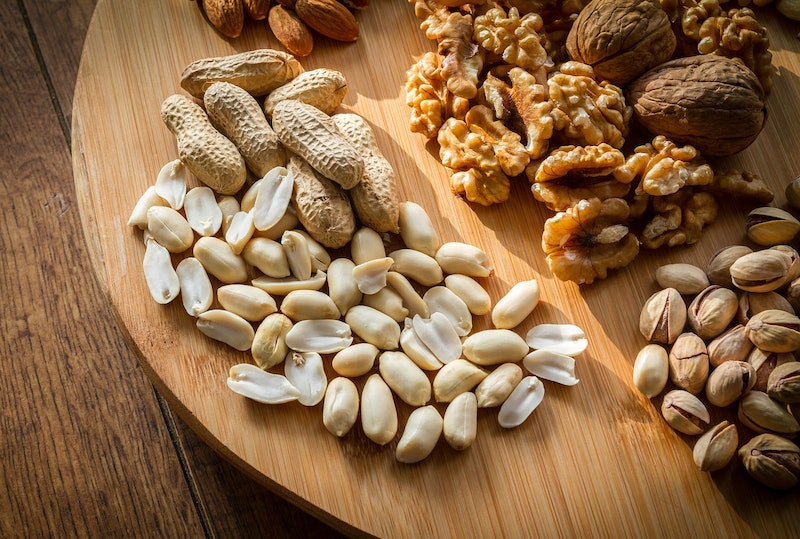 When I was a kid, my brother and I loved peanut butter so much that a common request was, "Mom, can I have a hunk of peanut butter?" What we meant was that we wanted a spoonful of creamy deliciousness. If you want to celebrate National Peanut Day Sept. 13, there are other ways to show your love aside from eating peanut butter straight from the jar, though that's fine too. And, are you ready for your mind to be blown? According to the website National Day Calendar, peanuts actually aren't even a nut.

"Likely originating in South America around 3,500 years ago, this legume is not a nut. They grow underground like potatoes," the website revealed. "Since they are an edible seed that forms in a pod, they belong to the family Leguminosae with peas and beans."

Unless you're allergic, peanuts are actually really good for you. They're high in antioxidants, vitamin E, magnesium, niacin, phosphorus, B6, iron, selenium, and zinc. "But when paired with other nutrient-rich foods, studies have shown this amazing legume helps us absorb nutrients better," National Day Calendar noted.

If you can't go a day without eating something peanut flavored, then National Peanut Day is for you.

How To Celebrate National Peanut Day

If you're feeling really adventurous you can cover yourself in peanut butter, though it looks pretty sticky and messy. If you'd rather pay homage to you favorite non nut by eating it instead, there are tons of ways to partake. And, you have Dr. George Washington Carver to thank for making peanuts a part of your life.

"Carver, who had already been researching this amazing groundnut, suggested farmers diversify into peanuts," National Day Calendar noted. "It was an economic boon to southern farmers. He published his research, How to Grow the Peanut and 105 Ways of Preparing it for Human Consumption, in 1916. His continued research resulted in more than delicious uses for this goober, groundnut or ground pea. From shaving cream to plastics and cosmetics and even coffee, Dr. Carver’s appetite for the peanut seemed to be unending."

Basically, you can make pretty much any meal, snack, or dessert with peanuts. If you want to venture out to some more all natural ways to enjoy nuts after you've exhausted Carver's 105 peanut recipes, I love Julie's Real nut butters, which come blended with other flavors like cinnamon, coconut, and more. Because, when you eat a lot of nuts, it's nice to mix it up every now and then.

If you're a really hardcore peanut lover, there is a National Peanut Festival in November with your name on it. It's basically like a fair totally dedicated to celebrating peanuts where you're encouraged to eat peanut-related foods for days on end. If you can't make it to Alabama for the festival, consider hosting a peanut potluck with your family and friends, and ask everyone to bring a peanut-based dish. Unfortunately, any peanut allergy pals will need to sit this one out.

If you need some games for your peanut potluck, consider some peanut trivia. Here are five fast facts about peanuts from the website Foodimentary to get you started.