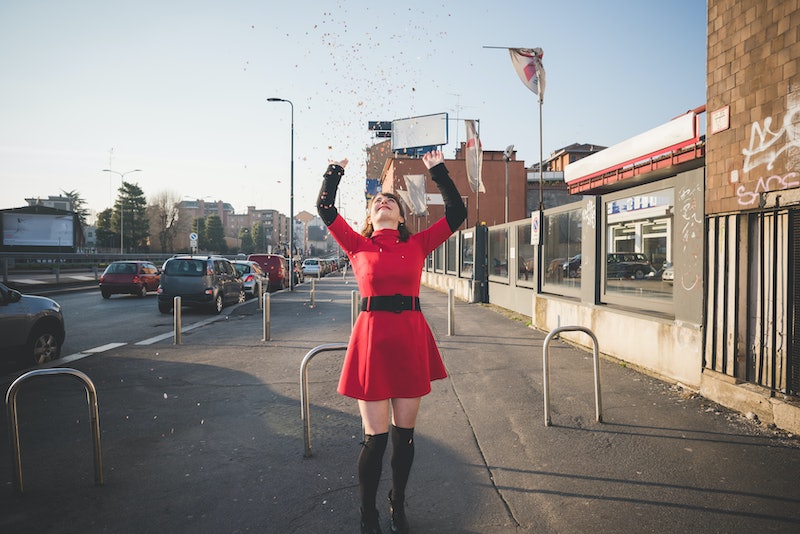 As I'm sure you've noticed, celebrating Valentine's Day has gotten a bit out of control. If you're in a relationship, you may feel like you have to spend money you don't necessarily want to on an extravagant dinner and lavish gifts. If you're single, you may feel like you're supposed to play up to this idea that you hate being single and go out and publicly commiserate with your girlfriends. But, frankly, I think we're too old for this sh*t. There's no need to act out this bad rom-com version of Valentine's Day. Instead, you can totally handle it like a grown-ass woman.

And despite what many think, being in a relationship can actually make Valentine's Day even more complicated. "Couples learn to dislike Valentine’s because of the pressure to be romantic, to do something special, and the disappointment when it doesn’t go right," Tina B. Tessina, aka Dr. Romance, psychotherapist and author of Love Styles: How to Celebrate Your Differences, tells Bustle.

So whether you're in a relationship or not, it's time to take the day back into your own hands. I'm not saying not to celebrate it — if you want to, you should totally go for that. Instead, let's starting handling it with some maturity and perspective — and throw some of the ridiculous expectations out the window.

It's time to celebrate Valentine's Day like a grown-ass woman, and here's how:

Take The Pressure Off

First off — don't overthink it. If you're single on Valentine's Day, who cares? It's not the end of the world. Go and do something nice to treat yourself if you want, but also remember you can ignore the whole day completely if you want. It only has as much significance as you give it. So the first step towards being a grown-ass woman is to not get in a tizzy just because you feel like you "have" to.

And if you're in a relationship? It's totally cool to ignore it or celebrate it, if you want. You can make it significant without stressing yourself out about it. "You don't have to break the bank to celebrate Valentine's Day, or to prove how much you love each other by spending more than you can afford to," relationship coach and psychic medium Cindi Sansone-Braff tells Bustle. "There are so many simple, inexpensive, creative, and romantic ways to say 'I love you,' and these gifts of the heart will make lasting memories that neither one of you will soon forget." And they probably mean more than a fancy piece of jewelry you found last-minute in a Valentine's Day sale.

The one thing that I would say all women can really get out of the holiday is a little moment to reflect on how they feel about it and why. Does it make you panicky? Why is that? Maybe you're in a relationship and the Valentine's Day is giving you a knot in your stomach — what does that mean?

And it's not all negative when you reflect either. Maybe you're single and couldn't give AF about it, that's awesome — just take note of it.

So you don't need to stress over the holiday, but do take a moment gauge how you're feeling about it — it can reveal something about you and your current relationship situation.

Don't let Valentine's Day bog you down – whether you're in a relationship or not. Instead, take however it made you feel and use it to move forward. Maybe you've realized you really want to get in a relationship or that you're happily single. Or maybe it made you see how happy you are in your relationship now and remind you that you want to keep working to maintain such as successful one. Whether it's a positive or negative day, you can use it.

"Happiness is overall life contentment," psychologist Anita Marchesani, Ph.D. tells Bustle. "It does not mean that you never or rarely feel sad, disappointed, rejected, bored, or angry. Trying to avoid negative emotions does not automatically make you joyful, nor does it add to your overall life satisfaction." So instead of thinking of Valentine's Day as some massive event, the mature thing is just to take a note of your instinctive reactions to it and how the day went, then take that and move forward.

Valentine's Day has gotten so ridiculously larger than life, it's not surprising that people find it to be a difficult time. But you're a grown-ass woman — you don't have to give it any more power than you want. Acknowledge it with as much significance as you want to, gauge how you feel about it, and then let it become whatever makes the most sense for you.