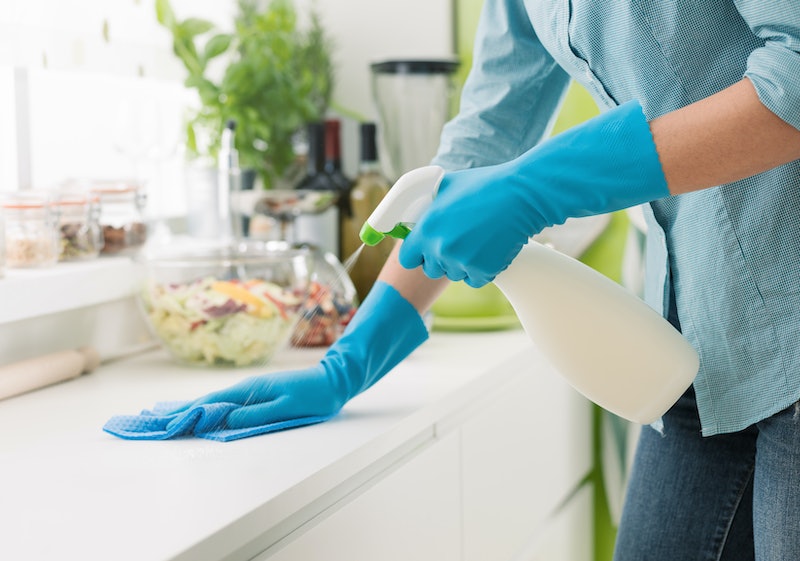 If you haven't gotten the flu this winter, consider yourself lucky — the infection is now considered widespread in every state but Hawaii, according to the Centers for Disease Control and Prevention. You may be taking precautions to avoid the brutal illness, but what do you do if a roommate or loved one has the flu? It might seem like you're fated to get the flu if someone in your home has it, but that isn't necessarily the case. If you know how to clean your house when someone has the flu, you'll face a lesser risk of contamination. Bustle spoke with Lisa Yakas, a microbiologist and senior certification project manager at NSF International, a public health and safety organization. Yakas says living in close quarters with a sick person can make it harder to avoid the flu.

"It’s not a bad idea to keep your distance from family members who might have the flu. If possible, the sick family member should stay in his/her room and use a separate bathroom from the rest of the family. They should take their meals away from the rest of the family and avoid common areas of the home…like the kitchen, living room and shared bathrooms," she tells Bustle. But it’s not always possible to isolate yourself from a sick family member, especially if you live in a small home or apartment… or you are the caregiver." But cleaning regularly can make a difference.

The best thing to do to de-germify your home is to sanitize everything the sick person comes into contact with, and to have them use their own designated things that aren't shared with the rest of the house. Even if you've asked your flu-stricken roommate to quarantine themselves, it's unavoidable that they'll still be touching things around your shared home. Yakas recommends using separate utensils and devices when someone has the flu. "Have them use their own cup and eating utensils. Don’t share a keyboard, telephone, iPad or remote control with someone who might have the flu," she tells Bustle.

Weirdly enough, if you're taking care of someone in your house, getting rid of their germy detritus isn't as bad for you as you might think. You likely aren't keen on the idea of touching a sick person's used tissues, but they're actually safer than a surface like a doorknob. "If it’s a soft tissue that someone used to cough or sneeze, the virus will last about 15 minutes," Yakas says. "However, germs could last up to 24 hours on hard surfaces."

On those hard surfaces, you should be using chlorine and hydrogen peroxide to kill all flu germs. While airborne disinfectant sprays are sometimes touted as a way to combat the flu, Yakas says she can't say whether Lysol and other airborne disinfectants are effective "because NSF International has not conducted any studies on the effectiveness of disinfectants on airborne flu." The CDC says that extra-hot temperatures can kill the flu virus (above 167 degrees Fahrenheit), along with cleaning products that contain chlorine, hydrogen peroxide, detergents, iodine-based antiseptics and alcohols. Check the ingredient list of any product before you buy.

No matter what you're cleaning in your house, make sure you're wearing gloves and/or washing your hands thoroughly before touching any non-contaminated surface. Yakas says that surfaces can spread the virus, but it's most often spread through contact with an infected person.

"The main way the flu is transmitted is by direct contact with a sick person (like shaking hands, kissing and hugging) or by breathing in the virus after someone sneezes or coughs," she says. "So with the flu it’s important to cover your mouth and wash your hands and avoid touching your mouth, nose and eyes."

These are her top tips for avoiding the flu:

It can be scary to think about the flu, especially if you're living with someone who has it, but if you're adequately prepared and clean your apartment often, you'll be less likely to get sick yourself.