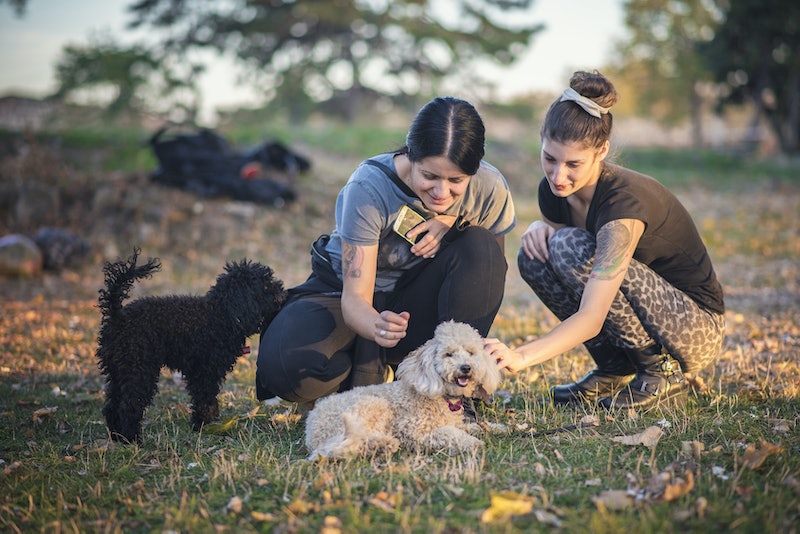 When my girlfriend and I decided to part ways a few years ago, our cats weren't too excited about living apart. With many couples opting to parent pets instead of children, the decision about how to co-parent your pets after a breakup is something more couples are taking into consideration when they split up. When we moved in together, my cat Ted fell in love with my girlfriend's cat Bam Bam. After Bam Bam passed away from cancer, a kitten named Ziji was added to the mix, and Ted promptly fell for her too. When Ted is separated from his beloved, he mopes around and basically goes on a hunger strike, which made it clear that we were going to have to share custody of the cats if he was ever going to eat again.

"Breaking up is hard for the people and pets in our families. Though emotions may run high, try to remember that you both love your pet and that your furry family member deserves to have their wellbeing considered in the breakup," Aimee Gilbreath, executive director of Michelson Found Animal Foundation, tells Bustle. "New homes and new schedules can cause distress in pets too and can even result in illness, trauma, and behavioral issues." If you find yourself in the position of having to share custody of a pet with an ex, there are some things you can do to make the transition smooth for you and your furever friends.

My ex and I are still great friends, and we decided we would share custody of Ted and Ziji based on which one of us is traveling. She travels a lot for work, so during those times the cats live with me. When I am traveling, or she is home for an extended period of time, the cats live with her. While it's no secret that most cats don't love riding in cars, Ziji and Ted get over the traumatic hour-long treks from North Hollywood to west Los Angeles pretty quickly because they love being together more than they hate the car. As soon as we open their carriers at their new location — we refer to it as their country house and their beach house — they adjust within minutes as if they've always been there. And, truth be told, we both love having the cats around.

"Also remember that pets are a huge source of companionship and emotional support for us humans and be generous in finding a way for both parties to access that furry comfort during the pain of a breakup," Gilbreath says. "Plus, your pet is attached to both of you and will benefit from spending time with both parties. My ex-husband and I stopped living together three years ago and though I am the primary care 'parent' our dog still gets very excited to see him when he comes to visit."

However, Animal Behaviorist Marc Bekoff, author of The Animals’ Agenda: Freedom, Compassion, and Coexistence in the Human Age, told The Cut that sharing custody of pets is sometimes more beneficial to the humans, especially it it's just one pet that you're passing back and forth. This is why it's ultimately best to do what's right for your animal, even if that means saying goodbye. "It’s incumbent on the humans to take into account who the particular dog is," he said. For example, if your dog or cat gets anxious when they change environments, it might be best to keep the pet at one primary home and have the other pet parents come for visits.

"You can customize a custody arrangement that serves your schedule and situation — everything from a weekday/weekend tradeoff, to swapping every week or two, to being the pet sitter when the primary care pet parent travels," Gilbreath advises. Since I have had dogs and cats since I was 21, and I have moved almost 20 times, my pets have lived with a lot of other pets. There have been pets of partners and pets of roommates, and usually the pets part ways without any problems because they're generally more attached to their humans than they are to each other.

However, Ted and Ziji's bond made me and my ex realize that the best thing to do for us, and for them, was to share custody. This ensures that not only do these in-love-feline friends get to stay together, but that each of us also has a free, built-in pet sitter, because pet care is not cheap. If you do decide to co-parent your pet with an ex, one of the most important things to consider is that reinforcing the same rules and routines at each house will make the transition easier for everyone.

"Regardless of which schedule you choose it is important to work together to minimize the stress your pet feels and create a routine that works for your animal," Gilbreath explains. "This means both parents need to maintain the same boundaries and rules — for instance, if you don’t allow your dog on the couch, this needs to happen at both homes. Consistency in food is extremely important for their sensitive digestive systems. Pick one type and brand of food and agree to use that at both homes and feed the same amount at the same times."

Ultimately, it's up to each couple that decides to go their own ways to agree on the best way to co-parent their four-legged family members. If the breakup is amicable, and you part as friends, it's going to be much easier to make it happen. If the breakup is volatile, you're not on speaking terms, or you're leaving an abusive situation, there are obviously other things to consider, like the safety of you and your pets. If you are leaving an abusive relationship with a pet, the National Domestic Violence Hotline offers tips on how to create a safety plan to ensure you and your pets are both able to safely escape the situation.

For couples who decide that the relationship has just run its course, the shared bond of pet can help you transform your relationship in a positive way. "While you may no longer be housemates, the bond of a pet can help bridge some emotional differences and sharing photos and playful anecdotes can be a 'safe' subject of conversation that helps you weather the transition in your relationship," Gilbreath says. And, TBH, co-parenting our cats has helped my ex and I develop a deeper friendship, and neither of us can imagine our lives without our furry feline friends, or each other.

More like this
GIRLI & Q Fell In Love At A Skatepark & Never Looked Back
By Jessica Morgan
TikTok’s Viral “Rating Game” Is Exposing Everyone’s Icks
By Courtney Young
13 Summer Solstice Quotes To Celebrate The Longest Day Of The Year
By Sadie Trombetta
Are Gemini & Leo Compatible In A Relationship?
By Kristine Fellizar
Get Even More From Bustle — Sign Up For The Newsletter