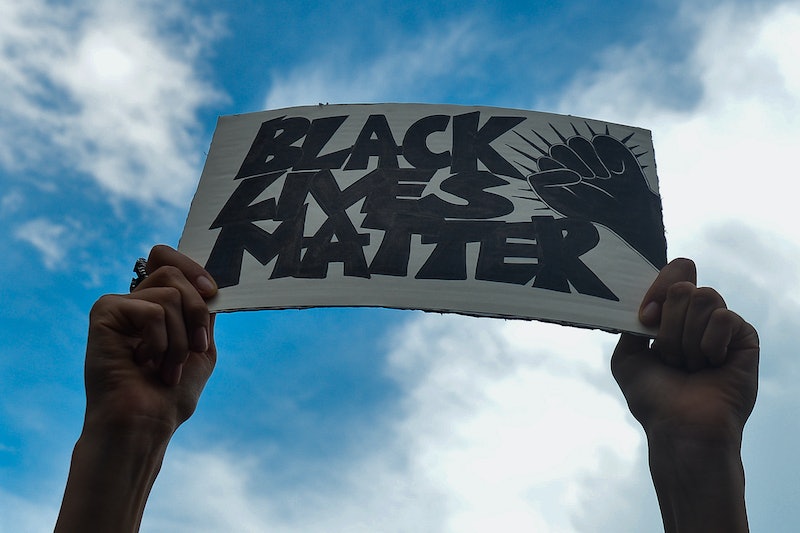 Social media can feel like a minefield right now. Whether it's your aunt digging her heels in about "Blue Lives Matter," your old college friend declaring that looting is the "wrong" way to protest, or endless Twitter back-and-forth about curfews and police brutality, it can be tempting to wonder if confronting racist posts on social media can ever achieve anything. Experts say that it really does — and that standing up to racial microaggressions and subtle racist behavior online is a good way to begin change, though it's nowhere near enough.

"All the research on microaggressions shows that when people say things that are subtly racist, the most common response is to not respond," Rob Eschmann Ph.D., assistant professor at the School of Social Work at Boston University and an expert on racial inequality and microaggressions, tells Bustle. "So those ideologies are reproduced and not challenged, and people think that they’re an OK way to think about race. People may not even realize they are being racist."

Social media, he says, has its advantages. It can allow racism to reproduce unchecked, but it can also amplify marginalized voices. (Though sometimes it acts as a gatekeeper, too: witness the uproar around the alleged racial bias in TikTok's algorithm in early 2020.) Twitter, Facebook, or Instagram can make it easier to confront racism when you encounter it.

"It's different when you're in a meeting with work colleagues," Eschmann says. "You may not want to speak out because you think this may impact your work relationships, your job security. But online, the stakes feel lower, and it's easier to find support." If you speak out on social media, you may find yourself buoyed by the support and likes of others.

Pushing back on online racism is important because it can show up as silencing, demeaning, or deflecting racial issues. Jokes and memes about race, people responding to Black Lives Matter with Blue Lives Matter or All Lives Matter, and concern about property damage during protest all function as ways of shutting down validation of Black experience and trauma.

"People aren’t posting saying, ‘Black people should be killed.’ They’re posting, ‘All lives matter.’ And on the surface level, this is not racist," Eschmann says. "But the idea that Black lives don’t deserve extra attention is ignoring all the data on Black lives and racial inequities."

People who post about All Lives "draw upon a rich history of turning down the volume of gasps for breath and pleas for justice," Marcia Chatelain Ph.D., associate professor of History and African American Studies at Georgetown University, tells Bustle. "Their organizing principles are simple: Deny, deflect, demean, dominate. Deny the system is broken. Deflect any responsibility in the suffering of others. Demean blackness. Dominate resources and institutions."

In this context, saying something on social media really is a valid way of fighting racist behavior. "Racism reproduces itself through styling and not being named. It’s embedded in our everyday interactions and policies, whereas most people are not OK with overt racism," Eschmann says.

How To Push Back Against Racist Social Media Comments

There are two schools of thought when it comes to confronting racism online. "You can speak your mind and not be concerned about how the other person takes it. Or you can try to have a productive conversation," Eschmann says. Sometimes being angry and saying what you want without worrying about their reaction can be cathartic. "If they’re offended by your challenging racism, that extends beyond you and what you’re trying to say," Eschmann says. "Racism is sufficiently traumatic for people of color that they should not have to be unemotional when challenging racism."

The other way of going about confrontation is to make the conversation less personal. "You could say, ‘I understand why you think this, but this is part of a longstanding ideology — the idea of meritocracy, the idea that the police are here to protect us. But Black folks are disproportionately arrested, get longer sentences for the same crimes as white peers, are more subjected to police violence.'" This steps away from calling somebody a racist with a capital R, and focuses on raising counter-narratives and presenting facts to help change that person's point of view.

These conversations may end up being difficult. The Greater Good Institute at Berkeley recommends that you might want to rehearse your response to racist social media content several times before you commit to it. Write out a draft and take your time over it. You may want to initiate a DM or a phone call if you feel the person would receive your comments more openly in a more intimate format. And, particularly if you're a person of color, take notice of how much emotional labor you're spending on educating others.

No matter what approach you take — trying to be understanding, or speaking out because you've reached your limit — you're doing a good thing. "When these things are not challenged, people think they are OK and that’s how racism reproduces," Eschmann says. "People can use this platform to speak out. And the more people who do this, the more we can be anti-racist, versus just being colorblind."

More like this
These Artists Are Reimagining Black History Month To Create A Better Future
By Katie Mitchell
25 Inspiring Quotes From Black Women To Celebrate Black History Month
By Kyli Rodriguez-Cayro and JR Thorpe
11 Super Bowl Instagram Captions To Use On Game Day — Even If You Don’t Like Sports
By Alexis Morillo
Flip Phones Are Gen Z's Favorite New Nightlife Accessory
By Maria Santa Poggi
Get Even More From Bustle — Sign Up For The Newsletter
From hair trends to relationship advice, our daily newsletter has everything you need to sound like a person who’s on TikTok, even if you aren’t.