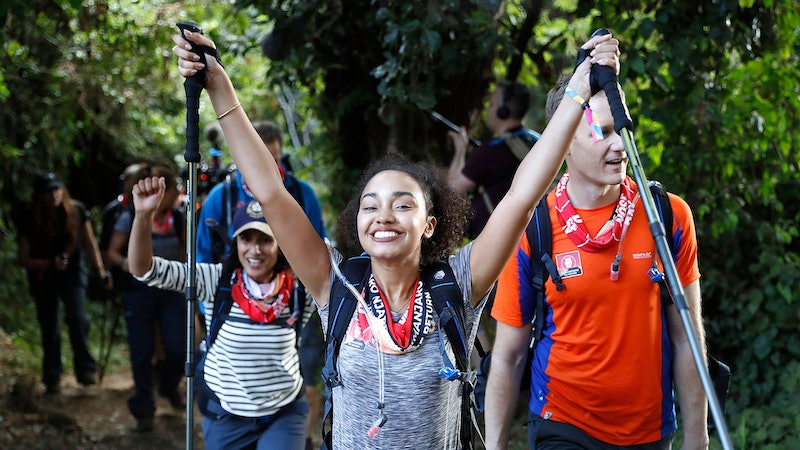 Red Nose Day is upon us once again, and that can only mean one thing: celebrities making fools of themselves and taking on ridiculously tough challenges for our TV viewing pleasure — all in the name of charity, of course. This year, a batch of daring celebs set out to conquer Africa’s highest mountain, Mount Kilimanjaro, in order to raise funds for Comic Relief. So, if you'd like to do your part for the charity, and support the famous faces who braved the tricky African terrain, here's how you can donate to Comic Relief 2019.

The Red Nose Day BBC special is titled Kilimanjaro: The Return, and you can make a donation to Comic Relief on the donation page featured on the show's official website. Alternatively, you can donate over the phone by calling 03457 910 910, or by post — and the details of how to do so are featured on the official Comic Relief 2019 website. According to the Mirror, the one-hour special will air on BBC One at 9 p.m. on Wednesday, March 13, and will be a highlight of the Comic Relief 2019 TV marathon.

As reported by the Mirror, it took the famous climbers a total of seven days to make their way across the mountain, which stands at a massive 5,000 meters tall. Difficulties faced by the celebrities during their charitable trek included sub-zero temperatures, high altitude and exhaustion — however one major issued faced by Love Island's Dani Dyer was the lack of hygiene, after she reportedly revealed that body odour was more difficult to put up with than altitude sickness and blisters. Live links and short clips of the famous volunteers have already been shown on the BBC and ITV. Previously, some participants called in to This Morning live from the African mountain, and later on updated viewers with their progress on BBC Breakfast and The One Show.

Kilimanjaro: The Return is not the only Comic Relief special to make a comeback in 2019, as just last week a celebrity edition of The Apprentice aired on BBC One. According to Digital Spy, the two-part special saw the likes of BGT judge Amanda Holden, TV presenter Rylan Clark-Neal and comedian Russell Kane take on the infamous boardroom and face the ever-intimidating Lord Sugar.

When speaking to OK! Magazine, Clark-Neal described his Apprentice experience as "the worst three days" of his life. He said: "The Apprentice was potentially the worst three days of my life! You’re only allowed to do certain things at certain times, which is obviously what makes a TV show. It was like I was a contestant on The X Factor again where you’re not in control. I’ve worked so hard for the last seven years to be in control of when I go for a wee. And to be told I can’t go for a wee yet, I just found it really difficult!"