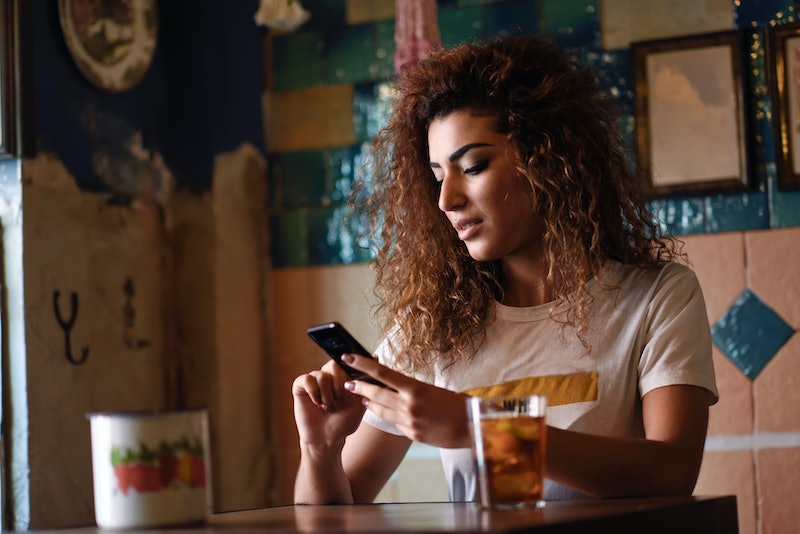 If you're going sober or reducing your drinking for the first time and are finding it difficult, you may feel a bit isolated — but you're definitely not alone. The idea of going sober for a month, or longer, is becoming more common. Alcohol-free cocktails and drinks are one of the trendiest sectors of the beverage industry, with the American market for low or no-alcohol drinks like Seedlip (a personal fave) projected to expand by 38.8% by 2022, according to Forbes. The benefits of going sober for a while are numerous, but if you're trying to reduce your alcohol in the long term, rather than doing Sober September and returning to your normal drinking patterns, the first few weeks can be tough.

If you're recovering from alcohol use disorder, the decision to get sober can be very challenging — and the first month can be horrendous. Anna David, CEO of Light Hustle Publishing, a New York Times bestselling author who has been sober for 18 and a half years, tells Bustle, "At first it’s completely disorienting to go from living a life that’s revolved around drinking and blotting yourself out and then suddenly have everything be so real. Feelings can be so raw." However, people go sober for many reasons, and alcohol use disorder doesn't have to be one of them. Health is also an important consideration. "If you’re someone who’s sober curious or quitting drinking in order to get healthier, you can expect to just feel a million times clearer," says David. "You’ll find your skin brighter, your sleep better and have a lot more energy."

A month of sobriety can be enough time to make a difference to your drinking patterns in general and to your physiology. A study published in 2019 by the University of Sussex found that people participating in Dry January in 2018, in which they abstained from alcohol for the entire month, experienced long-term benefits. Six months later, participants drank an average of one day less a week, and the amount they drank dropped as well. Out of the 800 participants, 54% had better skin and 88% had saved money.

It can also make a physical difference; a 2017 study published in the British Medical Journal on the effects of taking a month off drinking found small reductions in liver fat, insulin resistance, blood pressure, and other health measures. Getting through those first four or so weeks with a drastically reduced alcohol intake can make a big difference. If you encounter issues, though, you're not alone.

"Managing other people’s expectations can be challenging," Ruby Warrington, author of Sober Curious and founder of non-drinking club Club SÖDA NYC, tells Bustle. "Friends and family will have questions or may be confused about your choice." The issue, she says, is often that they believe your decision to go sober means you're judging their choice to keep drinking, which can make them defensive or upset. Moving past this means making it clear you're just cutting out alcohol for yourself; Warrington suggests saying, "I'm trying this to see how it feels," and not engaging any further.

If you're going sober, you may find that being around people who are drinking makes life hard because it makes you want a drink yourself. Studies have shown that communal social drinking situations have a very long history in human culture, going back tens of thousands of years, so it's natural that a pub or cocktail bar with hundreds of happy people may make you feel like having a drink or three. Wanting to avoid bars is perfectly valid and normal, experts tell Bustle. If you're worried that people will think you're no fun any more because you don't want to drink, you can suggest other activities to cement relationships in other ways. "Arrange to meet friends for a yoga class or other non-drinking activity," Warrington says. This, she tells Bustle, shows them that you still want to hang out with them, while also avoiding the pressures of a drinks-heavy situation.

It's also worth keeping in mind that a month isn't a very long time, and trying out sobriety for four weeks is just a taster; it doesn't indicate how you'll feel about sobriety forever. "My greatest piece of advice is: don’t make conclusions about how you feel about sobriety because it’s a guarantee that your feelings will change," David tells Bustle. "I can’t tell you the number of people I’ve met in early sobriety who say they’re miserable, and then I run into them months later and they’ve never felt better." This applies both to people recovering from alcohol use disorder and to people who just want to take a break for a bit; if it's challenging for a while, that's OK.

If you're finding it hard to keep on track, especially if you're going sober (as opposed to drinking a very small amount), reminders can be helpful. As with giving up any substance, sustaining your motivation can be tough. It can be a good idea to remind yourself about why you're doing this. "It’s really helpful to write down all your reasons for quitting or taking a break," Warrington says. "Keep the list somewhere easy to read." She recommends keeping it positive, focusing less on what you're cutting out and more on the gains you want to get from sobriety.

If you're not planning to go sober entirely and want to drink a little, keeping limits can help. "Think the drink through," David says. "It may be easy to imagine the first drink and how great it will be, but try to think about drink seven. Or any place that drinking brought you that wasn’t so wonderful." Experts say keeping inflexible limits, however, can make them harder to stick to. This is an experiment in your own wellbeing and health, not a law. "Maybe you’ve quit for life, maybe it’s just temporary, but either way, putting that sort of pressure on the situation is unnecessary," David tells Bustle. Keeping your period of lower drinking to a month is a good way to understand how you might feel about it long-term, but also means you have the flexibility to shift your arrangement as you see fit.

Ultimately, the first month of sobriety or reduced drinking can be a challenge, but it's a worthwhile experiment if you'd like to see how you react to the experience. The fact is, experts tell Bustle, you've made this choice for a reason. "Trust your instinct to take a break," Warrington says. A month-long break can make a real difference, and will also pass in a flash.

More like this
How Ovulation Affects Your Sense Of Smell, Libido, & More
By JR Thorpe and Lexi Inks
The 11 Benefits Of Aerial Yoga, According To Trainers
By Carolyn Steber
All The Reasons Your Gums Bleed When Brushing Your Teeth
By Carolyn Steber
Ashamed Of Your Screen Time Stats? Here's How To Change That
By Alexis Morillo
Get Even More From Bustle — Sign Up For The Newsletter
From hair trends to relationship advice, our daily newsletter has everything you need to sound like a person who’s on TikTok, even if you aren’t.