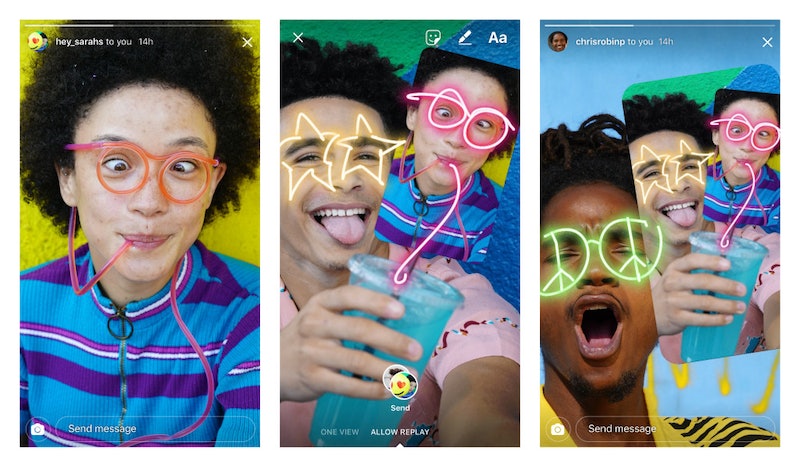 There are a lot of reasons I shouldn't be given the power to edit and draw on my friends' photos, but the biggest one is that there is roughly zero chance I won't draw something funny on the photo, like a pair of Harry Potter-inspired glasses or something. Still, Instagram is daring to give me — and every other user on the app — the power to do just that. In a new update released Tuesday, Instagram introduced their new "remix" feature, which allows users to edit, draw on, or even add stickers and emojis to direct message photos their friends send them. They can then send the photos back, and as a result, their friend will be able to edit the previously edited photo even more than it already is. I know, it sounds a little complicated — but trust me, figuring out how to edit a DM on Instagram is super easy with remix.

The biggest thing to remember is that you can only edit photos that are sent back and forth on DM — not in public stories, and not in Instagram posts that live on your feed. Remix is strictly confined to DMs with your friends, in order to keep the experience as personal as possible.

So, how do you use the new feature? Let's take it step by step.

1. Open The App And Take An Instagram Story Pic

This is probably something you do every day. Don't overthink it, just open the camera and pose to your heart's delight. Here, I went for a Kardashian-inspired selfie look.

2. Choose The Contact You Want To Message, And Send It Off

This is arguably the hardest step in the whole process: figuring out who to DM. I chose to send my selfie to my boss, because I'm a professional. Also, she was sitting right next to me and I had her full consent. ¯\_(ツ)_/¯

3. When They Respond, Open Their DM And Hit The Camera In The Bottom Left Corner

As you can see, I got a response! Yay! Now, if I want to edit the response, I can do so by clicking the camera button in the lower left corner of her response photo to open the Instagram story camera again. Now, with her response photo in the corner, I can begin my edits.

4. Figure Out How You Want To Mess With Their Photo

Here's the fun part: Figuring out what you want to add to their photo. As you can see, the image of her response photo on the upper right corner is totally customizable, so you can move it around and make it as big or as small as you want.

5. Draw On Their Photo, If You Want, Then Send It Off

I decided I wanted to make her response photo big enough to take up the whole screen. Totally doable thanks to remix! Once I cropped the photo to my liking, all I did was hit the take photo button in the bottom middle of the screen to trigger the markers and stickers options. Then, of course, I drew glasses on my boss' face. (What else did you expect from me? I literally told you I was going to do exactly this.) Once I was satisfied with my creation, I hit the send button.

And that's it! I've remixed! The idea is, once your friend receives a message you've remixed, they can then remix it to their liking before sending it back, and so on. Hopefully, if you do it long enoigh, you'll get a hilariously remixed picture that's about five DMs in one. The future really is here, isn't it?