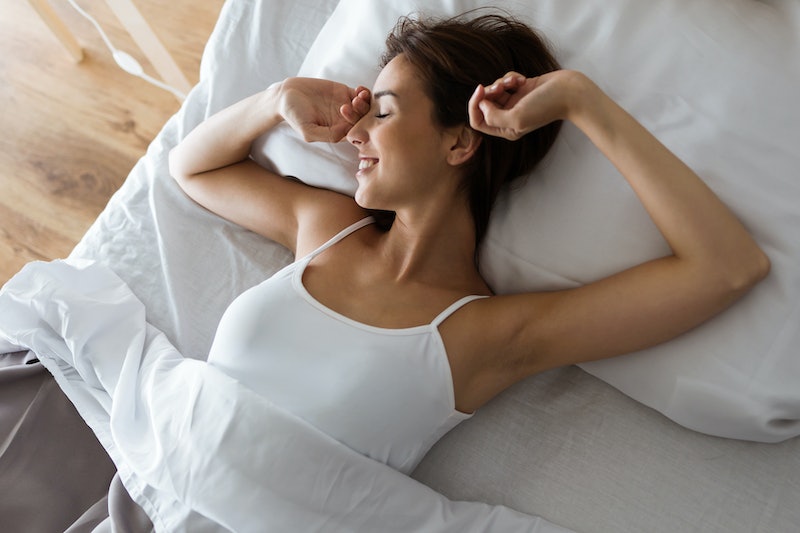 When counting sheep just doesn't cut it, where do you turn to figure out how to fall asleep faster? One of life's cruelest ironies is that while children are able to sleep as soon as their heads touch the pillow, they never actually want to go to bed. Adults, on the other hand, understand the importance of a full night of uninterrupted shut-eye, but they never seem to have enough time to get it. Even if you manage to wrangle your schedule into giving you eight hours in bed each night, it can take a while to actually fall asleep. The worst part? Worrying about how long it's taking to fall asleep can keep you awake longer.

Whether you're a chronic insomniac or a regular napper, we all have our personal tips and tricks for snoozing quickly: meditation, white noise machines, or other relaxing activities. But if you feel like you've tried everything and your mind still won't stop racing, you may want to try the tactic described in a new study in the Journal of Experimental Research.

It's no secret that anxiety can disrupt sleep, with people laying awake for hours as they mentally review everything they didn't accomplish that day. For that reason, psychologists at Baylor University in Texas decided to see if keeping a pre-bedtime journal influenced people's ability to fall asleep. In the study, they monitored the sleep patterns of 57 people between the ages of 18 and 30 overnight in a sleep lab. Before hitting the hay, everyone completed a five-minute writing assignment.

The catch? Participants were divided into two groups. One group was asked to write a "completed list" describing everything they accomplished in the past few days. The other wrote a to-do list laying out what they needed to remember to get done in the next few days.

As the participants slept, researchers gathered data about their eye movements and brain wave activity. When they crunched the numbers, they found that people who wrote to-do lists before bed fell asleep nine minutes faster than the ones who wrote about what they had accomplished. In fact, the longer and more specific their to-do lists were, the quicker people fell asleep. Oddly enough, the opposite was also true; people who wrote longer completed lists took longer to snooze.

"Therefore, to facilitate falling asleep, individuals may derive benefit from writing a very specific to-do list for five min at bedtime rather than journaling about completed activities," researchers concluded.

According to the professor who led the study, Michael Scullin, it isn't enough to merely go over your to-do list in your head. He told Time that the act of writing it down seems to help people let go of their worries. "It gives them some relief from... rumination," he told the magazine. In psychology, "rumination" refers to going over a problem again and again in your head. When you toss and turn until 3 a.m. wondering how you're going to have time to have time to cook dinner before kickboxing class tomorrow, for example, you're ruminating.

Given that millions of Americans have trouble falling asleep at least a few times a month, it's no wonder so much research has been poured into figuring out how to sleep better. Dozens of studies have tested ways to fall asleep faster, coming up with solutions that range from the obvious to the unexpected. If you're not into the idea of jotting down a to-do list before bed, try taking a hot shower, turning on the air conditioner, and wearing socks to warm your feet. It also doesn't hurt to put away the electronics that beam stimulating blue light directly into your face. Instagram will still be there when you wake up in the morning, and you'll probably enjoy it more when you're well-rested. Don't let the bed bugs bite!