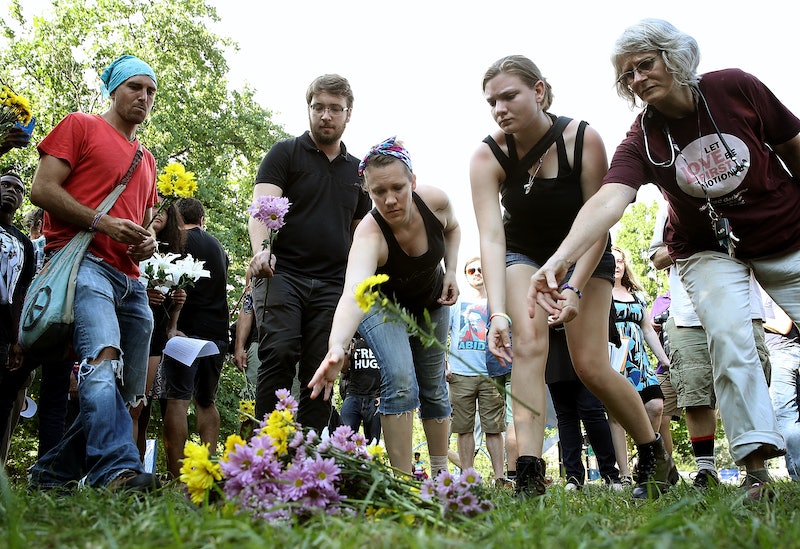 The Charlottesville protest was all that dominated social media feeds on Saturday. Photos and tweets from the clashes between white supremacists and counter-protestors depicted horrifying scenes of violence. For the majority of those watching the events unfold on the TV or on Twitter, it can be disheartening to see such violence at home and not be able to take action. Here's how you can fight back for Charlottesville — for its largely progressive residents, for the people were injured in the protest, and for those who were there taking a stand against white supremacy.

You've probably seen how graphic and bloody the clashes at the protest were. At least one person died and several others were injured after a car rammed into a group of counter-protestors. Later on Saturday, President Trump said in a speech that day that "many sides" were responsible for the "hatred and violence" in Charlottesville, once again refusing to forcefully denounce the white nationalists who support him.

If you're furious about this — as you should be — channel the anger into concrete action. Whether it's having a frank conversation with a neighbor, joining a vigil, organizing a peaceful demonstration, or volunteering your time a civil rights group, there are productive ways you can fight the hate and violence that you saw take place in Charlottesville on Saturday.

1. Have Difficult Talks With Those Around You

If you're a white person, now would be a good time to step up. Talk to those in your community about the difficult things. Confront their — and your — biases. Christian Picciolini, a former white supremacist who founded Life After Hate, a nonprofit that helps those who renounce hate groups in America, told HuffPost in an interview: "White people need to solve the problem of white supremacy. It’s white people’s problem, we created it, and it’s a problem we need to fix."

"I don't see color" has to be among the most ridiculous responses to charges of racial bias, because no one ever not "sees" color. There's nothing wrong with acknowledging differences between people. Teach your children — or your niece, nephew, or your friend's kid — about the ways in which the system is built to oppress minorities. Teach them to embrace differences and constantly challenge their own biases.

This is a simple, effective one. Fighting policies that negatively target people of color does work — remember when your calls to your elected officials helped kill the Obamacare repeal bills? Now, you should call them to make sure they denounce Trump's lackluster response to the Charlottesville violence. The more pressure you put on them, the more likely they are to pressure Trump on this.

It can be volunteering for an organization to help tutor children outside of school. It can be attending the many vigils that will take place in the wake of the Charlottesville violence. But you must show up.

You must give your support and commit to combating the hatefulness you see around you. You must acknowledge that you benefit from the system in some way, and find out how you can be a better friend, co-worker, neighbor, parent, child, and citizen. Now's the time your support means the most.