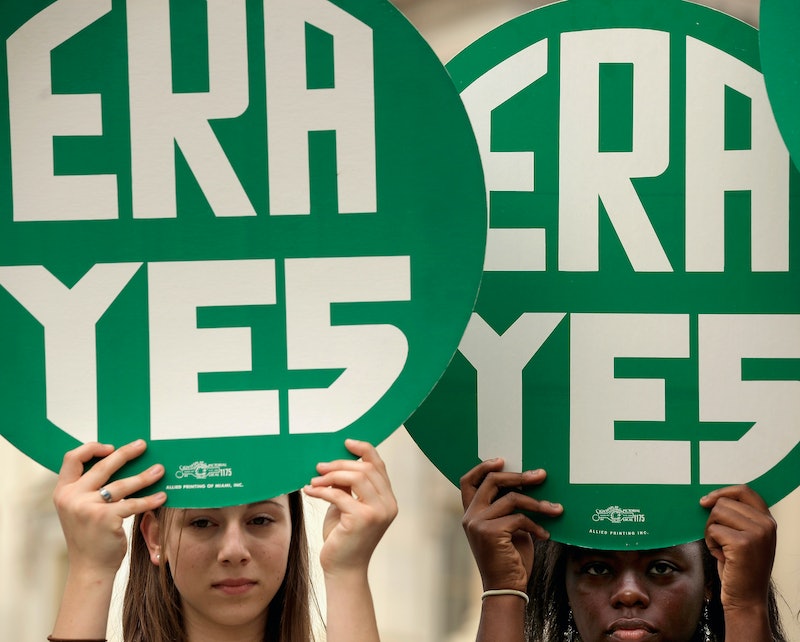 March 22 marks the 45th anniversary of the U.S. congressional passage of the Equal Rights Amendment (ERA), which guarantees American women equal rights under the law. However, while the amendment passed Congress, it has not yet been ratified by enough states to incorporate it into the Constitution. Thus, it is still important to fight for ratification of the Equal Rights Amendment to ensure that it becomes part of the law of the land, once and for all.

Once Congress passed the Equal Rights Amendment on March 22, 1972, it was sent to the states for ratification, as are all constitutional amendments. For an amendment to become law, three-fourths of the states must ratify the amendment. Unfortunately, the ERA falls just short of this requirement. Since 1977, the ERA has been three states away from ratification.

However, in an invigorating move, Nevada's state assembly approved the ERA this week after decades of dormancy and will very likely ratify the amendment after the measure goes through the state senate. Nevada's move to pass the ERA demonstrates both the importance of continuing to fight to get the law ratified as well as the viability of actually making significant headway in doing so, even 45 years after Congress initially passed the amendment.

Thus, in honor of the ERA's 45th anniversary of Congressional passage and with the hope of making 2017 the year that the amendment finally becomes federal law, here is a list of ways you can help fight for the ERA and ensure its ratification.

One of the main strategies for ERA ratification is known as the "three-state strategy," which seeks to get three more states to ratify the ERA in order to achieve the aforementioned three-fourths ratification and render the amendment law. Hopefully, as Nevada moves very close to ERA ratification, this strategy will be referred to as a two-state strategy, rendering ratification even closer. While the official ratification deadline passed years ago (in 1982), many legal scholars believe this deadline has little legal standing and if three more states ratify the amendment, then it will very likely become law.

Thus, if you live in a state where the ERA has not yet been ratified (you can find a list of the states here, which are mostly located in the West and Southeast), then it is exceedingly important that you contact your state representatives and ask them to introduce or support ERA ratification legislation.

It is also important to contact your Congressional representatives to advocate for passage of the ERA, regardless of the state in which you live. The other main strategy for ERA passage and ratification involves having Congress reintroduce and pass a new Equal Rights Amendment. The bills requesting reintroduction are known as HJ 33 and SJ 6 for the House and Senate versions, respectively. The ERA coalition recommends contacting your congressional representatives directly to request passage of these bills and thank them for sponsorship if they served as co-sponsors.

Furthermore, the Coalition also requests that you ask your representatives to pass HJ 53 and SJ 5, which are bills that eliminate the deadline for the ratification of the current Equal Rights Amendment. While many believe that this deadline is not binding anyway, it certainly is preferable to have it removed in order to make any potential legal challenge to ratification unlikely should three more states choose to ratify the current ERA. You can write to your congressional representatives directly via the ERA Coalition's website, which offers a form email and contact information for every state's elected officials.

In order to help secure ratification of the ERA, it is also important to demonstrate the widespread public support behind the amendment. You can contribute to this public support initiative by signing the ERA Pledge on the ERA Coalition's website, which constitutes a public declaration of your support for the amendment. You can also add your name to the thousands of signatures on two petitions on Moveon.org and Change.org that express support for ratification of the Equal Rights Amendment.

It is also essential to monetarily support organizations that are heavily involved in the fight to pass the Equal Rights Amendment. The ERA Coalition's entire mission consists of securing passage and ratification of the ERA, for example. Furthermore, the Alice Paul Institute, named after the author of the ERA, has developed a comprehensive educational and advocacy website about the amendment and would certainly also be a wonderful entity to which to donate funds. You can donate to both of these organizations via their websites, which are hyperlinked above.

Finally, it is exceedingly imperative to raise awareness about the ERA to help secure its passage and ratification. Be sure to share information via your in-person and social media networks about why making the ERA a law is so important and about how its ratification can be achieved. You can use this helpful guide from the ERA Coalition about the necessity of the ERA for additional information. Furthermore, you can also encourage your friends and social networks to actively engage in the fight for the ERA through many of the initiatives mentioned in this article.

Overall, if enough Americans take the initiative to advocate on behalf of the ERA, it stands a very likely chance of eventually becoming law. The political environment in the United States is ripe for this, as Nevada's recent consideration of the amendment illustrates. Hopefully, we can all work together to make 2017 a historic year for codifying women's rights in the U.S. Constitution.