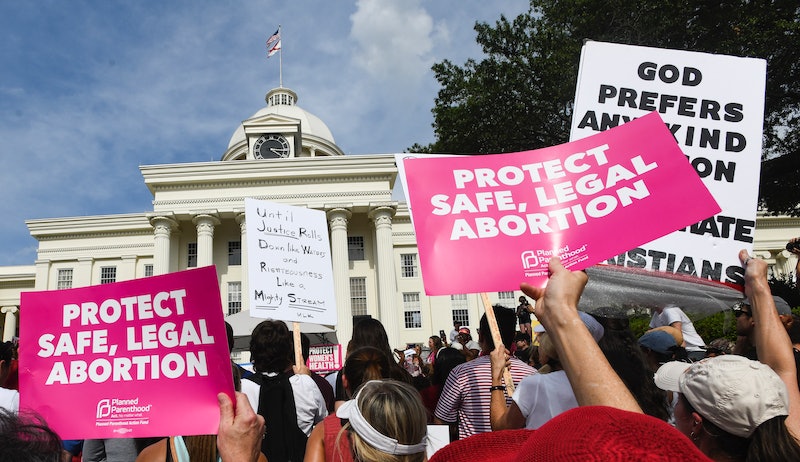 New laws drastically restricting abortion access have passed in a few states recently, and there's already a nationwide movement to protest them. On Tuesday, numerous groups organized events across the country to gather in support of reproductive rights. To join in, you just need to know how to find a #StopTheBans rally near you — and thankfully, the protest's website makes it very easy.

"Across the country, we are seeing a new wave of extreme bans on abortion, stripping away reproductive freedom and representing an all-out assault on abortion access," the #StopTheBans website reads. "This is Trump’s anti-choice movement… and it’s terrifying, particularly for women of color and low-income women who are most affected by these bans."

The protests are directed against the strict anti-abortion laws that just passed in Alabama and Georgia, but states across the country have been moving toward more restrictions on abortion because of what many anti-abortion advocates see as a Supreme Court friendly toward their efforts. In an effort to counteract this, then, numerous national and local organizations including the ACLU, EMILY's List, and the Planned Parenthood Action Fund have teamed up to organize the #StopTheBans events. These protests are set to take place at locations across the United States on Tuesday, according to the website.

"We will show up to speak out and fight back against this unconstitutional attempt to gut Roe and punish women," the website explains. "Politicians shouldn't be making decisions best left to women, their families, and their doctors. Together we say: Stop the bans."

In order to find out where and when your nearest #StopTheBans event is happening, just head to the website and scroll down to the map, which is immediately below the introduction. There you can either zoom in on your state or input your zip code or state, and it will tell you where to go. According to the website, most of the #StopTheBans rallies will happen at noon local time, but double check to make sure this is the case with yours, because it's not true across the board.

#StopTheBans is more than just a one-day, nationwide protest. As you can see on the Planned Parenthood Action Fund website, it's a whole week of action, calling on supporters to learn about the bills threatening their reproductive rights, get in touch with their state and federal representatives, and spread the hashtag so that more people find out about it. And because of the attention and backlash that the extreme anti-abortion bills in Georgia and Alabama have garnered, Planned Parenthood president Dr. Leana Wen argued in a Washington Post op-ed that this could actually be a big moment in the fight to guarantee full reproductive rights for everyone in America.

"Whether or not you think women’s health care is the most important issue, prioritizing it is just good strategy," Wen wrote. "We can use this moment to make this battle the fight of the next 18 months, and we can win not just the fight for reproductive rights but also the fight against this presidency and everyone who supports its extreme agenda."