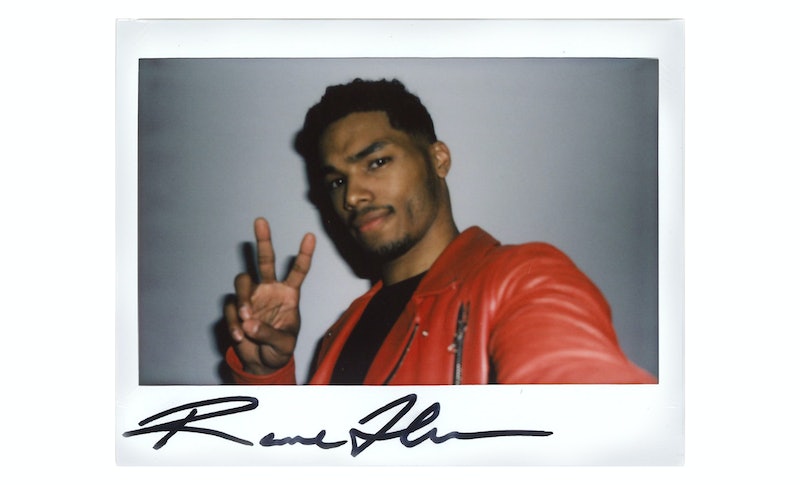 When celebrities hang out in the Bustle office, we want to give them the chance to leave their mark. Literally. So we hand them a pen, a piece of paper, a few questions, and ask them to get creative. The rest is up to them. This time, actor Rome Flynn is leaving his mark in the Bustle Booth.

"You can tell a lot about a person based on how they play basketball," Rome Flynn tells me. I've asked him about his favorite scene playing Gabriel Maddox, the mysterious newcomer to How To Get Away With Murder this season. Fans — and the Keating Four — have been struggling to figure out what to make of him ever since he showed up in the final seconds of last season's finale. Turns out, they could have just picked up on some body language during his and Frank's basketball pickup games.

"I really like the basketball scenes. I think it tells a lot about his personality," Flynn says of Gabriel. "His competitive nature, his determination, his ambition — you can see all of that wrapped in one when he's playing basketball."

As far as how Annalise and the group treat Gabriel, Flynn doesn't blame them for being skeptical of his intentions. After all, they've all been embroiled in crime and intrigue from day one and Gabriel, or any newbie, could blow the lid off all of that at any time. "I think they see him as a threat," Flynn says. "But I don't think Gabriel's a threat."

Gabriel's purpose, and his future, on HTGAWM is still a mystery as this season comes to a close, but Flynn's next moves are much more clear. The actor is starring in the upcoming A Madea Family Funeral as Jesse, a young man whose father's funeral ends up being planned by the infamous Tyler Perry character. And the comedy couldn't be more different from HTGAWM, which Flynn is excited about.

"I appreciate the responsibility that I have as a Black actor in playing different roles," Flynn tells Bustle. "I'd love to be in that universe of just doing something different. Like Jordan Peele does, and Lena Waithe, and Ryan Coogler, and all of these fantastic directors and pioneers. And I think that for myself, I really want that down the line. Hopefully."

If his celeb idol from his Bustle Booth is any indication, Flynn's already looking in the right place for #careergoals inspiration. Check out more of his answers to our Bustle Booth questionnaire below.